8 bullets, 8 zombies that want to bite you and a single flashlight... That you can't control.

A 2-player game about decision taking. Any player can reach consensus or end the game. Consensus is reached by flipping 8-bits around. We are the learners at the Artisanship in Videogame Programming Workshop in Chia, Colombia. Taller de Artesanía en Programación de Videojuegos en Chía, Colombia.

You are a robot, frantically trying to set the correct bits to gain points, for reasons that are unlikely to ever become clear.

Toggle bits, unlock actions, and curse as your movement options are reduced in your quest to gain points. Ultimately overcome the challenges and win the game (or not).

"The Naja species are a medically important group of snakes due to the number of bites and fatalities they cause across their geographical range."

If no sound plays, you may need to install a more up to date version of AVBin. Debian/Ubuntu ships with AVBin 7; we found AVBin 10 or 11 to work.

When installing wasabi-lepton, make sure you compile with llvm-gcc, which is known to work.

Tales of a Rogue Space Pirate

Fly around, destroy asteroids, and collect gems for points. We plan on expanding the gameplay to include Defender style levels accessed by landing on the planets in the overworld and turning this into a full game over the next few weeks.

Run as fast as you can avoiding dogs, horses, traps and hurdles.
And bit at least 8 chickens to pass the level.


Final game is pretty different from what we thought about.
Unfortunately we were not able to dedicate so much time to pyweek, so we upload what we made in spare time.

You are Pythonista an adventurer in an 8bit style world. You start in your safe village. Wander round to meet animals a people and perhaps find something useful... Use the WASD keys to move around. You can press the letter O to eat. To start your adventure, find the stripey portal and walk thru it and this will take you to the dungeon. If you end up fighting a monster, press F to strike. If you die you will return to the village. Find the diamond in the dungeon to get back home. Collect 8 diamonds and go through the portal to reach the Dragon. Good luck! Controls - See README.txt (includes cheats!) Developed on Platform Python 3.4 and PyGame 1.9.2a0

You control an ape of unknown origin who is desperately trying to avoid being bit by zombies.

Save all 8 bits is a puzzle game where the aim is to rescue all 8 bits on the board by avoiding obstacles, guns, and getting 'stranded'.

A puzzle/dexterity game about a photon lost inside a quantum computer. Your goal is to guide the photon to the terminal pad after activating eight 1-bit flip-flops. But the photon is very elusive and cannot be directly controlled. And hence you are given a set of block of various types that effect the photon's direction in some way.

The game is mainly controlled via mouse. Pick a block type from the menu on the left-hand side and place into the game field using a left mouse button. To delete a placed block, right click on it. If you use touch-pad, you may find left click + Shift or numeric keyboard key more handy. You cannot delete a level block, one that you did not place yourself.

Instead of using all 168 hours to make a PyWeek entry, we will only be using one. Our classic 8-bit adventure game will be created from 7:30-8:30 PDT on Thursday evening. Timelapse youtube video to follow.

Goodnight, Mr President is a JRPG set in the exciting world of American politics. Yes that's right, together at last!

Grab your Bill of Rights and some bribe money and find out what kind of President you could be.

In a time when dinosaurs walked the earth
When the land was swamp and caves were home
In an age when prize possession was fire
To search for landscapes men would roam.

A 'beat'em up' game with graphics simulating those of olden days.

The source code is in the file quest_for_fire.zip, but I suggest to run if from one of the other packages to avoid the 'first-run-lag'(models are in text files, the first time they load it take a while)

This is my second PyWeek the last chance, i learn a lot of stuff and now i ready to this. :)

solo entry again. hope to make something complete this time :)

A puzzle game where you must traverse to the exit in the dungeon, but almost all actions add or subtract from a running sum, where going below -127 (underflow) or above 126 (overflow) causes you to lose! See the readme file in the zip for more information on the rules and how to play the game.

“The angry bits are on the loose!
Show them who’s Boss by bombarding the right bits to regain the full Byte.”
Persevere and become the 8 bit champion.

HOW TO PLAY THE GAME:

The goal of the game is to fill out 8 bits to get the number designated by Number. You do this by dropping a bit, which will activate the first static bit it touches. When you activate the correct bits you will move forward to another number and raise your corect tries meter.If you hit an incorrect bit a new number will be generated for you, but raise your incorrect tries meter.

The game gets more difficult the more correct numbers you get. This is done by increasing the speed based on the correct tries and a random event, which gets more probable and fires more often based on that as well.

The game continues until all 255 numbers have been expired. The goal is to correctly fill out as many numbers as possible.

The game is inteded to run in a small screen as a break brain puzzler/arcade game.

Hey! We're a group of Grade 11 kids from Ontario, Canada who are all interested in the field of computer science. Our computer science teacher introduced us to the the PyWeek challenge and encouraged us to participate in order to test our skills. We are all very excited to get started and have a sort of real hand at the trials and tribulations of game development! We hope to have fun during our time. -101 Factorial

Destroy the enemy fleet situated above you.

Very much not complete - but gives you an idea of where I was heading with it.

A Flood It Clone. Dependencies are Python2.x or Python3.x and PyGame. An exe is compiled as well. The code structure is based off of Mekires work whom has taken me under his wing.

This initially wasnt meant to be a pyweek entry. In fact I never thought i could create a game within a week. Surprisingly this game, the majority of it only took two days, with the rest being polishing and bugfixes. Since it fits this weeks criteria and i created it during in the timeframe, I decided to upload my first pyweek game. Repo is at: https://github.com/metulburr/FloodIt

A remix of Bomberman and Balloon Fight with birds.

Gameplay:
You control the green bird.
Use a, w, d to control your bird.
Hit once to prepare a bomb. Hit again to throw it.
At the title screen, press 1, 2 or 3 to change the screen resolution.

"8-bit", a fun loving alien, is just trying to have a good time bouncing around while some mean, nasty aliens try and get in his way. Help 8-bit get past any obstacles that get in his way. 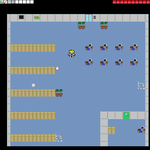 Overtime tells the story of Lenny, a computer technician working late and his attempt to foil a hacker. The game is a puzzle rpg with 8-bit style graphics.

Find your creators in search of answers.

The theme is cows, right?

Obviously, I thought of this for the bovidae theme, but couldn't think of anything better so I went with it. Hopefully it's pixely enough to qualify as 8-bit.

Uses python 2.7 and pygame. I'm not too experienced with packaging (cxFreeze), etc. so I hope everything runs ok.

A pseudo-3D rail shooter on the high seas. There are four stages. You should be able to handle the first two stages, the difficulty ramps up in stages 3 and 4.

See the readme for easy mode if it's too hard, or for low-res mode if it runs too slowly.

Less ambitious than my usual entry. Try to contain your disappointment. ;)

idle: a loss of resolution

Idle requires python 2.7 and pygame. That's all! Run the source distribution by navigating to the directory after expanding the zip file and running `python run_game.py`

If you need them, there are spoilers available on our entry page.

The year 204x. After the last World War the mankind has finally found a civilized way of dealing with their differences: the 8-BIT Grid System.

This is the story of unnamed heroes trained to load their minds into the world's grids as Battle Internet Technicians, although they like to call themselves Grid Runners.

The game requires at least OpenGL 2.0 and 960x720 resolution or better (windowed mode, although I tried it full-screen in a netbook with less resolution and it works fine).

The windows and Linux packages are ready to go!

Important: the source code version has a bug that may crash the game in Windows and Mac. Just comment line 72 in game/__init__.py. It's a bug in the shipped version of Pyglet. Sorry about that!

Post-compo updates will be released at Grid Runners.

The evil ocean master is sending his minions to destroy your walls and take your pearls! 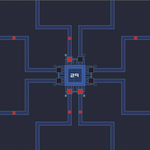 Follow instructions as a byte! A fast-paced arcade game, in recognition of the hard work of all the bytes in the world...