Please use BitTorrent to download all the games if you can - the site hosts will appreciate it. The torrent file is here.

In a distante future, there is a city, that is dying. The goal is to leave it at once. But there is a mad robot, that guard a way to the last rocket...

One Way Trip to War

Very simple game that uses the Logitech Rumblepad to shoot some targets.

I hope, this time, no unexpected matters avoid my participation :-) 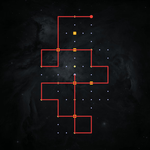 A minimalist path-building puzzle game. Made in one day.

So there's these dudes called the humans, and they are going along doing what humans do, which is fight wars between themselves and say "We should totally build spaceships!" Then one day, some guy actually built a spaceship. Because spaceships were in that year, everybody started building them. So soon the humans had united under one banner and were happily colonising worlds, when an alien threat appeared. Aliens who traveled the galaxy in eel-like bio-ships were looking for a new planet to call home after their old one was destroyed when its star went nova appeared on earth and started generally destroying stuff. The entire human fleet was wiped out easily. One ship remained. It was loaded with the most powerful superweapon known to man, an antimatter bomb, and sent down the throat of the bio-ship. Only if it can reach the heart of the beast will the bomb work, and only then will the ship, the eel, and the aliens be eliminated. And of course you get the fun job of carrying the hopes of all of humanity. So don't screw it up.

You're a ninja in the city! 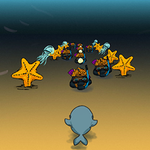 A story of a whale going great lengths to reach his unusual romantic interest.

Noro and Master47 are ready.

You are the captain of the Orpheus, an interstellar colonisation ship that has crash landed in an unknown star system. You have travelled across thousands of light years at near light speed, so although little time has passed for you, everyone you have ever known will be long dead. There is no turning back, you must push on and extend the reach of the human race. Orpheus is a turn based strategy game focused around resource management. Build up colonies across the planets of the (procedurally generated) system to gather enough resources to rebuild the Orpheus. Build mines to gather metal, fuel extractors to collect fuel and hydroponics modules to grow food. Construct a manufactory so you can build units such as the drone, which speed up building production, transports, which let you move drones and resources around, and settlers which allow you to colonise new planets. To load up a transport, colonise a planet, or send a ship to another colony, select it in the transport menu and either click on one of the resource loading buttons or a planet in the map. Fuel costs will be displayed next to the cursor when moving units in this way. These costs will be taken directly from the launch colony's resource supply. To move around the map click and drag, and scroll the mouse wheel to zoom in and out.

Everything you wanted to know about the reproduction of dandelions. Now in an interactive illustrated form!

A Western shoot 'em up. Code - Zia; Art - stiva and Zia; Level design - AxelsDawn and Blaze; Story - stiva and Blaze. WARNING: We really did not finish our game, so don't expect much when you try it. If you press 't', you can shoot at bandits which is rather fun... but other than that there's not a whole lot to it, we're afraid. It all fell apart a bit in the works. We'll possibly be back next time with a better game plan and hopefully lighter schedules!

Game idea is simple. Fly around in the sky with your jetpack as long as you possibly can. Get fuel to fly longer and stars for extra points. Watch out for airplanes!

The McA'Nulty Family's first attempt to produce a working program together. Wish us luck...

You are an exile sent to a prison colony planet. This is an MMO RTS based on Tower Defense battle mechanics. Yes, this is a multiplayer game. Yes, we are off our meds.

Solve mazes with the help or hindrance of colored doors.

"You are tripping. It is not the most friendly trip. Occult symbols are attacking you. There is one way to survive. You'll need to climb up... and up... and up..." It is hard game (game concept?) with unique (maybe?) game mechanics. You need to drag hands with mouse to move player up. As I've said -- it is hard game, so trackpad will not do. P.S. It runs on Python 3 and Python 2

Currently it is a tile based maze game that features a guy that digs up an ancient maze in his backyard and decides to explore it.

You control Charon's ferry around the Acheron river with arrow keys.
You have to take souls from the bottom dock to the top one.
Only souls carrying any gold object will pay you; kick rest souls away from the ferry before unloading by mouse clicking.

My entry to the PyWeek #15. Play it in your browser (only recent Firefox/Chrome and fast CPU work):

Oh, and since I forgot in the readme and don't want to make another submission just for that - all artwork is from opengameart.org.

A fallen world, hideous creatures stare from the distance. Their eyes send a chill through your spine.
You awake from your concussion and nightfall approaches...There is no turning back.

A game inspired by Robert Frost's The Road Not Taken. Read the README for installation instructions and controls.

Uncompress the ZIP archive and run "owt" in the "scripts" directory. It looks better in full screen mode, so try running owt with -f option (although depending on your graphic card/display it may not work).

All this information is available in the README.txt file included in the ZIP.

The game is available in two flavours: source code and windows binary bundle.

You are an outlaw on the run - and you need to get the hell out of town.

There's only one problem: the train has already left. Ok, two problems: it is also packed with law men.

Only one thing to do: load your six-shooter, saddle up, and chase that train down!

The exciting adventures of a colony establishing in a land from which no man has previously returned alive: A land of exploding dinosaurs.

A sort of turn-based pacman which involves Little Red Riding Hood gathering all the apples before the Wolf catches her.

To all testers: this game is incomplete. there is little to do in the game. you don't have to feel inclined to rate or play.I just had too much to do this week.

'W' Key will cause you to jump. Double jumps are allowed.

A game about a frog to get back home. Help the frog to return home. Required to run Pygame 1.9 and Python 2.7.

It's all about Russian Pig Peter! He wants to leave Russia on Tractor, but there're a lot of troubles on a way, such as police, petrol, houses and vehicles! Help him to get to the goal!