30% respondents marked the game as not working.
1% of respondents wished to disqualify the entry.
Respondents: 9

It looks like this pyweek between work, uni, study and a maths exam next weekend, I am going to have a severely limited amount of time to spend on building my game.

As for a game idea I am very happy that "One way trip" was the chosen theme, as i didn't really have anything good for the other teams.

Especially because of the super cool Mars rover mission that has started recently (well got to Mars recently) I really wanted to do some space based game. As such the game I hope to make, time permitting will be Super Science Space Explorer where you will have to send forth a collection of ships and probes to gather information about the solar system and earn science points and capture the public's attention to gain funding for future missions.

If I happen to get way ahead of schedual somehow it would also be really awesome to build in some online highscores or something.

Good luck to everyone and I hope your games progress well.

Not much time to work on my game today with a full on 8:30 - 8:30 day at uni, i have done a bit and have a got a camera that can move around and zoom in and out and such, I based it off an example by tartley (who's website seems to be a bit screwy at the moment?). Much frustration was had in trying to redo what I had already done a couple of years back but its all working ok now :)

Now I am just starting to get stuck in into some basic mechanics and am deciding physics to do with space stuff can be kind of hard to translate into a game, I wanted to do something kind of realistic but things are often made difficult when trying to decide what kind of scaling to use as everything in space tends to be rather spaced out, with lots of numbers in the range of 10^3 all the way out to 10^25 or so.

I am going to have a bit of a break and thinking of how to get around this, my first thought is to make my game a bit more arcadey and less realistic.

Well so far I have come to a dead end, with the complexity of different bits adding up to more than I have time for.

Currently I have got it to a point where it will show the paths of planets through time and you can zoom and move around nicely. However getting my simulating my rocket is just not working and I don't have the time or patience to fix it.

I am now going to start from scratch and go for a much much simpler arcade style game.

Screenshot of where I got to with graphics 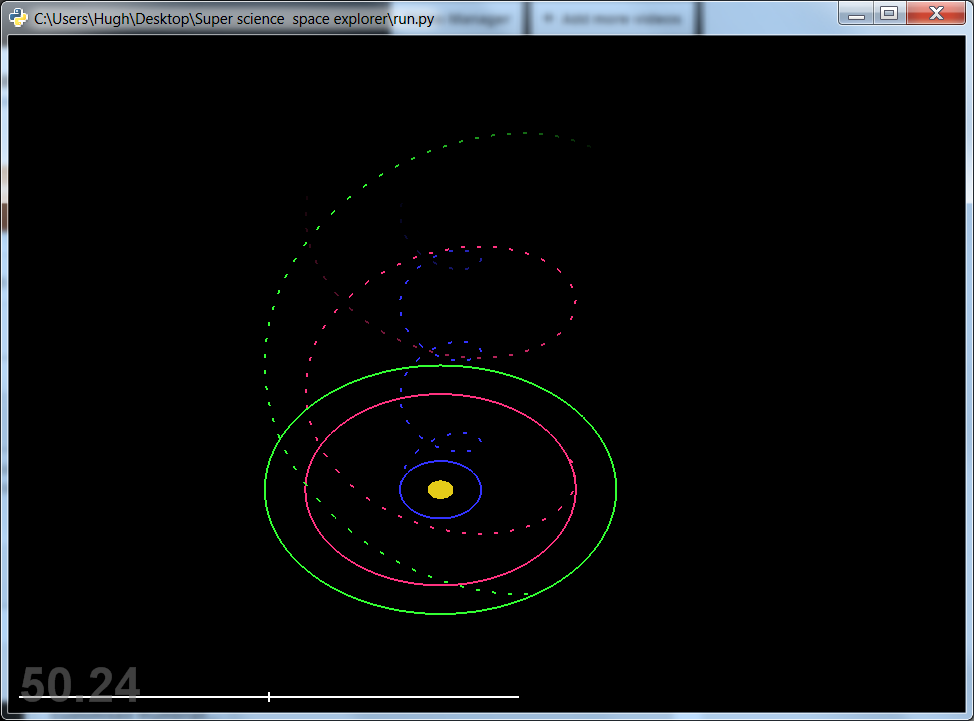 Finally decided late last night to start again from scratch as my first attempt wasn't working out quite how i wanted, anyway, I have a little spaceship so far that can propell itself around space. Next comes the things to do and things to kill you