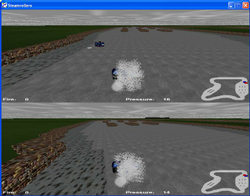 We have a working 2 player split screen mode. And joystick support.

A Pyweek 2 entry by Salt and Vinegar (erik, Jay)

Just a bunch of random people from Edmonton who thought it'd be neat to give it a go. Erik and I have done previous LD48's and a 72HGDC and are bringing on board a tonne of our friends to help. Teachers, singers, coders, artists, and more!


1% of respondents wished to disqualify the entry.
Respondents: 21

Time zones and such.

I figure other people might find this useful. Plus, by posting it here I'm sure someone will tell me if I am somehow confused by the start time.

With the announcement made of the theme our minds clicked into high gear. Ideas spewed forth like wood chips from a saw. And like wood chips they were mostly fit for hamster litter. We dispaired. And then it came to us, our light, our plan, our vision if you will.

Picture if you will, an alternative universe. One where technology stopped shortly after the advent of the steam engine. Even stagnant, advances were made and industry spread. Dark times fell upon the land like a plague of dark things and cruel men ruled the world. Bound in servitude there was but one choice for freedom. One choice for glory. It was (insert yet undecided name here)!

In (insert yet undecided name here), you pit your skills as a driver against others like you. Your ride is your life. A precision amalgamation of gears, boilers, and valves. It is a three tonne pressurized bomb that you guide through precision turns while avoiding pitfalls and traps, both natural and set by your opponents. Only one will win, and they shall win it all. Will it be you?

Ok, anyways, so this is how it went. We decided to do a steampunk racing game and came to that conclusion based on several reasons. First, we've never done 3d in python before. Sketchy. But it could be fun and we'll learn a tonne as we go. Second, it seemed like a project that lent itself to a greater degree of participation from our entire group. Third, it's a genre we're all familiar with and it should add a level of familiarity which will bode well for both us and those playing it when we're done.

We had a powwow with most of our members and managed to get ideas and enthusiasm flowing. Now comes the hard part, making it work and come together. We've got some concept art sketches done of tracks, vehicles, and such as well as the beginning framework for the actual engine. Starting to look exciting and everything is going along smoothly. If I feel ambitious later I'll put up some photos of the concept art. For now, we're going strong but about to pass out.

Here's the snapshot of our work thus far:
http://media.pyweek.org/dl/2/SnV/pyweek2-day2.zip

I got the map and design up and going pretty much how we want it to be. Erik got controls more or less figured out and solid. I blended our efforts and Erik smoothed the wrinkles. Harry is going strong with our AI, and it's looking good. Several of our artists called in to give us updates, but no solid assets yet. I did most of the art in the demo, so it can't look worse when they're done. They have talent and sadly I don't. The first set of pieces have fallen into place quite nicely. I'm hoping they continue this smooth when we bring in all the extra assets and AI.

The team is starting to produce some art. Check out our logo.

Here's the snapshot of our work thus far:
http://media.pyweek.org/dl/2/SnV/pyweek2-day2.zip

Today at work I fought with python, but couldn't get it to work right (stupid intel macs), so I wrote up the credit roll module blind and tested it when I got home. Also today I worked to get a bunch of our specific hard coded hacks out of the way and slightly cleaned up everything. Also put some more work into the map code. We have a start line, so we can count laps whenever my brain starts working again. Erik also cleaned up a bunch of code and started on the HUD design. He also took some time to yell at me for my horridly designed map config file when him and Scott tried to make a few new maps.

Our artists have been getting things in motion. You can see two samples of their work here and here. Hopefully I can post some music samples tomorrow night. Should be good!

I have an issue. It's a sound issue. I can't find a way to play mp3 or ogg files directly through pygame mixer. I've had people suggest pymedia, but that's a no go for us because it doesn't have macintosh support. As our sound guy uses a mac exclusively, it'd kinda suck for him not to be able to enjoy the fruits of his labour. So I ask your help and I seek suggestions.

What can I do? The big thing is size. A 1.6 MB mp3 vs an 11 MB wav is a huge difference. I can't seem for the life of me to find any 'pure' python mp3 or ogg decoders. They all seem to rely on some external recompiled binary. So what can I do? How do you all deal with these restrictions?

Check out our intro theme here.

Here's the snapshot of our work thus far, not on this server due to size:
http://www.wardtek.ca/pyweek/pyweek2-day3.zip

Alright. Not much actual hard coding done today, but a lot of progress. I put in the basic state switching needed to make it go from an engine into a game. Played around with sound and graphics and other pretty baubles. Some things still don't work quite right, but that's a battle for another day. Erik and I spent about 2 hours trying to squish Drew's 11 meg wav file of our intro music into something manageable before TenjouUtena pointed out that yes, we are retarded and pygame does ogg by default. There was much rejoicing.

Under the hood I migrated yet more variables out of hard coding (damn we put in a lot of those) and made a configuration file for graphics settings and the like. Erik has been poking around with our actual steam mechanics and got the basics set up, though they don't actually affect the physics yet. Harry informed us that after being up until 2 am last night we have the groundwork for AI. A dumb AI, but that'll come with time. Cory, our big giant head, informed us that he's worked out several algorithms for the collision detection we'll be using. Drew sent in his first music sample and promised more on the way. Someone called looking for Scott, but we didn't know where he was either. Kate oooed and ahhhed. All in all, a good day.

Well, today didn't seem overly productive but I guess it didn't go too bad. Erik perfected py2exe. I perfected py2app. So we now have a system to distribute our code out to people without python and it seems to go alright. A lot of people who've been helping us with assets were able to see the game for the first time and fell in love, so hopefully more motivational for them.

Code wise, I got basic gameplay down. Laps are now timed and you finish a race after 3 laps, though that currently doesn't show anywhere but the command line. Erik's been cleaning up and ripping out and redoing a bunch of our physics to be more better than before. Double plus better! I put in a simple particle effect engine. It's much better now that it doesn't leak cows.

It just hit us today that there's really only 3 days left and it suddenly doesn't seem like enough time to get everything done. Should motivate us to work faster, but we'll see how it goes.

Today we took a small chunk out of our to do list and actually have a playable game. If we had to hand in this build, it'd still be fun to play. Of course we're missing things like opponents and the like that'd make it more fun, but we have a nice time trial mode set up to practice on the tracks. And a much better handled menuing system.

Visually, we had Steve come over and he went through our big list o' textures and also grabbed some creative commons ones and redo one of the tracks with better defaults. It's much more dark and destopian now which is what we're going for. I also put in some of Don's car renderings in so it changes when you turn. It's starting to look more and more like what we first envisioned.

That said, it's very hard to keep from being burned out at the moment. Temptation is strong to just chat on IRC or read reddit, but we must continue on. There's just so much we wanted to do with it and we're constantly saying 'scrap it' and 'not a priority' more and more.

So tired... Anyways, here's a run down on what we got in short bulleted form:
1) Collision detection & response
2) Minimap to track movement on the HUD
3) Persistent scores
4) Updated Graphics
5) Easier map configuration files
6) Many small tweaks...

List seems short for the 13 hours I put in today... ah well. The game itself feels so much better now. I was going to put up a snapshot, but really, I'd rather just sleep. I've even got the zip somewhere... ah well. You can all see the final product tomorrow anyways.

Well we're waiting for out entry to maybe be uploaded, I put it on my website. You can download it from http://www.wardtek.ca/steamrollers.zip

Hope to have an exe and a mac .app built soon.


Due to efforts to cram in last minute features, our uploaded competition entry has several know bugs:

These are all one or two line fixes, so we will probably do a "not for judging" bugfix release some time soon.

Some bug fixes and graphics improvements. No new gameplay though.