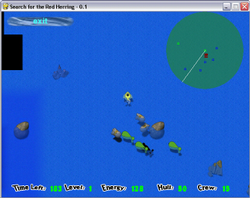 Three people who like making games with python, and the ugly duckling :P

I am wodering if I can use my PygLibs library? I posted it on Pygame but wanted to make sure that it isnt considered illegal in this competition.

Are we allowed to change our vote by resubmitting it? :)

After working a few hours last nightand a few this morning we have made a little progress(both froward and back)
the fopward prgress is that we already have a player that will move around a map, an enemy who blinks and some weird neutral things :P
The backward is that our radar system, which only worked from a fixed point last night, has now failed us completely:(.

Hopefully I will have a screenshot up later today.

Well, currently we have a player that you rotate with the arrow keys and move with the up arrow. The only problem is that the movement is kind of funny along the edges of tiles and the screen does'nt follow you correctly.
I think we'll just go flat 2d instead of isometric from here on out.
SinCe its so much easier to move objects with that.

I wrote a script that will easily and quickly convert a number of smaller images into one big sprite sheet.
It will also keep transparency, if you have it, intact.

If you are interested email me at
roebros@gmail.com
Currently there is no license but it will be in the public domain, after I work on it some more and make it prettier.

... I have two completed spritesheets available if you want to take a peek. ;) Just take a looking at our entry listing.

I also did a nice looking menu/splashscreen, but you don't get to see it until it's 100% complete.

I think this is shaping up to be a decent looking game! I just hope I'll have enough time to finish everything we need.

The only thing that seems to have worked well in this time is the art. We now have a large amount of it finished.

I started yesterday trying to get collision detection working. 10 hours later and it still didnt work.
Today I spent another 3 hours on it before I had a new idea. I converted all player movements to use the A* algorithm so that the player would dodge the rocks and not worry about collision detection. That failed to work too.
For some reason the player still moved through the rocks and a whole host of bugs appeared, and the game speed dropped to about 1 frame a second.
After ditching that idea I finally got the collision detection working a few minutes a go, after spending approximatly 15 hours on it. :/
Now its back to getting the rest of the game working.

Hopefully we'll have enough time to come back from that major set-back.

We took a backward stride yesterday/today to make a giant leap forward.
After several bugs with the game appeared we stripped every thing down and re-coded from the ground up.
Now we have made the first forward progress in 2-3 days, yay!

The game is now highly playable but not very balanced nor complete. But we have at the least a game to show for our work.

We are currently testing the game, if you would test and let me know what you think I d appreciate it greatly.

email is roebros@gmail.com
Or I'll be on irc

To every one who helped finish our game, especially:
Rabidpoobear - for the needle on the sonar
Richard - for all of the loose ends he provided suggestions/answers for
And for everyone else who helped us with play-testing and/or help.

Our sound effects were primarily from http://www.grsites.com/
And the great in-game music was from http://creativecommons.org/audio/


As this was our first real attempt at pyweek(I was in the last one but with another team and I didnt do much) or any other compo, I am greatly pleased with how well the game turned out.

It will be fun playing the rest of the games now that it is all over.

It seems with the dead-line we had a few things missing.
I thought I would put them all together here.

I had some miss-communication with our level designer so all of the levels above 3 will result either in instant failure or instant win :/.
email me at roebros@gmail.com if you would like the fixed levels.

The game is missing some documentation in the help pages that tell you how to reconfigure the keys and/or set fullscreen mode....
You can configure any of the keys in the game in the config file, you can alo set fullscreen to true if you want it.
Two rules!(this is partly what messed the levels up :( )
You must have a space or line break between every word,
the ':' is considered part of the description of each key and must be placed next to any identifier, ie(full = full: - for fullscreen)
So to set fullscreen mode you would have

full: true
instead of
full: false

Sorry these werent fixed in the game.

You can also edit any of levels that are there to anything you want,
Adding levels takes more work though ;)
Simply follow the rules specified for the config file above and use the first level as the reference point,
not the level you wish to edit!

Just for the record...


What exactly should we vote a game if we cant play it, e.g.(there is an error in the game)?.

I know in the past people have just not voted those, or they have voted all 0's.

Should I do one of these, or is there something else I should do.

For the benefit of the world, I've released all of the art assets for The Search for the Red Herring under the GPL!

So go forth, brave programmers, and create games that look like The Search for the Red Herring! :)
I'd be interested to see where these images end up.

Also, feel free to debate here about the validity of releasing art under the GPL! :)

If its not too much more to ask...

Could there be a page that keeps track of everyone who entered, instead of just everyone who submitted an entry? Because there are a lot of questions in them that I think would be nice to keep.

Could there be a search function for finding diary entries/comments? It's very annoying IMO to go through each diary entry untill you find what youre looking for.

And finally, on the main page(pyweek.org/3) the website only holds a certain number of diary entries - the newest - on the page itself.
So, if you want to find an older entry you have to through each teams pages untill you find it.
Could you instead have a 'next page' button at the bottom of the diary listing.
That way it will keep all of the entries easily accessible

Sorry if these are too much, but they'd make the webiste look/feel a lot nicer IMO.

Gotta run. But I'll be back later if you have any need of clarification,etc. As I have found I often make typos or say something oddly, if I dont pay attention or am rushed ;)

We havent had a lot of time to work on the game following pyweek,
but I have put about 6 or 7 hours into it.

So here is our "if we only had one more day" release.
It fixes many of the problems pointed out here.

You can now see which weapon is selected, game-play is faster and less choppy(you dont even need psyco to be able to run ;)), and it should use less cpu, among others, for a more complete list look at the changelog file that comes with the game.

The changelog also contains some *possible additions that we were planning, but most of the have been chopped.

We are hoping to wrap the game up very soon, so we can start working on a sequel that will integrate even more of the things people asked for and some of the things e wanted to do that would be too much work the way the code is now.

Any and all comments are welcome, but all but the most simple will likely wait for the sequel.

The game is now hosted by sourceforge and the link is,
https://sourceforge.net/projects/sftrh/