Moving around with bombs

A Pyweek 26 entry by The Larry And Dan Show (mauve, larry)

It's fall, and that means it's blasting season!

The beavers here in Dynamite Valley Park have been working overtime, making dams! If I've told you once, Ranger Jim, I've told you a thousand times-- now get out there and blast those consarned dams!

Guide Ranger Jim around a series of levels infested with beaver dams damming up the waters of Dynamite Valley Park.

Requires Python 3.6 or newer, current Pyglet, and current PyGame.  If you've got those, just unzip and run

Check the README.md for detailed gameplay instructions and everything else.

Oops, forgot one thing: Remote-control bombs are triggered with the T key.  Those are the bombs with the red ring near the fuse.  They're only on a couple of levels!

p.s. we recommend the tutorial!

The petrified forest
Presented by gizmo_thunder

I was away at a family gathering most of yesterday, so I only got to work pretty late. Larry had started on the coding, and I started some quick player graphics.

Tonight feels like starting in earnest for me. The rough split at the moment is that I'm doing graphics and Larry is doing gameplay. Today I've added tilemap rendering for the level, as well as a scenegraph for game objects and a particle system that indicates the water flow. Larry has worked on our tile-based movement.

This animation shows off pretty much where we are:

We make a lot of progress today; both the visual style and the game mechanics are coming along.

I drew some explosions using Inkscape. Animation is one of those things that is hard in Inkscape, but I've become practiced at anyway, so I think this looks Ok:

Larry has been hard at work on the flow mechanics as well as being able to interact with objects already in the world:

While I think we can create puzzles using these mechanics, the details aren't completely worked out. I started sketching some notes on this on paper. But we have a text-based level format that will allow us to iterate quickly, and we have 4 days to iterate on the puzzles, so that seems like enough time. 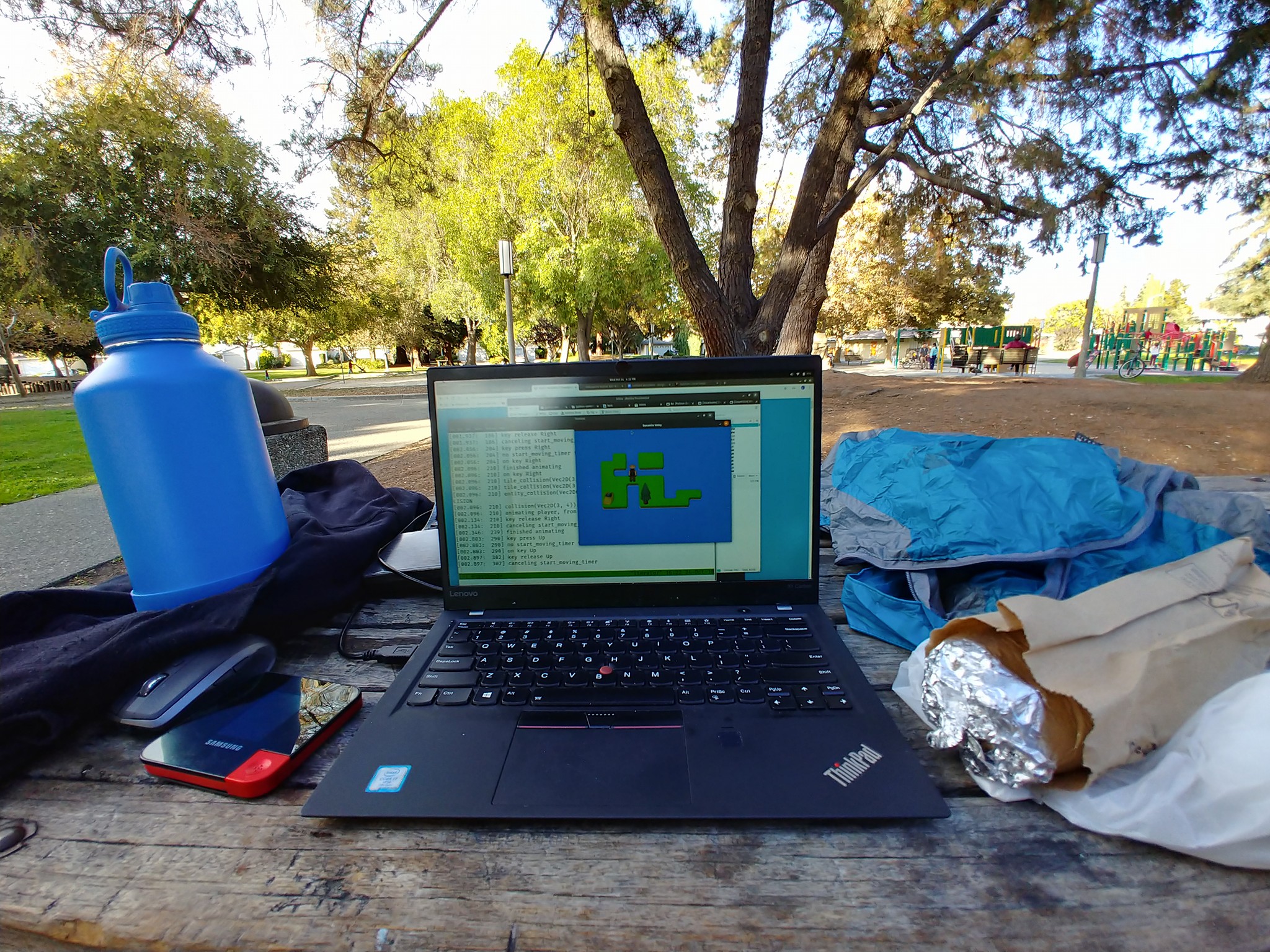 Since our game is nature-themed, I took advantage of our lovely clement weather--I took my laptop (and a burrito) out to the park!  Ah, the birds chirping, the perfect background for game development. :D

Look at all this technology showcased in this GIF!  (And please excuse the occasional screen tearing--it's a side-effect of the screen capture program I used.)

Pardner, them there's what we call game mechanics.

Aargh, game breaking bugs introduced at the last minute! As is customary I've uploaded a 1.0.1 with bugfixes for game-breaking issues only. I've played end-to-end now and the game is completeable.

I've not done many diary entries over the latter part of the week, despite posting a few screenshots. I was posting animations and then realised that this might include spoilers so I slowed down ;-)

As always it was a race to the finish line, and the level design was mainly left until last. We have a great engine, but only 11(?) full levels. I think there are some real challenges in there, though, so hopefully it's a good amount of content. If you can decode the level text-file format you can try creating your own levels.

I'm very happy with the game, on the whole. It is cute and colourful and challenging and satisfying. I hope you enjoy it!

The Player's Guide To Dynamite Valley

We've rewritten the README.md for Dynamite Valley.  I've pasted it in below in the hope that PyWeek participants will see it and have a better time playing Dynamite Valley as a result.

The Player's Guide To Dynamite Valley

It's fall, and that means it's blasting season!

The beavers here in Dynamite Valley Park have been working overtime, making dams! If I've told you once, Ranger Jim, I've told you a thousand times--we need you to blast those consarned dams!

Guide Ranger Jim around a series of levels infested with beaver dams damming up the waters of Dynamite Valley Park.

"Dynamite Valley" is an exciting action game written by Daniel Pope and Larry Hastings for the "PyWeek 26" programming competition in October 2018. This guide will explain to you everything you need to know to play Dynamite Valley.

We sincerely hope you have fun playing! Now get out there and wipe out those dams!

You play as Ranger Jim, a park ranger at Dynamite Valley Park. Your job: remove the dams infesting the park's beautiful waterways! With explosives!

Every level has a number of "dams" floating in the water. Ranger Jim has to destroy all the dams to advance to the next level. If you complete all the levels, you win!

Both Dan and I played through the final version of the game, version 1.0.2. Every level is winnable! We guarantee it!

Also, the first zip file release of "Dynamite Valley" had a game-breaking bug. We guarantee that version *isn't* winnable! 1.0.1 had a minor bug that could be worked around. 1.0.2 and anything newer should work great!

Check the requirements.txt for what you'll need.

You might be able to install all Dynamite Valley's requirements automatically by running this:

Your mileage may vary!

We recommend running Dynamite Valley with "python3 -O". Pyglet's Open GL support occasionally, if rarely, throws assertion failures. If you use the provided launcher `run_game.py` we do this for you.

Once you start the game, at any time during the title sequence you can press one of three keys to start your game:

Space - Play the game starting at the last level you played.

Every time you start playing a level, the game remembers that, and if you exit the game and restart, pressing Space will take you straight to that level. (It won't remember where you were, though--it'll just reload the level from scratch.)

In the game, you control Ranger Jim, a park ranger working in "Dynamite Valley".

Up Down Left Right - move Ranger Jim, or change which direction he is facing

E - interact with the object Ranger Jim is facing, like take a bomb from a dispenser, or pick up an inert bomb from the ground

B - drop a bomb, onto the spot where Ranger Jim is facing

Ranger Jim can pick up up to two bombs at a time. When he drops a bomb, he drops the bottom bomb from the stack. That's always the most recent bomb he picked up.

There are four types of bombs in the game:

There are a lot of decorative objects that are immune to blasting and freezing: trees, rocks, and--strangely enough--beavers and bullrushes. However, you can destroy bushes by blasting them.

If Ranger Jim gets blasted or frozen, the level is over and you have to restart.

Flowing water will push objects along, like floating logs or bombs dropped into water. Objects in flowing water move at the rate of one screen tile per second.

Objects in flowing water that get pushed up against something get stuck. (Unless the object is a Contact Bomb--in which case, it explodes!) Once the obstacle is removed the object will resume floating along.

Ranger Jim can step on most floating objects. There are only a few he can't, like beavers and bullrushes. If Ranger Jim steps on a floating object that's in flowing water, he can ride on top!

If Ranger Jim falls in the water, the level is over and you have to restart. But don't worry, Ranger Jim won't walk into water--he stops at the shore automatically.

Objects can occasionally move very quickly. This is called being "flung".

Making Your Own Levels

You can make your own Dynamite Valley levels!

First, open up the "src/levels" directory. Dynamite Valley levels are individual text files in this directory. The easiest way to make a new level is to copy an existing level, then edit it however you like. Edit the level in your favorite text editor, then save your new text file in "src/levels" with the ".txt" file extension. You can play your own levels with "run_game.py <name of level>". For example, if you name your level "fred.txt", you can play it with "run_game.py fred".

Here's a quick description of the level format. Levels are text files, using simple ASCII files. Each level text file has three sections: the "tile map", followed by the "legend", and finally the "metadata".

The first section is the "tile map" for the level. This must be exactly be 12 characters across and 13 characters tall. The "tile map" is a sort of ASCII art drawing of the level, where one character maps to one tile on the screen.

The "legend" establishes what the characters of the tile map represent. A "legend" line is a single character, followed by a space, followed by a definition of what that character represents in the "tile map". There's also a default "legend.txt" shared by all levels containing all the most commonly-used tiles.

(What are the possible legal "definitions" for a legend line? It's hard to describe. Just find a tile in the game that does what you want, and look in the level where it was used to se what the relevant "legend line" was.)

After the "legend" there should be one or more blank lines, followed by the "metadata".

The "metadata" establishes various other facts about the level. The format of a "metadata" line is: a noun with a colon at either end, followed by one or more spaces, followed by the value for that metadata.

Here are all the valid nouns for metadata lines:

The only required metadata is "next". All the others are optional and have sensible default values.

Stuff We Didn't Get To

Some ideas we didn't have time to explore during PyWeek 26: