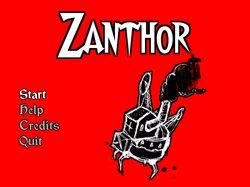 We'll be posting our progress on this site, but if you are interested in seeing our planning, etc as we go along, you can also check out our website at

this team is the same as philhassey from pyweek 1 + illume + maybe a friend of illume's.

lookin' forward to the contest! if anyone has some last minute bug fixes they need in pgu, e-mail me and i'll get out another bugfix release before pyweek begins.

this might just be a dumb question, but my team is thinking it might be fun to make a pygame game that connects to a central server for some multi-player aspects.

would it be okay if the server app was php/mysql? all competitors would be able to play the game using only python, since nobody would have to install the server app. (although it would be available if someone wanted to see how it worked, etc...)

the olde battleaxe has its pyweek website (wiki) up and running at http://www.imitationpickles.org/pyweek2/

there isn't really anything to check out, so i'm not sure why i'm mentioning it. maybe just so as to publicly invite anyone who wants to deface it. have at :)

richard, is there a place i can add this link to a description of my team or something? not super important, but it might be convenient.

for anyone who has been using pgu, this bug fix release addresses numerous minor bugs. it also includes some minor enhancements to make the system slightly more user-friendly. Please see examples/gui14.py and examples/gui15.py to see the cleanup and updates in action.

I'll be available in #pyweek for the next two weeks as well as during the contest to answer any questions, provide help. Please check out this latest release, if any final bugs are found I can wrap those up before the contest as well.

some concept ideas we have had.

Here's some sketches we've made for game concepts. Still no code done yet.

some more sketches by aka

We're using some place holder art, and starting on basic game play. What it shows here is the basic layout of the interface. with the three status boxes on the right, and the iso view in the middle. It also shows the start of a pick up coal dialog when the robot goes over some coal. There's a bunch of bugs with it at the moment.

if anyone is trying to use pgu.isovid and are having troubles, please get ahold of me, and i'll send you a patched version. we're using it for our entry, and there are a few odd-ball bugs that could make it hard to use! Hope that helps!

We've mangled all of our ideas for gameplay into something that all of us think will be really fun. We just need to decide if playing as the human, and as the steam powered castle would be fun or too complicated. Here is a screen shot of the game with the placeholder art.

And here are the game play ideas...

You play as a human, and as a walking/flying castle.

You play as a weapons inspector, and inforcer searching for, and destroying nukes weapon factories before they are finished.

there are coal mining trucks sent out by the city to collect coal.

You can stop the coal trucks to slow the factory down from completing construction.

You need to pick up coal, and water.

You can push around rubble.

The human does not use resources to move. This solves the problem that the castle can run out of coal and the player then loses.

You use water, and coal to power parts of your castle. Moving uses up steam, so does firing cannons. The heavier your castle the more steam it needs to run.

You can pick up pieces of junk and add them onto your castle. Like engines, armour, cannons.

Cannon towers that shoot you will be placed on the map.

what rewards will the player get elements in the game...

lots of steam for all

i had lots of fun creating this steam particle effect for our game.

and now with crazy explosions


Can also shoot baddies, and shoot the walls.


I've started putting in more game play stuff. Now all of the unit types use the same base class. So they all use steam, and need coal & water to make steam.

We did a few speed optimizations to hopefully get it running at 30FPS even with lots of baddies, and particle effects on screen.

Aka has done some new graphics. But he's not finished yet, still a bunch to go.

We also still have a lot of game play elements to finish. As well as to do the interface, menu screen, credits screen, etc etc.

We need to start putting in some sounds and music. Tim has made one song which sounds really cool! But it's not included yet.

I spent tonight cutting out the interface, getting ready to put it in to the game once it has been completed. I still have a bunch to do on the interface. I need to hook up the stat indicators on the left. I need to make the save/load/news/quit buttons work. The text message box needs to work too. But I think I'll sleep for soon.

It has been interesting working with other people on the other side of the earth. You go to sleep and wake up to find all sorts of goodies done.

As well as people on the other side of the earth I am working with someone in the same city. So we have had a few days together working on stuff, which was interesting.

I also got a game over state, and a next level state happening. So you can lose, and win this game now.

Bla bla bla. Too I drank too much coffee yesterday. Time to sleep now. Here is another screenshot.

did you use PGU?

Hey, I'm interested in some feedback on how PGU served you (or didn't!) in this competition.

Congrats on playing! Thanks Phil, Aaron, and Time. Special thanks Richard! Thanks Zanthor!

Congratulations to everyone who played in pyweek2.

Congratulations to Phil, Tim, and Aaron who were all great fun to play with over the pyweek2.

I got some sleep with five hours left. I was just going to 'rest my eyes for 30 minutes'. HAHAHAHA. Luckily Tim and Phil finished it off, and managed to be awake to upload our final entry.

Our timeline was setup so that we would get a playable game done in the first two days. Which we kind of did in a way. You could walk around picking up coal. At one stage we had coal trucks, factories, and robots in the game. Then they were replaced with peasants. Then the game took a little bit of a change.

The last couple of days were spent madly trying to get things finished. We ended up simplifying things in order to get it finished. Which is the way of things I guess. The game fits into the time you get.

pekuja, philhassey, and treeform got together on irc this evening and cranked out this whacky game about bouncing watermelons on a trampoline in about 4 hours. enjoy!

add your game to pygame.org

hey -- please add your entry to pygame.org! i will likely set up the "spotlight" to rotate between the top few entries, so add 'em so i can link to them.