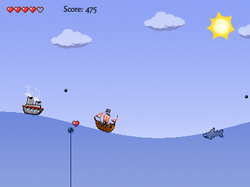 Screenshot of the final version

Trip on the Funny Boat

The game is side scrolling arcade shooter game on a steamboat equipped with a cannon and the ability to jump. The player will need to take advantage of waves to defeat the enemies and dodge hazards.
The team members are Pekuja (code,graphics,sound), Hectigo (code,graphics) and JDruid (music).
The team can possibly be found on the #pyweek IRC channel with their respective nicks.
The game's website can be found at http://funnyboat.sourceforge.net/

I had a lot of trouble coming up with an idea that I liked. Everything I came up with was either too boring, too complex, or something that has been done before. That's not to say that my current idea hasn't been done before, as it is an old school side scroller, but I hope I can make it different enough from other games that it's still interesting. The idea here is basically that you're operating a steamboat on the wide open ocean, trying to avoid any hazards and fighting some enemies. The mockup I made is pretty flat, so I might go with something like in games like Double Dragon or Battletoads (which actually had the toads operating some water scooters), so I can have some more interesting maps. In the mockup I made there's not much yet, but there's the player's steamboat and an enemy sailing ship. Other possible enemies would be mines, birds, and perhaps a dieseld powered boss battleship. Some abilities that I've been thinking for the ship are jumping, diving and charging (demolish sailing boats by crashing into them). I'm probably not giving it guns, because that's boring. More on the game as I progress. Currently is mostly just an idea, which might be bad because it's already the second day, but it's not too complex, so I'm sure I can manage it. :-)

My game seems to be about killing sharks now. There is now basically a stream of sharks that come at you and you have to shoot them. I will add some more enemies, such as the sailboat I had in the mockup screenshot. Currently I'm trying to fix the code so that the waves aren't such a kludge that they are now. I will probably try to make the waves a core thing to the gameplay mechanic, so that you'll have to take advantage of the height differences to reign victorious.

Team effort for the win

I was planning on making this project all by myself, but now it looks like I have some helping hands now after showing the so-called game to a few friends. JDruid made me an awesome song to use with the game, and Hectigo tweaked some of the code and graphics so the game is looking better than ever! Hectigo was interested in redoing some of the graphics too, so hopefully the game will look awesome when it's done.
The next things I'll probably be adding are scoring and naval mines. Probably some more enemies. Also, I'll probably start making some audio samples and adding them into the game as well as the music.

The game is progressing nicely. I've now added some particle effects. Namely the steamboat's horns emit steam, the sharks bleed when they die, and the newly added mines explode when you touch them. It's looking more like an actual game every minute. I'll have to add some scoring to the game soon to make it more interesting to play. There is also music in the background now, which you can't see in the screenshot of course, and there are a couple of sound effects for shooting and for the mines exploding. I'm still yet to use the sailing ship sprite I made in the first batch of graphics, but I'll probably add it in the nearby future. Some other things I think the game needs is some background graphics, like passing by islands, and perhaps harmless fish swimming underwater. Another thing I might add during the week is levels. The game doesn't actually have levels, but instead has a steady stream of sharks and mines that come at you. It actually works pretty well like that, so I might capitalise on that for the level designs.

My game has pirate ships now. Also seagulls, scoring, and ornamental clouds. All in all, it's progressing nicely. I've also added more sound effects, gamepad support, and the code is getting cleaned up as I go and expanding the game requires it.
I think soon I will need to add a main menu of some sort and probably a high score table. After that, I could actually call it a game, although it is of course possible to restart it every time and write your highscores down on some paper. :-)

Trip on the Funny Boat

The game is finally finished and PyWeek is over. I didn't get around to posting much screenshots near the end of the week, but we managed to do some very nice additions to the game.
The graphics are largely redone, the game has a main menu, high scores, and two different game modes: "Story mode" and "Endless mode" with separate high scores for both. Endless mode is actually closer to what the earlier version were. It's basically more and more enemies coming at you, but now with different "phases" that have different balance between the different kinds of enemies and also different "weather conditions" meaning that the waves get taller or shorter.
Story mode actually has an end unlike the Endless mode (hence the name "endless"). You'll go through five phases similar to the ones in endless mode, this time with progressive difficulty, and in the sixth phase you'll face the final boss.
We had a great time making this game, and we hope you have equally good time playing it!

This is a bit weird, but I was interviewed by a podcast show called LaGER - GNU/Linux and Games/Entertainment Radio. I happened to suggest to them that they should talk a bit about PyWeek on the show, so they decided to invite me to talk about it since I happened to be around on their IRC channel when they started recording. ;-) We talk a bit about PyWeek and I tell them about my entry, etc. You can check the podcast's website, or you can just download the latest episode here: OGG version or MP3 version.

It seems like Trip on the Funny Boat won the team category of PyWeek 2! However, I would also like to congratulate Alex on his victory in the individual category, and also for receiving the highest overall ratings in the whole competition!
I would like to thank everybody who rated us, my teammates JDruid and Hectigo and also all our friends who tested the game during the week. It was a really fun week of working on the game and a very fun two weeks of playing the fantastic games you all produced.
We are going to continue working on Trip on the Funny Boat and we welcome any and all suggestions and feedback. You can reach us via e-mail "pekuja at iki dot fi" or you can catch us on IRC with our respective nicks.
It is 5 o'clock in the morning in Finland now, so I probably need to get some sleep. See you all at PyWeek 3! ;-)