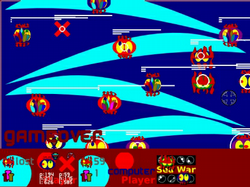 A Pyweek 6 entry by milker

This is a 2D real-time strategy game! It lets two player play on one machine.


23% respondents marked the game as not working.
1% of respondents wished to disqualify the entry.
Respondents: 13

I will write the new game.

This is the robot icon, maybe it can help someone.

This is another robot icon, it is four octopus.

This is the green robot icon.

This is four Bubble Boom.

I will write a new game in this week.

I am sorry! because I was don't follow the rule before.

Today Morning, My computer wasn't power.!!!
Everything was stoped.
##>

This is Focus Dot, it use for user handler, I like the handler is Joystick and many keys to handle user input.

I create two Focus Dot, I use it to handle user input.

This is the people icon, that show player how many robot is alive.

Just a Mark, Mark it and go away.

there are my two sons, who are playing Sea War.

Or see the source code. heeee!!!

Sea War is running in One User Mode, now!!

I want write a configure tool for my game.

But I haven't more time for it.

I think: I need to choice: Are you have any idea?

In 2008 easter, I wanted to write someting. that can help my sons to learn.

I have two gamepad and I am a linux user too.

So, I started to learn write a game. It is name Racing Killer. it is a shooting game.

My two sons love it more. they play it everyday.

I was decide to post it to internet. I found pyweek

pyweek#6 is my first challenge about computer skill.

I join it and post Racing Killer in there.

But it was broke the rule( because the game isn't write this week.), so I write a new game, it name SeaWar.

Sea War is a 2D real-time strategy game. It isn't like C&C , it just design for children about 4+ ( fours year old. ), so the game logic is very simple.

Another thing, Sea War is design for multi-player, they can play in same time and using one LCD monitor. they are taking up them joysticks and play it, they are talking and laughing.

I don't know howto active a two mouse in linux, so Sea War use joystick to play, and my son love joystick than keybroad and mouse.

In many year ago. I started learning OO (Object Oriented) in programming skill. when I learned ruby and Java .

OO is difference than Old C style. ( my first computer language is Basic . it was running on a 8089 processor. it had not OO :<

One day my friend told me, he wrote a new java game.

I did same in Sea War.

SeaWar has two part in game screen, Top is the sea, bottom is the player information broad. Robots is working in sea area.

In the every robots ( Octopus and See Nettle ), It has some usefull infomation.

This information area can help user to make a good decide and enjoy control robots.

Many useful information in playarea.


HowTo Play the Game (PlayerControl)
SeaWar is design for 4+ and 2+ children. so all robots don't need control. they should working smooth for themself!!

If the player want to control them, player can move the focus mark in the sea, and do:

If player want to mark someone. (It will keep display marked robot's information in mark area).  player can use mark, when robot marked, it will display mark sign in its face. Of course player can release the mark.


Mission
When Player complete destruction another side's robot soldier. He will win the game.

Thank john, who give me idea to support keyboard.

Many game use arrow key to handle robot or car, like running or jumping.

It is easy to handle for more people, but not for my sons.
because my keyboard is Happy Hacking Keyboard.
If my son need to press 'K_UP', he need to press [Fn] + [[]
So, the joystick control is good enough for them. If you don't have any idea to control your robot. Pleas support Joystick ( Thank you !!)

it can run. but very ugly (has bugs).

P.S. I had compete debug about Keyboard support.
But now the code is ugly.
If I have time, I will clear it later


SeaWar is depend:
Thank john, who give me idea to support keyboard.

She support me to join pyweek#6.

Can I change the final screenshot ?

Please help me.
I want to change the final screenshot to

Who can help me ?

I cann't success to test all game in my linux box.
my machine running debian 4.0 and python 2.4

Thank john talk me that.

=== You are supposed to make the game itself, including the lib after the compo started.===

I am sorry. SeaWar was use some old lib, that the lib was create before the compo.

If any people don't like that. I just say sorry. and tell richard to cancel my entry. please.

This is my first times to play in pyweek ! Just say sorry. :(

Can I modify some game and post the link in here ?

I love some game. that was created in pyweek#6. Can I modify it ??
And Post the link in here ??

Thank You for your respondents

I think: the game's logic isn't easy understand. and the game need two player and two joystick, maybe isn't good for you.
But I enjoy it.

Thank you for your respondent.
P.S. I will care the diff type joystick setting in next game. ^^
and keep it easy control from us keybroad.
Thank you for report it cann't running in XP.
I just test it in my linux ( debian ) .

I am sorry,I want to ask another question:

Why they can? why the cannot??

You will like it.
Now: it require a dancing-pad.

:) it will support keybroad, later.

Thank you for your care and play.