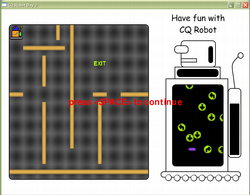 The maze the robot has to escape and on the right are the movement smybols you have to collect to guide the robot.

A arcade puzzler where a robot needs to find a way out of a maze. The players tasks is to fill the robots command queue by collecting falling command balls in a minigame.


33% respondents marked the game as not working.
Respondents: 18

Question to the rules: Design Documents

I wonder how many details in a pre-created design document are allowed to use it during the one week development phase?

The thing is, that there will be 5 theme possibilities and i wanted use the week before the development phase to write a small design document (some organized notes and sketches) for every theme, so i have something when it comes to programming.

Do the rules allow, that for an extreme example i use the extra time in the week before programming to search for some free backgroundmusic, sounds and textures so i haved more time for programming. Or use my sketches as placeholders in the game (so maybe they will be in the final version). Or is it the best thing to use the design notes only as a guideline and do all the research and resource creation in the programming week?

For me as a single developer this is an interesting question and i think that maybe the strict way (don't use design sketches in the game) is safer but what is your opinion?

It was obvious to me, that the robot theme was one of the most preferred but considering my 5 design ideas it was my number 4....

First Place: Jig - Arcade puzzle game where a bouncing ball has to pass a maze consisting of movable parts.

Second Place: Mashed - Worms like game with simple mash physics where you fire different types of mashed potatoes into a landscape to remove obstacles or fill holes to clear the way for Pete the potatoe bug.

Third Place: Formation - Realtime strategy game where you control a swarm queen that can send units to gather resources, build and upgrade units and defeat enemies.

Fourth Place: Robot - Tower Defense style game where waves of scrap are transported by a conveyor belt and the player can build different types of stationary industry robots to handle the scrap.

Fifth Place: Shuffle - Control a robot which consists of several segments (movement,body,head) which can be changed at platforms (movement=chains,wheels,spider legs,...). Each segment has pros and cons and are needed to guide the robot through different types of terrain and obstacles.

I'm not that satisfied with my robot and shuffle idea, so i tried to come up with something new..... And TADA!!! a shower in the morning can be very inspirational :)

Hold on for my next diary entry for my final robot theme design.

I decided to make a game half part "robot needs to find the maze's exit" and half part "collect falling command balls".

So far so good. Today i'm going to finish the ball collecting part and begin with the maze stuff. Maybe there will be a screenshot with great programmer's art :)

Productivity, where are you?

Yesterday was a successful day, not for my pyweek ambitions but for my wife's computer.

After some crashes he yesterday raised the white flag and the bluescreens took over. So armed with nothing more than an installation cd and several tools (up2date antivir&...) i restored peace and a nice clean system was the result of my efforts. By the way, there was no time left for pyweek.

But today was a good day :) I implemented a level editor, painted new tiles and implemented a buttons class and several screens. So there are two days left that i have for sound and new features.

Hi folks,
When i played my game on another computer i realised, that the quick hack i made to run the game at 30 fps may does not work on other computers as well. So i changed it. So if the games running slow (you can indicate this, when the time counter in the upper left decreases the seconds too slow), then please use my fix.

For this replace the function start_game_loop() in lib/main.py with the following code fragment:

Please give me Feedback :)

Greetings,
Please use this entry as an opportunity to give me some feedback on my game. Do you like it or not and why is it so. Maybe you see some stuff that could be better.

For example, i thought, that the concept of the two queues is a little bit irritating and instead i could only use one queue, where the collected balls stay on the right side until you collect a finish ball and then they are appended to the end of the robots execution queue.

Or more special balls, that enlarge or shrink the collecting pad, or do some other stuff.

This was my second pyweek and so far it went better than i thought. In the last competition i commited a program that nearly had no graphics and wasn't that playable.

This time i put in some graphics that are nice (for my talent) a d also made a thing that can be called a game. I finished 6 levels, each playable and the great thing is, that it is fun to play the game.

Yeah, it's not that easy with the fun. At thursday i played my game and thought... Damn, it looks better than the last time, but the gameplay is boring. So i changed the way then collected balls where handled and it turned out, that i made the right decision.

On the other hand, in the last hours i replayed the whole thing and found several things to improve: The levels are not well balanced (level 4+6 are easier than i want them to be), i had no real help screen but explained the gameplay with hint screens and for the most i located a performance problem with some computers.

The good thing is, that i managed to fix all these things. The bad is, that i didn't made it in time (had no time to build the md5)... So i will post v2 tomorrow and you can play the director's cut :)

I look forward to the end of the judging phase and meanwhile i enjoy your great contributions (many of you produced some really nice stuff!)

btw: The game still has no sound... This is a thing that i will spend more time on during the next pyweek.

I created a help screen for those who have problems with my entry. This screen will also be part of CQ Robot version 2 i'll release. I created a new version of my game CQ Robot. This version includes the following new features (thx to claxo):
- A help screen!
- Levels are better ballanced than in my rushed final version :)
- Changed the level file line endings to unix, hoping that it will help the unix (linux/mac) guys to play my game. There were several errors with the pickle module that i used to store my level data.
- The performance fix that i also entered in the wiki.
- Switch fullscreen mode on/of.
- The ball probabilities are now nearly equal over time.

Thanks for a great pyweek

Hi there,
PyWeek is over and it was better than the last one. Although i am a bit disappointed that my last entry did better than this time (which i wouldn't expected) i'm overall pleased. It was fun working out a design concept, writing the code and i even had time for gfx. Next time there will be also sound :)

Playing the other entries i often wondered, what good games were created in just one week.

So i hope, you had also as much fun as i had and that we meet again at the next PyWeek. I look forward to it!