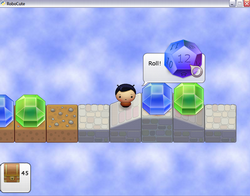 
53% respondents marked the game as not working.
0% of respondents wished to disqualify the entry.
Respondents: 13

Prepare To Be Claimed!!!

That's right, not just pawned or owned but CLAIMED!!! :) I'm sorry, but I would suspect it is to be expected to talk a little trash during this competition. Visit the Functory to see what I'm doing for a warmup.

Here's a new warm up. I decided to translate an old favorite from JavaScript & DHTML to Python & Pyglet. It's called Pyggles! (Hey, I only learned Python two weeks ago, okay?)

After four hours of trying to make my own tiles I gave in and used Danc's. In the process I may have bit off more than I can chew since now it's looking like RPG or something! It sure tastes good though! Once I get the engine going good I'll add some Robots and hopefully my own tiles. --> RoboCute Blog (p.s. you guys are making me jealous! wait till next PyWeek!)

RoboCute: An RPG Board Game

An RPG board game is the only thing I can think of that can be finished in time! Actually, I'm coming up with a lot of Robot theme oriented ideas for it. More details on the RoboCute Blog

Today marks the day I can start working on the game instead of the game engine all the time. Yipee!!!

I'm able to move the little dude around with the keyboard finally. I'll upload a sneak peak of the source code sometime today. And of course ... more details at the Blog!

I got Speach Bubbles working! At this pace, the finished entry will probably only consist of rolling dice, moving and picking up gems and treasure. I can live with that for a week of work though!

You Only Thought They Were Human!

Oops! The title was supposed to be 'I Heart PyWeek!'

Unfortunately, I think this project is DNF. I'm bogged down in Bubble code with only limited Python and OpenGL experience. I'll hang around to provide words of discouragement, err, encouragement though!

A Long Night Ahead

I'm down but I'm not out! If I can wrap up event processing there's still a chance of having something that resembles a game. Even if it is shoehorned. :)

This is killing me! It hurts so bad, yet it feels so good!

The AI if you want to call it that is going well. It's going to be a super simple board game. My 3 year old nephew will get a big kick out of it!

I was also thinking this would be a good way to teach preschoolers how to count and read. Counting because you roll the dice and then the avatar counts as it moves forward on the board. Pretty cool.

I've finished the basic mechanics, although there is no game end state.

This is going to be down to the wire folks!

Here's the final screenshot. Too bad the final code I uploaded uses a debug level. DOH!

I feel like I have a hangover AND like I got hit by a truck. I guess it's a good thing PyWeek only comes every six months. :)

There are so many talented entries it may take that long to choose the winner!!!

Well, I implemented block culling which was a big improvement. I need to make an Easter Bunny that distributes treasure. :)

Here's the link to RoboCute's Google Code Page. I've got the SVN going. I'll upload a zip to it after I get that Bunny and a couple of other things finished.

RoboCute offers you his protection. :)

Heh, I finally did a robot sprite in InkScape.

I don't seriously expect to win, but I can still have some fun! BTW, I'm going to start judging you guys so be nice to me! :)