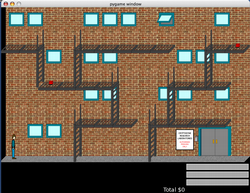 The year is 2042, and everything is in the hands of private enterprise -- including espionage. As a skilled employee of InfoSneak Inc., it is your job to ferret out the secrets of targeted enterprises and governments for sale to the highest bidder.

I'm gobsmacked. This is about the least likely theme I would have expected to win.

I had great ideas for some of the other themes, which sadly must be assigned to the bin. Now I'll have to spend precious coding time coming up with another idea. Not an auspicious start to the week...

Well, after the initial shock, I managed to come up with an idea fairly quickly, but I've been too busy coding to talk about it. I've just got to the point of having something vaguely playable, so I've made a submission. It's marked final just in case I don't get around to making another one, but I hope to expand on it a bit before the deadline.

Result of brainstorming session. Obviously only a few of these will get done in the time remaining...

* Safety rails on the fire escapes

* Doors in side walls

* Mixed colour beams, use shield combo to get past them

* Guards that chase you when alarm sounds, use white shield to evade them

* Make objects sit on the benches instead of the floor

* Upload terminals to cash in on the info you've found

* Levels larger than a screen

* Reveal parts of level as explored instead of all at once

Implemented doors in side walls. Trickier than expected. Up to about the 4th version of the rendering algorithm now -- it's surprisingly hard to render everything in the right order in this kind of game.

Will try to do stairs next, maybe as a kind of sloping ladder. Then probably spend Saturday creating some more artwork and another level or two.

Added a whole new level with all-new artwork! Still no stair climbing animation. Hope to do a bit more polishing in the morning and make one more submission before the deadline.

BTW, I just noticed that I seem to have accidentally uploaded a .tar file instead of a .tar.gz file. If it causes anyone any problems, let me know and I'll upload again.

Made objects sit on tables wherever appropriate - looks much better.

I tried to implement acceleration as suggested by Richard, but it was proving tricky to get right, so it's disabled for now.

Added some mixed-colour beams to the lab level, and generally beefed up the difficulty a bit. The guards demand much higher bribes now, and you get sent back to the start of the level after a successful bribe, so it's not so easy to get through a whole game just on bribery. :-)

Also added a Z command to turn all cloaks off, which seems to help considerably.

First of all, I'd like to thank everyone for the nice ratings they gave me. This was my first attempt at entering a PyWeek, and I wasn't expecting to rank so highly!

Second, I'm really sorry that it seems to have had speed problems on so many people's machines. It wasn't straining my development system (a not-particularly-recent dual 1GHz PPC) so it never occurred to me that average present-day machines wouldn't cope with it. Seems I was wrong, or maybe a substantial percentage of pygamers are using older hardware.

I didn't learn about the convert-alpha trick until after the deadline, or I would probably have used it. I'll definitely use it next time (yes, like Voldemort, I intend to come back...) Also probably set myself a limit of maybe 10% cpu on my system, to allow plenty of headroom.

Also I fully agree that the controls could do with some work, although I can imagine it would have been hugely worse if you were having framerate problems at the same time. I did try to implement Richard's acceleration suggestion about 2 hours before the deadline, but I had problems with it and decided to spend the time on what seemed like more important things, such as another level. I'll see what I can do about it in a post-comp update.

Responses to some individual comments:

That's probably because there isn't one. :-) Another thing that I didn't have time for. You just have to decide when you've found all the info and stop playing.

I'm open to suggestions on what the ending should be. Maybe making your way up to the roof where you get whisked away by an (unmarked, of course) InfoSneak Inc. helicopter?

> Some music would't be wrong..

True, but my composing skills are even worse than my artistic ones, so I'd need to find some that was freely stealable... again, I'm open to suggestions.

> The level often becomes unsolvable after returing from capture.

Quite likely, yes. That part needs some more thought. Maybe add some extra batteries when returning or something.

> If someone handn't told me about the open window I never would've got into the building.

Yes, that was perhaps a bit obscure. I was thinking of having a message you could find that gave you a hint, but again, not enough time.

> after being caught, that char always walks left automatically

Hadn't noticed that one -- must be forgetting to reset the current action or something.

> I couldn't figure out how to get past the receptionist without bribing the guard though.

There's a clue to that in the instructions...

Well, I did say *kind* of PoP-like. Swordfights wouldn't really fit into the theme. :-) Maybe hand-to-hand combat with spies from rival organisations...?

> The multicolor lasers also don't seem to work perfectly - I had all my cloak batteries on, but still got caught on some of them.

Your cloaks have to be set to exactly the same colour as the beam in order to get past it. Otherwise it would be too easy -- just turn on all cloaks regardless of the beam colour. (The lasers are more discerning than human vision in this respect. Probably should mention that in the help.)

Thanks once again,
Greg

For the next PyWeek, how about adding a "ratings detail" link alongside each row of the ratings table?

Not only would this make it easier to get there without going through the entry's main page, which you've probably seen enough of already, but the visited/unvisited status of this link in one's browser would help keep track of which rating comments you've read which you haven't.

While incorporating the convert_alpha patch, I discovered to my embarrassment that a bug in my event loop was causing it to try to render flat out, instead of just once per frame. It seems likely that this was the source of at least some of the speed problems people have had.

I've just posted an update (version 0.5) that fixes this along with the convert_alpha. I'd be interested for anyone who was having trouble to try this version and tell me whether it works any better for them.

I've also added an option (-s) to specify the frame rate. The default is 20, but if you still have speed problems, or you find the controls too sensitive, you could try reducing it. (I'll try to find a better solution to the control problem later).

There are some other options, too -- see the README for details.

If anyone would like to help me turn Sneak into a full game by creating some levels for it, let me know and I'll write some documentation for the level editor (which has a rather obscure user interface at the moment).