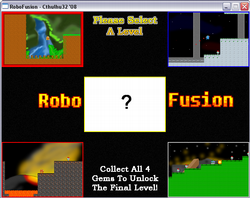 A Pyweek 6 entry by Cthulhu32

Four robots must combine their powers and become the mega-robot-fusion man to stop the evil squid monster! Or something like that? Their specialty is the Robot Climber, the Anti-Gravity robot, the Fastest Robot Runner, and the Firepower robot. Each level they play is designed for the specific robot, and they are all trying to collect an ending gem or something at the end of their level through a boss? No idea if I'll have time to finish this, but should be an interesting journey! :D

So the description of my project describes it, RoboFusion will be a game with some game elements from multiple games I've played that I've really enjoyed.

Climbing robot is sort of a Ninja Gaiden awesomeness, might give that character a sword or something?

The anti-gravity idea comes from Metal Storm and Kid Dracula. There was also a GBC game that uses the same mechanic, but its such a cool idea!

The runner is sort of an older idea, but instead of having a constant forward accel, the runner will act more like N+ where you start slower and speed up really fast. I guess Super Metroid could be a good comparison.

Finally, the fire-power robot will just shoot a stupid amount of crap at the enemies. Maybe a laser beam or some kinda cool crap. Some particle effects or something? Who knows.

So tonight the goal is to make a level editor (I think Idle said to do that first :D ) Get some basics down, make some base classes, possibly get some art together, we shall shee.

Just a few more tweaks and it will be 100%, but I'm calling it done for now! Essentially I worked a little backwards from last time I tried this, I took Saluk's suggestion and created the level editor first before I make the game engine. The level currently consists of 3 layers, base (collision tiles), enemy layer, and event layer. Very similar to Phil's system, should work great for what I need it to do.

Heh, I guess the word "robot" gets everyone pretty amped up for Megaman style games including me :D I've just noticed that something like 6 entries are platformers! Which don't get me wrong is awesome! I thought Barbie Seahorse Adventure was brilliant.

I have more progress on my game, got some more tiles going, trying to get the GUI fully done before I actually finish the game, this way I'm not struggling last minute to add in the health, lives, etc. The level editor has been a pretty awesome tool as well!

Tonight I should be able to whip out some pretty decent gameplay elements as the wife has a work thing till 9pm, and I have nothing going on for about 4 hours tonight :D

Alright, so I thought 4 robots in one game would be too much for me, but it turns out I'm actually doing a lot better than I thought I would be. I have a climb, gravity, speed, and regular robot. No projectiles coming from the robots and the player yet, but that will be happening very soon. I also have the GUI almost fully working (all the icons are in place.) Tomorrow should be some real gameplay, then some art, sound effects (courtesy of sfxr :D ), then some polishing and tweaking, then Saturday I shouldn't be cramming. Woooot.

Okay, so the gameplay is not really there, but I got all the physics in, projectiles now correctly respond to enemies, the firepower guy has homing rockets!! and you can go back and forth between in-game and the menu.

Try out the alpha (no gameplay really yet) Download Me

A note on the various types of gameplay: Climber level when you latch onto the vines, use up and down to move up and down. You can go infinitely in either direction, and error out, so just pretend this works :)
For the anti-gravity level, press and hold up and press jump, or vice versa, and you will flip gravity! You can only flip once per landing.
For the running stage, not a whole lot to this one yet.
Firepower stage you can shoot homing rockets! Blow up the robots with ctrl, theres a bug thats making the enemies not actually "go away" so the missiles will target ghosts. I will resolve this soon..

Holy crap, I'm done!! Wife is excited that I'm done with everything, as am I! Game seemed to be actually pretty entertaining, I didn't finish the music in-time, and I changed ctrl and space keys to z and x.

Thanks again for a great pyweek! Post-mortem after the rankings are in!

Dang, I thought I caught all the capitalization mistakes before I finished, but it turns out I missed the level files. So there are three options if you're running on Linux or Mac, first you can change all of the level files to capital L, Level1.txt, Level2.txt, etc. in the data folder.

Or download the play.py here with the updated file name play.py

Or you can change the following snippet of code starting from line 22:

My apologies for that one, I'm getting rusty on differences with Python between Windows and Linux.

Thanks again Pekuja for catching that one.

So it seems like some of the biggest comments I've been getting about my game is that its way way too difficult. I'm definitely understanding of that, and I made the game in the spirit of the Megaman style games, where each level took half an hour to even get to the damn boss! :)

Because I can understand some of the levels can be frustrating (oh god anti-gravity), I put videos of me beating each level streaming off of my other website.

Also, they are pretty choppy because hypercam 2 is kinda crappy, but its the best I've got for now :)