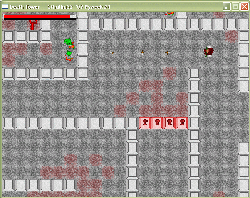 Wow, its really looking like a game! Probably last screen until final.

A Pyweek 4 entry by Cthulhu32

You are a mighty warrior in need of scaling the death tower. Each floor contains traps, monsters, and items which will all lead you to the top of... DEATH TOWER. Bosses, level ups, stores, money, random item droppage, the lot, this game will hopefully be a decent contender in pyweek #4.

Original Plan: Well I originally figured that I could come up with a Gauntlet/RPG style game, where you level up, pick up items from monsters, gain levels, all that good stuff. So essentially you start at the first level of the tower, then as you advance you gain levels, and you can go back down levels. This way you could like fight bosses, gain cool objects, all that good stuff.

What I accomplished: Well, after tackling the tile engine, the world scrolling, object-oriented monsters and items, collisions between tiles, keys, weapons, etc. I realized that the 7 days were up. Working on everything by myself was extremely time-consuming, the art, the music (made it myself with DrPetter's Musagi :) :) ), the code, everything.. So what I wound up with by Friday at midnight was pretty much a gauntlet clone. I had a ghetto level-editor going, a long list of to-dos, and a game that was near impossible to beat. Saturday I woke up late, had about 6 hours to catch up so I came up with a few bug fixes, a few other things, and came up with a final 20 minutes before the contest was over.

What went well : Well I honestly learned about 50 times more than my Urban Ninja game, and I really added some object oriented goodness into this thing. I made a level editor, I coded up some pixel collision tile detection, I made things work!

What went wrong : I definitely wanted a lot more with this game. I was trying to get A LOT done in a short time span with a lot of stuff in between. I had classes from 8-5 every day, I had a fiancee I was visiting on Friday till Sunday, it was a nutty week. So with just gameplay going for me, I came up with something, not quite what i wanted though.

What I want for next time : Well I'm definitely going to try to join a team, without the art and music I think I could have gotten a lot more done. I heard some people suggest Phil's PGU engine, a very good engine. With his new additions for 2-d platformers its going to be amazing. I really wanted to learn all this on my own though, tile engines, world scrolling, level editors, etc. I just think if I can find a good artist, someone who can come up with sounds and music, I'll definitely be able to work on NOTHING but code! Woo!

Anyways, thank you again Richard for putting on such an awesome contest, I am excited for the next one, if anyone wants to join me on a team feel free to leave comments or find me on irc :D

Ok, its 2:53 AM my time thursday night/friday morning and I am going to be heading to Seattle tomorrow. My fiancé is going to be working on her Master's portfolio, so I get a few hours to kill to try and get this thing beyond where it is. If I don't finish Friday night, I will wake up saturday morning, and sadly do another last day scramble to get everything done. At least its playable this time, and I have learned WAYYYY more this time around.

I uploaded the last version of Death Tower (0.04) before I start releasing final versions, this is mainly because the size of the ogg's, and that I will be adding more songs and graphics. Feel free to play with the game so far, it is not really really playable but it works great, and you can't really die.

I also uploaded a Level Editor because Pekuja made enough :-( at me to release it. Its really really ghetto, and the code is super sloppy, and you MUST put it in the same directory as run_game.py or it will not load any of the images. Use the arrow keys to change layer/tile, and use the mouse to place tiles. Left mouse adds, right mouse deletes from that layer. It does not load any maps yet, that will hopefully come tomorrow. So for now all you get a level creator, if you mess up, you can always just edit the .txt manually. I apologize if it does not work on linux systems because of folder names, like I said its ghetto and not included in my game for a reason.

I will also release a final level editor with level loading as well just because thats essential for me to modify old levels and add new items/monsters/things.

Nearing the end, so close but so far

Wow, is it THURSDAY already?!? Crap, where has the time gone.

Well my game does not look much different than the old screenshot, but damn does it do a lot more. Last night I implemented the following:

I spent a LONG time tracking down a few bugs that were my fault in the collisions which lost me about an hour of hard work last night. But things are looking more promising than last pyweek, my game feels a lot more solid and playable than my old one, and I am more confident that I'll be able to get it somewhat running how I'd like. Plus my object oriented design is sooooo much better, I know use a very nice scheme of Main loads Game class, calls Game.Run(), Game loads a scene class, scene displays whats in the scene, and goes back to Game when it returns, this way you can go in and out of a game without leaving the Game Class.

I also uploaded the songs I have so far in .ogg format. DrPetter's Musagi is a really sweet tool, i HIGHLY suggest it to anyone wanting some old school touches to their game.
Download Songs Here

Well tonight was really successful in my book

First important goal of the night: I got player-tile detection going just perfectly! I think I am going to simplify it a bit because I am doing a way I have not seen before and is probably not the most efficient. In fact, now looking back I can think of at least one way to speed it up a little!

Next goal, I got scrolling pretty much down on the character. I have one tiny bug in not being able to go beyond 32px of extra scroll space, but that bug will be squashed soon, not on my highest priority.

Next thing was that I got the lizard guys working. I made all the sprites and made a really easy little dummy AI that does nothing but pick a direction and either idle or move. The monsters are really close to the player, and they know the max of the level based on the size the tile engine gives me.

FUTURE GOALS haha i guess that didn't need to be bold. I am going to be working on monster-player collision, monster-monster collision, then get some weapons going so there will be actual gameplay. I know the big note to pyweek'ers from Richard is get gameplay first, then work on everything else. Well I am kinda overkilling the gameplay, but it will be coming soon! After I get that, I can start adding levels, change the palette for the lizard guys, add maybe 2 or 3 more enemies, add in items & possible puzzles, start to work on minor RPG elements, touch up the menu, get some music/sound, so much to do so little time. I am excited and tired. Goodnight everyone!

Damn I am working 100 times quicker than pyweek 3, I have a tile engine going, scrolling tiles, a moving character in 8-ways, I hit the ground running this time around.

I have uploaded Death Tower v0.01, which has the intro, menu, and now a preliminary in-game feel of how it will play.

I also updated the screen to show what its like, I will work on tile-player collisions tomorrow. After that, I have a few things I can work on, I think I am going to add enemies and player-enemy collisions to make it playable so I will have a playable game demo going.

PS: holy crap the other entries are looking great, I am really excited to play some of these games! Dr Conrad B Hart, jebus could your 3d look any better damn.

Wooo my first prelim shot is getting me stoked about making this game!

Basically it does nothing right now, but soon I will have a tile engine that loads a level based on some kind of .txt or .lvl or something. And it will NOT be confined to a 640x480 space, the level will scroll when you are approaching corners and what not. That way the levels can be huuuge, I will probably make the level size dynamic so some levels can be small little stores, and other levels can be freakin huge mazes! Damn this is going to be a lot in a week, but I'm excited!

I have finally decided on what kind of game I am going to put together. I am definitely set on a gauntlet style action/rpg where you have to acquire new things to become stronger. So you start out with your fists, and you have to battle really weak monsters to get a dagger. This also means you have an inventory, so you can press start and go to your inventory and setup your character appropriately. Thus the RPG style, plus you will have experience points and level up to become stronger. Leveling up will also mean distributing points, so you can become faster, stronger, smarter, or luckier. Some floors will also contain items needed or desired for moving ahead, so you will be able to backtrack, but monsters will respawn when you do. Also, you will run into floors of friendlys that will sell you things like weapons, items, spells (maybe?)

For my working version, all this game will be is a guy running around hacking up enemies. As the game progresses, it will turn from pure Action to Action/RPG. Plus I have to make a lot of sprites so that will hinder it somewhat in a week. Music will also come in handy, as I recently was told about DrPetter's Musagi program which ROCKS.

I am stoked, I have been brain storming so good exercises to get my pygame back in the grove, I think if I just make something simple and small just to get me back into it I'll be ready for the week of pydoom!