September 2008 challenge: “The length of a piece of string”

Dominoes String - I am back!

Well, we kind of promised an improved version of Heartfelt Nightsong. At first we thought that our one week's vacation this October would be perfect for some hacking. Not so. Then we, well, mostly just me, thought that Christmas would be better. Doubly not so. We need the time for the game me and jakbob are making as an examination project for school. It's gonna be in Python (yay!) so we might keep you updated for it once it starts to become playable. Anywho, for the same reason, there probably won't be a Heartfelt Nightsong 2 for the Pyggy awards either. If any of you were hoping to see it finished in the near future, I'm sorry to disappoint you.

Maybe there will be a release this spring...

All future updates for this project will be entered in the Threads Of Fate pyggy awards project page.

I'm still managing to get some time coding up improvements to the game. Since my last post I've: Code is now at r259. I'll probably release a new version of the game once I've sorted out a bug in the Line Of Sight code.

The user interface code is all currently in a single module and implements a Cocos Layer. It's entirely independent of the rest of my game code, and I'm hoping it becomes respectable enough to include in Cocos itself.

Since the comp officially finished I've been working on the game some more. Stuff I've already done, mostly addressing the feedback from the judges (thanks guys!): More to come!

Rarely do I get the motivation to continue working on a speedgame after the contest is over. And so RegEx Express is a bit of an anomaly for me, in that I'm still working on it.

However, I'm not working on it in Python -- I've ported the Curses emulation library to ActionScript, and have started porting over RegEx Express into the world of browser-based games.

When working on RegEx Express, I created the UI class structure in such a way that it could apply to any game, in any language. I've been tentatively calling this structure HUGS (Han's Universal Game Structure) -- basically, I'm trying to distill my experience with speed-gaming down to a collection of "best practices" that will help solve the perennial wheel-inventing that goes on with trying to create a UI structure, managing a game clock, how do you switch screens, do cut scenes, etc etc etc. I've been planning this for a while, and the first successful use of HUGS was on RegEx Express. Afterwards, I used it on my Pyday entry (though took advantage of precious little of its capabilities), and now I've got a working HUGS implementation in Actionscript as well.

So because I made a fairly straight-shootin' port of the Curses library, and I've got a HUGS game structure in both languages, it's a fairly copy-paste-port of the game. It's honestly not much more than copying the code, changing a few constants ("self" to "this"), and syntax changes (semicolons, curly braces, etc).

I'll definitely keep y'all posted with the progress in this front -- my goal is to port the game to Flash and get it up on some online edu-tainment portals, and perhaps even get it fun-enough to go on a place like Kongregate.

Thanks for reading, and I really genuinely appreciate everyone's voting feedback. We're working hard to implement many of those changes in the new version, and I hope that many of you will be willing to test and give feedback for future Flash versions.

So long, A love story - 'Solo Solo': Thanks and iPhone version

Hey,
Thank you very much for your feedback!
This was my first solo entry and I enjoyed pretty much.

This is the formula that I used for the game:


Hey, I'm porting the game to iPhone using cocos2d for iphone and chipmunk. The game is 60% done.
Game status: here 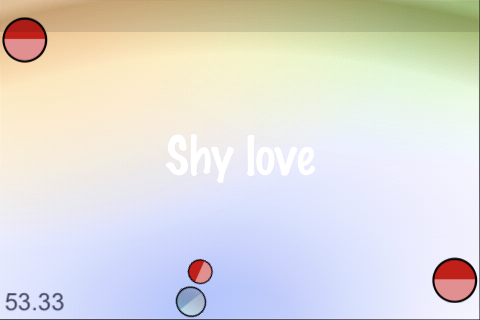 Would you like to beta test it ? Please send me you device id so I can send you a copy.

See you in the next Pyweek!


I liked to be in pyweek7, and, for the so small part of gameplay that got implemented, I feel that I scored high than expected.
Thanks all for playing the game and give feedback, I really apreciate the comments.

@Saluk: it took me a moment to catch your award, but then LOL & LOL, thanks.

On the feedback received:

5 too slow to play: that was a windows - (linux/mac) compatibility problem.
After riq reported this, I got ZeroByte on #pyweek to test a one line workaround. It worked, the fix was added in the entries page and published in the thread http://www.pyweek.org/d/2167/ , also in the in the 'all games, minibugs, minitips' thread .Anyway, my fault, sorry. ( thanks riq , ZeroByte !!!)

dificulty: 1 too easy , 5 ok, 2 too hard , no explicit on this the rest, so probably it feels acceptable for them.
I wonder if the 'too hard' have been mislead by the screen teeling the keys for balance were 'z' and 'x' when really they were 'z' and 'c'. When noticed this I warned in the entries page, in the 'all games, minibugs, minitips' thread and it was mentioned in some thread with no usefull subject. Anyway, sorry.
All in all, seeing the numbers, I think it is in the ballpark.

crashes: 1 lot of crashes, 1 game quits when too much deaths : No clue about this. I will we glad to know more details about this (OS, pygame version, sdl version, traceback if any, does it happen if you disable music in kiko_play.py? )

likeness: 18 over 25 ( left out those with the slow problem) liked what was done. Glad to hear this.

extension: more needs to be done. Yes, I run out of time.
I intend to cleanup a little the code, then extend to near 10-13 levels, with other rope mechanics ( lazoo, launch a hook, mini phys puzzles to solve with the rope, etc) for variety. The first milestone will be 'all diferent mechanics working', leaving the pimping of animations and levels for a second milestone.
I will post here a postcompo version, and anounce at pygame.

Specific bits:
..."should really be unicycling over those tightropes I think!" -> hey, thats cute, and can solve the meter problem. No promises, but I will think about that.

..."When playing the game too much focus is placed on watching the meter, leading to a game of watch the meter." -> yes, I was worried about this. Should try other aproachs to give feedback about equilibrium, and pick the best.

..."The balance thing also felt quite poor when being controlled with a keyboard, it felt as if there wasn't any dynamics to it. Maybe the balance system would be better if it was controlled using the mouse and the balance indicator is integrated into the character instead of as a separate HUD element." -> I liked the pushy feeling of balance with keyboard. At first look mouse + kbd seems complicated, but I will think about that.


Congratulations to all the people that managed to submit an entry, and to the winners, of course !!!

Thanks to all the judges for the kind words, and good suggestions. Sorry to all of the linux users who got segmentation faults. That was unexpected, and I will try to track down why that is happening and fix it up. This was my first Pyweek, and I had a lot of fun working on our entry, and playing all of your awesome games. I'll be back next time!