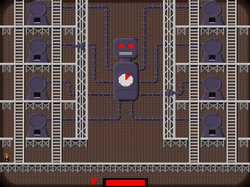 Steam of the Colossus!

A Pyweek 2 entry by richard

I'm the schmo that runs the PyWeek challenge. Mostly I run it so I get to compete in it :) I'm in Melbourne, Australia.

My entry is quite a simple one - I only spent about 25 hours of the actual week programming and doing the graphics for it. I didn't want to stress out by setting the bar really high, and I had fun with just the simple little game. I learnt to use PGU which was good too.

OS X users will need to disable the sounds - see my diary entry on the issue.

Return of the System Capabilities poll!

I've set up the traditional pre-challenge poll on system capabilities to see where people are at in terms of the hardware and software platforms they'll be running.

Me, I recently had a hardware failure, so I bought a whole new machine (parts of the prior one were 5 years old) thus bringing myself into the age of PCI Express, SATA-II and 64-bit CPUs.

You'd have to work hard to make a Python game that ran slow on this hardware :)

Danc over at Lost Garden (you may know him from his Nintendo Innovation Strategy posting) recently posted 250 free hand-drawn textures he created a while back. They're so pretty!

It'd be cool to see them appearing in a game :)

So I had fun opening the sealed themes package this morning... I'm not sure I personally have a favourite yet. I like 'em all :)

Palotai Robin has collated the results from the system survey run over the last month. Thanks!

This could be a useful guide for people looking to use uncommon technologies in their entry.

So I've made some progress. I spent most of today (after starting the comp) doing non-comp things. I got back this evening to start on things and found that my half-baked plans for the "steam" theme really were very poorly-baked indeed.

So I spent the next little while watching episode 4 of Angel series 1. Had a think about my idea. Sketched some bits out. Finally came up with something possibly workable.

This is what I've got so far:

Tomorrow I add a player, and more stuff. Might spend some time making it prettier :)

Can move around the level now

I've put in about 8 hours now. I'm having trouble concentrating - I'm not sure I'll actually have a game by the end of the week. We'll see.

My entry page has a new screenshot and "playable" snapshot of the game as it is now.

With some hints from Phil, I've implemented better player movement controls. They're much smoother and less flakey.

I've also tweaked the visuals a bit, changing the background brickwork to look a bit more like brick, and darkening it a little. The two vertical girders are there to stop the player, and will most likely be replaced.

I've added a download for my progress so far if people are curious.

Next up, the first part of the actual gameplay: destroying the boilers! Mwahahahahaha!

Some animation and start of gameplay

Download the latest if you'd like to try it... got character animation going, with spanner action (hold SHIFT and direction arrow to hit) and run it in fullscreen (-fs) for full graphical glory!

I'm into polish mode now. Stuff like maybe more levels, some sound, maybe some music. Maybe more ways of the Colossus fighting back if I can think of them (had ideas about little robot-helicopters that had finite steam supplies).

Art-wise I need to draw some pipes running from the boilers to the Colossus. There should be other random pipes too. Also, the boilers need better damage states, and the fires need to flicker.

Today I've added graphical polish, a timer to make it more challenging and some win/lose decorations.

I've also cleaned up some of the internal code a little too.

I might look into adding sound before the deadline, we'll see.

Your final submission for this challenge must be in source-code form (accompanied by all data, of course). The judges (your peers) will use this.

If you wish to, you may also upload a py2exe'ed version of the game, but this is not required and if it's giving you grief, just don't do it.

I am considering allowing people to upload py2exe'ed games after the deadline (as long as they're clearly marked as not for judging).

My game and OS X

So my game doesn't run under OS X -- the sound loading bits just kinda sit there doing nothing. Dunno why. If you want to play it on OS X you'll have to comment out the loop that loads the sounds (search for "sounds") and the bits that use the sounds).

Naughty me for not testing on OS X I suppose. Not that I tested it on Windows either :)