Balancer of Circles. WASD to move. Mouse click to shoot. Do not allow circles to grow too big.


5% respondents marked the game as not working.
Respondents: 16

That is weird. And probably a little bit unfair. Cause My tech demo has won game competition. At least in individual category (came second-third in overall).

Anyway, thanks to everyone who played and created they own games. As always, PyWeek was awesome game jam.

Good things:
- Finally I've learned Pygame
- I've decided not to use third party physics engine. And It was really fun to implement my own physics (Yeah – brute force implementation!)
- Decision to draw concept before starting programming worked as always

Bad things:
- Tech demo instead of game
- "Fun" part in scoring is the lowest one. And "Fun" part is most important when You talk about games

P.S. In feadback there were some concerns about my game not being connected with the theme. I think it is because of not enough communication from my side. It is related to mythology. Nemesis is balancer of life (http://en.wikipedia.org/wiki/Nemesis_(mythology)#Rome) and my game is about balancing circles.

Ok. So game is survival game. You need to maintain circles sizes balance as long as possible. If one circle becomes too big and you will not split it in 15s., than it is game over.

Almost no progress. I was experimenting with some ideas. One of them circles that grow big starts shooting at you back. In reality it is stupid, because You do not see most of circles. So, from time to time some ball just start flying into Your side.

Now I am trying to implement new approach to make this tech demo a game. When circle grows big, You should reduce it to normal size (Because you are "balancer"). So, I have implemented tracking of big circles with lines: 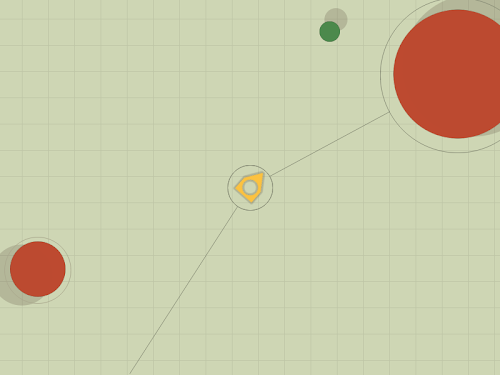 Various params needs some tweaking and some randomness. But basic moves and actions are all done and ready. Now I need to figure out how to extract "game" from this circles' mess.

Yesterday, Site threw up 500 on me. So, I will post yesterday's update today.

What I really need:
- Player interaction with balls
- Figure out how to win/lose (this one will be hard)

Nothing fancy this day:

- Implementation of camera. Moving viewport instead of player.
- Balls bouncing from walls

Concept: I am going to use "Nemesis as goddess" interpretation. Especially this line from wikipedia (http://en.wikipedia.org/wiki/Nemesis_(mythology)):

Name: Balancer of circles
Gameplay: there will be two types circles (red, green). They will it each other Osmos (http://www.hemispheregames.com/osmos/) style. You will control triangle. You will need to collect smaller circles and shoot them into bigger ones by splitting them into smaller ones. Winning/Losing? I do not know – I just want to test and implement this game mechanics. 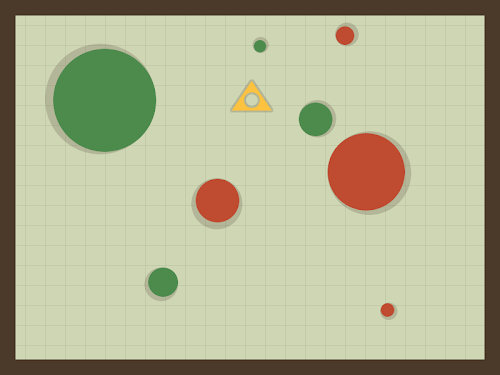 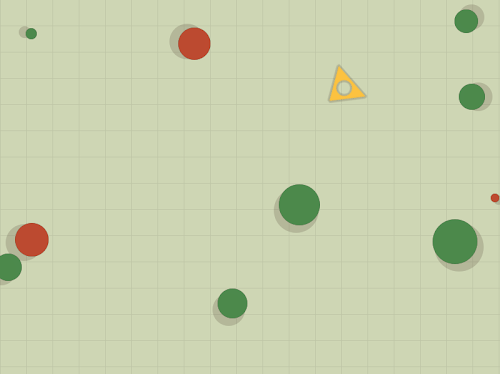 What works:
- Moving around
- Rotating depending on mouse position
- Circles' shadows moves depending on players position

Rant. This time I am trying to make my first pygame game. And it is frustrating. I've already few times caught myself thinking: "Screw this. Let's take pyglet, drop to opengl level and be done with this.".