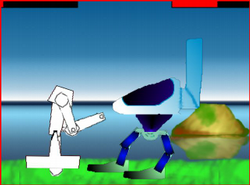 (Forgot to edit this section after coming up with a real game)
This is the short first fight in a game all about fighting iteration after iteration of a mean boss robot that just doesn't know how to die! It may be a little difficult, I balanced it for me. While I can beat it every time, it may take a while for others to acquire this skill.


3% respondents marked the game as not working.
Respondents: 32

Hello fellow competitors, welcome to Century of a Fruitbat's first official diary entry, chronicaling the amazing journey we* all have been on the past few days. Our plans began very modestly, we were going to develop the most awesome robot-themed game ever conceived. As development began, and the beauty of pyglet, talent of our artists**, skills of our programmers*** and quality of our writer's**** storyline, we have gotten a bit more ambitious.

Here is a screenshot of the current progress, most of the coolness has been edited out***** so as not to spoil it for eventual players.

*We meaning me, my usual help has left on a cruise, the stinkler.
**Artist meaning me, I am doing all of the art this time around
***I am also the only programmer
****You guessed it, I am also the writer. And as for a story, there really isn't much to it. Bad guy is bad, kill him. But then you didn't really kill him, so you get to kill him again. And again. And again!!!
*****Actually the coolness has not been added yet, still waiting for it to materialise. Although I guess the fluid arm rotation for attacking is somewhat cool. It should be cool considering all my time has been spent on that.

And Now, for the continuing adventures of Myself

Today I did stuff to my entry. It was a trial in heartache and glory, fraught with danger at every turn, but with some philosophical insight along the way. At the beginning of the day, I had no more hope for my ultimate robot fighting game thingie.

As the day wore on, and I solved many of the glitches in the system, my ambition finally began to return! I saw the light at the end of the tunnel and knew I would make it out. I had to leave my computer for many hours, and used that time to brainstorm new ideas and new directions for the project! Times were good.

Returning home from an exhausting day, I was dismayed to find that the state of euphoria surrounding the most glorious game in progress I had left that morning had evaporated. With little ambition or hope, I set about to solve a few more bugs, but have not regained my former glory. It is dark times my friend.

Fortunately, while evening has set on this day, evening has not yet set on pyweek. There is still time to venture into the depths of my being and regain the courage that must be hiding within. My ultimate plans may yet have to be tempered, however the resulting work still has a chance to be great. The next few days will be a difficult battle.

Remind me next time to NOT base my game on 2d skeletal animation.

Real diary entry coming soon. Maybe. If I feel like it.

Woohoo, after not getting much time to work this whole week, and going down the silly rabbit trail of skeletal animation (which really doesn't have much bearing on gameplay, but does, I admit, look very cool), I was finally able to implement something tangible tonight. It took about 5 hours of hacking on the animation system, coupled with actually designing the boss robot and some animations, and working on the animation editor, to get to this point today instead of tomorrow.

This gives me some time to at least extend the game a little tomorrow, add more boss ai and polish, as well as balancing things as a whole. Unfortunately, I won't even get remotely close to my original scope of the game (what was to be the short introduction level will now be the ENTIRE GAME), but since I'm the only one who really knew what that was, no harm done :)

The battle works, the player bot can punch the boss to make his health go down. The boss cheats and shoots energy balls that you have to jump over. Controls are:

Uhh, now that I am sufficiently burned out of programming for the rest of my life, what with pyweek, and then ludum dare 11 (which i am fairly positive I spent more hours on than I did pyweek) I suppose I may as well see what I can learn from the experience. Those of us in the industry may call this brain dump a "post mortem". I call it blarfing.

I would say that I basically failed pyweek. I'm partially talking about the scores, but I think I would be more upset about the scores if I didn't agree with many of them. I made several large mistakes, and I'm sorry to say, most of them I have made before. I am going to print these out and post them in 100pt font on my wall.

Not to be too hard on myself or anything :) I am just tired of continually making the same mistakes. I think I would find the experience more rewarding and fun if I were less ambitious and not so technology focused.

Now to respond to a few comments!

Finally, I think the final comment I received really sums up my game and how I feel about it very nicely:
"This game has real potential. With different selectable characters using the skelatal system differently you could really pull off an interesting robot battle game here. (I imagine making the skeletal weapons like punching the main tool of damage with powerups like lasers and airstrikes and stuff.) Unfortunately it seems like the engine for this took much of your time and limited what you were able to do. I think what you probably have in your head is awesome."
What I have in my head is quite possibly the most amazing thing that could ever exist. My hope is that in the next pyweek this will be more obvious :)