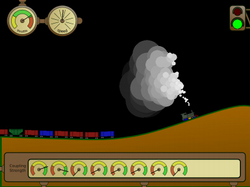 Game didn't quite get done in time. Something still askew in the physics for the trains, which makes it hard to get pas t the point where the cars all link up. Hope you can at least appreciate the effort.


1% of respondents wished to disqualify the entry.
Respondents: 26

So close.. yet so far

In the end, I lost on the most fundamental thing, gameplay. I needed to spend more time tweaking how the trains collided and pulled on each other, in order to prevent what happened: springs between cars would just amp up until monstrous forces would knock them all apart at well over 1000m/s.. d'oh

I did take time off today to tweak the environment and make it pretty, at least I am happy with that. And I did make everything from scratch: music (with garageband), graphics (with inkscape).. except the physics, which was the best and the worst part; I was greatly helped by a co-worker who found the problem interesting.

I hope those who judge will see some good in where I was trying to go.. but admittedly a game is not finished unless it can at least be successfully played.. ah well a lot of fun today though. Hacking under duress is by far the best way :)

And I just added a sweet new hud... but this is because I am procrastinating on the real problem... playable constants. Its still far too easy to break away.. in fact its hard not to break away..

Even if I do manage to make these constants remotely playable by the target time (t-minus 2.5 hours by my watch), I will be a long way from done. Oh well, at least it has a pretty hud now :)

Fleshed out some 'game' stuff

Ok, five hours or so to go, and I finally added some, albeit ugly and barebones, game stuff: help and menus. I abstracted out my game so i can reinit for every new game.

Whats left, gotta make my music play on repeat, preferably without much skipping. I decided to make the terrain scroll, so that will probably be pretty important, and most importantly I really need to tweak gameplay right now. Its really hard to drive a train right now, a little too much throttle and you start derailing/breaking couplings still. This could be ok, but I will need to amp up the feed back so players can really get an intuitive 'feathering of the throttle' feel. And add some sound effects (freesound project is my savior!). Hopefully this will get better in 5 hours.....

Well, only four hours to go, and I am a long way from done. Funny how the week just flew by... oh if only I was a student again! Anyway, I am gonna hack hard and quick for the next four hours to make it moderately playable, I hope, and submit anyway.

With alot of help from an awesome hacker I work with (who has found this train problem fascinating), I have been moving closer to getting the physics right for my trains. Suffice to say it involves springs, masses, dampening coefficients, and static and rolling friction! Hopefully once reasonable constant values are established, I can make the "game" infrastructure around it... scores, title screens, instructions, and some fx.

Uh oh, so apparently 1. train physics are pretty complex (read: cool), and 2. my physics is a bit rusty... time to blow the dust off the olde textbook!

Ok, so I was once reading about the difficulty in modern freight trains of going over a hill, because of the weight of the entire train gets concentrated in the links between the cars, not to mention the inertia etc.

So I decided to make a game where the goal, in exaggerated simulation fake phsyics of course, is to get the train over the hill via a combination of cautious pulling by the locomotive and braking by the caboose... or so i hope.. this could easily be either 1. extremely confusing and difficult to make an intuitive interface too, or 2. just plain dumb. Ah, the fun of arbitrary programming contests!

Check out my screenshot! Also, feel free to listen to my background music, I put an mp3 here. Its very simcityish, I composed it in garageband last night.. not much of a musician, but I think its enjoyable.

Allright, lets get it on!

Excellent, the fun begins. I have just put together some barebones music tracks for my game... light stuff in the realm of simcity type background music. I need to get pygame running on my home linux box here (I just can't get myself to program for a long period of time on my mac mini.. vim just doesn't feel the same.. so sluggish).

I intend to make a very simple little 2d game, where the focus is on a neat idea that, albeit ambitious, I hope I can make intuitive and fun. We will see!

I am really excited about pyweek, can't wait. I decided to flex my game makin' muscles and whip up some stuff yesterday. In the end the basis for a lunar lander type game via steam. Fly it around until steam runs out! Thankfully I have a different idea should steam be the choice.. something a bit more creative and unique (but its good to have had the chance to play with rendering a barebones particle system type steam cloud :)