Well the name dosent fit the game anymore, i am reasonably happy with how the engine for the game ended up, even with all its spaghetti code.

Sorry i forgot a README in the package, to run the game simply run main.py or main.exe if you downloaded the windows package

If you are running the game from source you will need to have pyglet, and if you have an older computer you may need psyco, enjoy

Also, Alison is a dinosaur

Spikes... Why'd it have to be Spikes?
Presented by Lasty


12% respondents marked the game as not working.
Respondents: 22

I was to tired to post this up last night so here it is now.

Development was progressing really well from the start, the theme was announced, i decided upon a game idea and development begun, within about 2 hours i had my fancy tile/material loader working and decided to try doing some lighting

At first this was a simple sounding task, and i had the basics written in around 30 minutes. But it was ungodly light with the ability to shine though walls in the vertical direction somehow, what should have been some dead simple raycasting turned into a 5 hour bug hunt eventually resulting in some nice little demo graphics 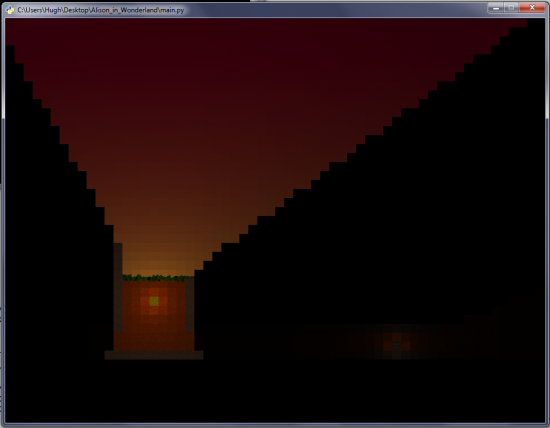 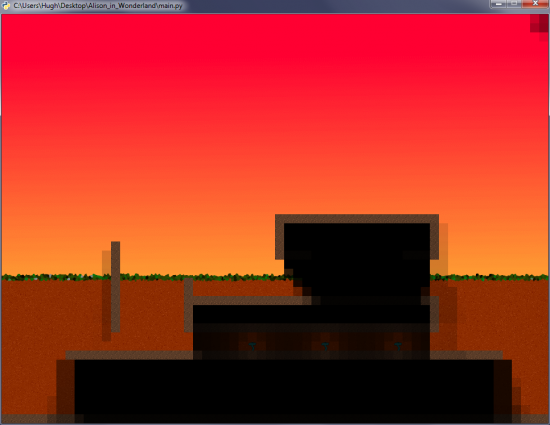 Alison in Wonderland - The horror of programmer art

The horrors of programmer art

Well i have progressed a bit in the game, i have ditched the flying player sprite that i had before for a much smaller walking player, and have got her to run around and jump and not fall though stuff, but she is able to sick to walls and climb, wall jump off them, which you shouldn't be able to. So that is one thing that needs to be fixed.

I have also sped up the rendering of the game now alot, so that i can comfortably run multiple instances of the game at 60fps as opposed to one at 20fps. This has led to the drawback of all blocks being greyscale for now because i don't know how to color a texture while i blit them to much bigger texture so i need to come up with a solution to that.

Last of all i have scrounged up a sprite for an enemy that is able to lurk in the dark, killing you with a single touch, turn on the lights and it will freeze.

Thanks to "th3squirr3l" from the Teraria forums who made the sprite.

Alison in Wonderland - The need for speed

Now that i have a player up and moving i am running into the hurdle of might lighting routine is not fast enough to have a light following the player without a noticeable drop in frame rate, as part of the process of optimizing my algorithm i have found an a really great tool to help visually represent where time is being spent. 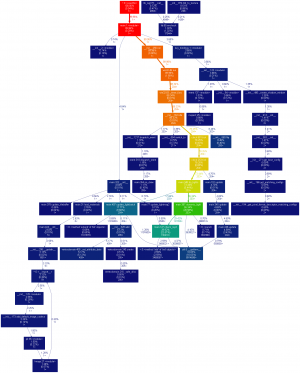 So hopefully i can get that sped up soonish.

Well things are finally back on track, but i still have a boatload of work to do, i still have  few player mutations to think up and code, menus to create, an enemy to create, all the levels to create, and last but not least a new name needs to be though of because my game has change and this name no longer fits.

So overall tomorrow is going to be a busy day.

Afterthought: i should probably get some people to do some play testing for me tomorrow afternoon too, i think we are having guests i can rope into it.

Well the competition is now finished, while i don't think the game i have produced this time is anywhere near as finished or polished as my last entry i think it is a much better game and hopefully more fun to play.

I will probably end up working on all of these at a latter point in time, but until then, enjoy, at the end of judging i will probably have a proper level editor as well as a complete set of rooms.

If people are really struggling to get though my game, i have uploaded a quick playthough of what i had time to put in the game, there are a few more rooms that you might happen to get to though glitches, but all of this has been fixed in post pyweek versions of the game.

Galactic Lego - Where to now?

Although my game ended up in a rather incomplete state, I am still pretty happy with the final result, and thought my final score was fair.

First up to all the people who rated my game thanks for the comments, its always pretty nice to get a ton of positive feedback, that people liked the idea behind my game.

I would really like to redo the game from scratch, and have some neat ideas on features to add as well as a much better and more thought out way to do the code for the game, so if I have time in between uni, a cadet-ship, playing around with electronics and a newly made CNC machine, I really would like to have a nouther crack at it.

I would like to get some more advice from the people here though that played my game on what they think I can do to improve how you move around in the game. This is two space games I have done in a row, and I repeat from last time SPACE IS HARD, the whole frictionless without speed limits thing really doesn't lend itself to easy control and this really isnt made better by the lack of a star field for feedback.

In this game I tried to get around this by capping speed, angular velocity and the distance between opponents but for most people who I showed in person, it was still difficult to grasp, (That said my friends doing engineering were the quickest to master it).

So does anybody have some advice on how I can make ships easier to control without getting rid of designing your ships component by component. If anyone has any other cool ideas they would like to see in a game like this I would like to hear those too.