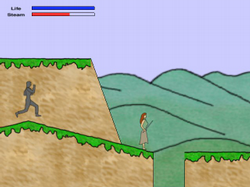 Heroine Standing on cliff, ninja about to attack her, mountainy background. She's built up some steam.

My Plan of Action

I confess I have ulterior motives. Therefore quite a few parameters of my game are already determined.

My entry will be a 2D action sidescroller, with a female hero who kills everything that moves. She'll have a variety of attacks depending on input combinations. I'll do all the artwork myself; I imagine the terrain would be kind of like Sonic the Hedgehog (though certainly not as pretty). The enemies will be pretty stupid and typical. Levels will be stored as XML. It'll use PyGame, and, despite being 2D, OpenGL, with the expectation of hardware acceleration.

I am planning to write an automatic terrain generator; hopefully this will give the game a lot of breadth in a short time period. The actual sort of terrain it'll generate will depend on the theme. For example, if the theme is "doorways" it'll probably generate a maze with lots of doorways.

My plan, roughly in order:

Good luck to everybody!

A little too far off the theme

Two problems here. First of all, my entry does not have anything to do with steam in the literal sense. Rather, I have a woman who builds up steam to enhance her attacks (she's mad, because this game is just a contest entry and not a real game :).

Ok, that's almost not too bad. The second problem is, she's not exactly running on it. She can kill ninjas just fine without building up any steam; it's just easier if she does.

So, I will probably end up submitting this as a non-entry.

With some luck I'll be done tomorrow.

ok, having completed and verified that no bugs remained in the graphics engine, i finally get to polish up the graphics.

heretofore i'd been testing with an embarrassingly bad model of a town i whipped up in a few minutes early in the week:

about an hour ago i began working on the real scenery. here's a sample of what i got so far:

i know, i know. it still looks pretty bAd and sPazzy, but best i could do in an houR. i guess my modelIng skilLs are a little rusty. unFortunately, the game engine was harder than i expected. i was only getting a disappOinting 140 frames per second; spent quite a Lot of time getting up to a satiSfactory 200.

i'm hoping i can come up with something that looks presentable in the next few hours. oh well.

Building Up Steam is done.

Windows binary is here. Source is here. The Windows dist I tested with Wine (I don't even have Windows), but I don't expect a problem.

I'm mostly satisfied with the features, and definitely like how it looks. I'm a bit disappointed with the breadth; I would have at least liked more than one kind of enemy and more interesting levels.

I'd like to give a big thanks to richard everyone else running this contest. And good luck to everyone else, and hang in there.

I am not going to continue working on my game. :)

As I said, I had an ulterior motive for my game (which is kind of why mine didn't really fit the theme). I may use the experience in a similar game down the road. But the code itself? Nah. I prefer a thorough, well considered approach to progamming, not the "smack it with a hammer until it works" approach I used here. :) I'm surprised I was able to tolerate such code for a whole week.

In case anyone cares, the new game would be called Cinderella Acts. (Tagline: Tired of waiting for her Fairy Godmother to show up, Cinderella decides to take matters into her own hands.) And she'll be wielding an axe (a pun on "acts", and more out of place).

Thanks to everyone (somewhat) for your feedback, and congrats to the winners. Good job.