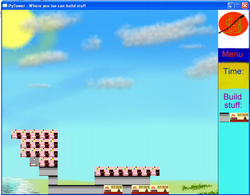 A Pyweek 4 entry by Mikle

A Sim Tower clone. You play as a big contractor trying to build a tower while managing the rooms, making restaurants etc. Game May Vary :)

Well this is my final game. So I gotta write a bit about how was it and stuff.
My game is PyTower. On the first day I had a hard time deciding with which concept to go. I decided cloning an old favourite, Sim Tower - one of the less known Sim games.
So I started all happy, coding like a monkey, and doing no planning at all. That proved to be a mistake, as my code looks like patch adams :)
But now I have a working game, with about 1500 lines of code. I gotta say I learned a lot of stuff in the process, which will probably come up in the post mortem.

About the game:
It's a building game. You got a tower to build and 3 types of bricks. Not very exciting, but it's a sim...You can keep playing until you are rich and will retire. It even has a plot.
What it lacks is game play :) But it's the first game I have both started and FINISHED in a while now, because I tend to leave half finished games behind me :). I like it, and I hope you will too...Be gentle...

About the competiotion:
Wow, some very very good games this time around, especially in the individual category...I don't know how many will finish, but by what Ive seen in the IRC channel and here, It's a lot...And high quality too. So keep on pushing, you still got 2 hours!
Good luck all. I must get some sleep...

Well it's finally starting too look like a game, with money, and intro, even people buying your houses (you don't see them though :().
Try it and drop me a line...

So as we are nearing the end, I got no time to post, but I uploaded a few screenies, and I hope to have a Workong thing (not a fun thing) by the end. Hmmm enjoy the new screenies.

I have no will to write stuff, too tired, I'll post in the morning. Just a little comment - TreeForm and team are actually managing an MMORPG...That's SICK...Keep on the good work (Not only their team, everyone :))...

What will you use to run the games? I'm toying with the new features in 2.5 and I don't want it to break on computers that didn't / can't (apparently ubuntu is written in python, so you can't upgrade without breaking the kernel :)) upgrade...
So what will you be using?

Well, I think I managed a lot of stuff, especially considering a lot of "first time problems" for me in python and in game programming generally (that means that I probably solved it the wrong way :)).
So what have I accomplished today?
1.Fleshed out the main idea, including how it will be done (well a bit).
2.HUD - Heads Up Display. Again, very generic, modular, read from an ini, as it's gonna be subject to many changes.
3.Got my first brick type (gray) and it works. Check the game upload, and the readme.txt
4.Graphics! Aren't they pretty? Thanks to Pixarra's TwistedBrush. My art never looked less programmer :)
5.I've been spending way too much time on graphics (TwistedBrush makes it so fun!) and even more time on IRC...That should be cut off, more code tommorow. No food for me! No sleep :)
6. I don't usually drink coffee or alcohol to help programming, but I think I shall start...With the alcohol I mean - not desperate enough for coffee.
7. Download my game and play it...Please drop a line about the features you would like to see in a SIM TOWER clone...Other stuff you want to comment about. Especially people that test it on linux.

That's it for now, keep on the good work, and come hang out with me in the irc channel. :)
Mikle

So it was 3AM here when the theme was announced. So I heard it and retired, thinking I probably will do an IcyTower clone or an adventure game where you are stuck in a mall and the doors are all blocked (so you gotta find and climb the stairs etc). This idea is cool and funny but I think I was shooting too far, doings it from scratch will take more than a week.

So somewhere in the middle of the day a cool idea struck - Sim Tower! It was one of the nicest games I remember, it is a cool idea, and it gives the theme a twist.

While I was still pondering PyTower VS adventure game, I managed to make some "generic" menu code (see screeny) and skeleton of a game.

I'm gonna plan some stuff, maybe make a class datagram, or a DD and then retire to sleep.
Some tools I'm using in the development process: Komodo - The killer IDE... MS OneNote - A blog for myself...Including to-do lists, notes, and just coolness :) An Ubuntu VM I'm trying to make into a test comp.

A comment on other people's games - WOW! Some people already have levels and tiles and stuff...That's just amazing...Keep on the code monkeying!