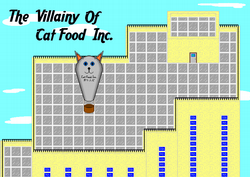 The Villainy of Cat Food Inc.

02:00 GMT+1 - Finally, the theme of Pyweek #4 was released... Yay! One of our Favourites! - After some brainstorming (and some hours of Guildwars PvP) we crawled into the bed...

13:00 GMT+1 - Gack! Woke up too late! I started my work on some neat graphics *cough*, while Serval started working on the code...

18:00 GMT+1 - I finished the first batch of graphics, Story is now complete. I watched Simpsons, washed the dishes and realized that she has finished the main menu - yay!.... We won't finish. ;)

Ok, now I have some things working. I mainly fiddle with the code and try to find out how to do this or that. I can only hope that I'll remember some of the stuff I've learned today. Heh.

We can display some tiles now, so all we need to do now is use Zahmes fancy graphics instead of those ugly placeholders.

Yay! Got up earlier today (11:00 GMT+1)! Effectively, we have not achieved more than yesterday until now ;(

I finished a second tileset for another leveldesign. Next step would be another level and than most importantly - Character Design. x_x

Serval currently fiddles with moveable blocking objects - after she was able to define blocking terrain/collision detection and after messing it all up again to rearrange all those code lines so they do what they did before... but better, as she said... I will just trust her on this ;o)

Due to our highly efficient work-done/time-left-ratio I was able to generate our "Map-Editor". Please see our extremely convincing Editor-Fake-Screenshot ^^

It took me a whole day just to create 1 (one!) character - njaaarg XD... I used an template for RPGMaker Characters, which can be found on our Diary page (I uploaded it so everyone could use it - if anyone wants to...).

On the bright side, Serval was able to achieve multiple codish thingies today. A character that would turn into the direction it is going (well, if there *would* be a character-image implemented, yet), loading the maps with the correct tiles [yay! We have full functioning levels], and other things I cannot remember right now - but we made progress on this front, that's for sure.

Next steps for me are:
- Drawing another Character (the evil foes)
- Drawing the title Screen
- Drawing screens and scenery for Intro/Outro/Cutscene and whatever we will probably need.

Next steps for Serval are:
- AI-Script for the evil-guys
- Implementation of some kind of "walking-animation"
- some small sequences and scripted events
- finally (when I'm ready with the graphical stuff) scripting the intro/outro/cutscene


Unfortunately, we probably will not finish this game until end of competition (as predicted), as we will have to stop developement on Thursday evening (Day 5) and submit the version we have then as "final" one. Because we will be somewhere else during the upcoming easter-weekend and will have no access to internet.

Anyway, we try to get as far as possible... and will not finish ;)

Another day passed and we have made some major achievements.

Code had the most progress today:
- The AI script is working just the way we wanted to have it... It works even better and created some interesting events we did not expect - but these just fitted :)
- Game Over Screen appears when Johnny or Evilguy get hold of you - splendid! :D
- A small scripted sequence now occurs at every level start
- Some corrections were made to improve/sort the code - mainly for better access... I think... Well, Serval assured me that this was done... I'll just believe her ;)

Art/Graphic progressed, but not as aspired:
- Scenery for Outro was generated
- The Character Johnny and Evilguy were drawn (both looking the same).
- ...

I also used some of my time today to search some soundfiles (from the databases listed on the pygame-resources page) we will use - Fortunately, we found all we need, so we just need to implement them.


Our remaining To-Do's for our last PyWeek Day tomorrow:
- Creating a second Chara-Set for Evilguy, so the player is able to tell the difference between Johnny and Evilguy
- Implementing Sound-Files
- Implementing new Chara-Graphic-Sets for Johnny and Evilguy
- Creating a larger transparent image for the outro (quite important)
- Implementing the Outro-Images and Scripting the whole Outro-Sequence (also important)
- Implementing the Title-Screen (still important)
- Creating some images where parts of the story will be told, we are not covering with the game we will send in for this challenge... We will cover those Story-Parts in a later version with an real intro and a real cutscene - that's for sure!
- (Maybe) creating another level (lowest priority)
- Creating some Credits
- Fiddling the whole package into the PyWeek Skellington
- Submitting the latest version as Final version
- Heading off into the Easter Holidays


We would finish - If we would have one or two more days ;o)

Serval is currently packing the final submission package of our small game. It is functional, and as far as we have seen bug-free (except a rare error in the AI-Script which needed special upfront preparation by the player - but we had no time to look further into this and create a routine to avoid this error)

We had to crop the intro sequence and the catscene to textboxes due to lack of time. Sadly, there are also not more than 2 levels in this version.

We probably *will* continue our work on this game after the challenge, which will mostly consist of cleaning up the code, adding some new "functions" to newly added "fields", adding character movement animation and adding a lot more levels!

For us it is left to say, that we had a lot of fun (and some difficulties to keep our sanity... ;)) during our first PyWeek challenge and that we are a little bit proud about our game - After all we learned alot!

Enjoy the rest of the challenge and good luck for your projects - some of you have achieved amazing things until now! o.o

Post Natum (not Mortem - too much left to do)

Ok, I've rated most of the games now (many of them are really great!), so I guess I should start writing my "final" statement about how much went right/wrong for us/me in Pyweek4. My team-mate Zahmekoses wrote much more comments than me, so I may write a lot of pointless stuff here just to catch up.. Yaddayadda..

Some first-timer's memories:
Day 1: The theme is announced! We are highly motivated. I have little idea how to put our game idea into working code, so I go for straightforward, naive solutions that'll be a pain to clean up. I can think about proper solutions later, right?
Zahme has some fun making the 32x32 pixel tiles for the ground, metal crates and wooden crates and more little graphics and wonderful fake-screnshots. We won't finish but we'll have some fun.
(....)
Day 5: Trying to implement something that handles cutscenes but my brain doesn't work. Tired of browsing documentation. Zahme struggles with the cat balloon. Pixels driving him insane. Start screen done. Replacing buttons. Simple code to handle story-images. Ugly crook for outro scene. Watching a funny movie in cinema... feeling a little more human.
Back from cinema. Cleaning up our release (e.g. delete all the things we/I couldn't finish in time). Trying to make a nice package but I always end up with weird packages where things are missing or different. Must get up early tomorrow.. Need.. to.. upload.. file... so.. tired....

...
Um... I guess some other things happened between Day 1 and Day 5, like distracting each other by asking "What are you doing?" or by offering chocolate and "Nyanyaihatepaint!!" and insightful conversations like "Huh???"-"Yeah, I expected that error."-"But it worked yesterday!?" ... And losing the ability to speak and think (at least on my part). All those precious memories..

What went wrong: I didn't prepare and I didn't feel like getting into the Skellington during Pyweek. And I couldn't make a Windows binary because.. uh... I didn't have the time and I didn't prepare. I wasted much time looking for basic information.. I didn't take care to keep a Python 2.4 testing enviroment around. Not to mention some horrible codepieces...
Zahme is unhappy about some of the graphics (I can live with them, but he's the graphics artist). And our game has only 2 levels.
What went right: We made a little game! I honestly didn't believe we'd get that far... it probably worked because Zahme did the graphics so I could concentrate on messing up the code. Btw: Thank you for all your effords and putting your sanity at risk, Zahmekoses! I like your graphics....

Until then and thank you all for this Pyweek,
-Serval