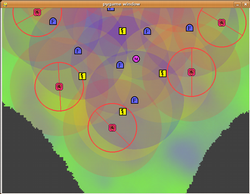 I didn't think I was going to finish, but I did! The game is called Grey, and it's about escaping from out-of-control self-replicating robots.


0% of respondents wished to disqualify the entry.
Respondents: 23

I can't believe the Robot theme was chosen. I don't like it for the same reasons as everyone else who doesn't like it. I could just take the good idea I had for "Formation" and make the character a robot, but I won't do that.

Okay new idea. You people want robots? I'll give you robots. I'll give you more damn robots than every other entry combined! My game is tentatively titled "Gray", and it features 10^20 robots per pixel.

So far, I've got an efficient (enough) cellular automaton that runs in a separate thread using sets. I've never used python sets or threads before, nor have I ever made a CA, so even if I don't do anything else innovative or new, I've already learned three new programming topics, so that's good.

Now I just need some gameplay....

I've added terrain now and it looks much better than when it was just two colors, gray and teal. It's not exactly artistic, but it's good enough for me.

The gameplay still needs a lot of work. The only building I have so far is the shield generator shown here. I'm afraid it's going to be a fairly bland RTS as far as building stuff goes. On the other hand, I'm very happy with the navigation system I've got going, and I've got ideas for a cutscene or two that I like.

I wish I'd never heard of threads!

My game has been suffering some very frustrating lag, and I've spent all day trying to fix it. I could tell that it wasn't allocating time properly to the different threads, but I didn't know enough about threads to fix it. Finally I backed everything up and then sewed the two threads together into a big mess. The code is so horrible now, but it runs smoothly!

So it looks like I'm still in for now. But I have a lot of catching up to do tonight!

I have a starting screen and an ending screen. That's enough for me; I'm calling it done! I didn't get to add the last plot bit that I wanted, so there's a useless building in the game (warhead). Oh well.

I guess I'm done "packaging" it, whatever that means. I just renamed my main file to main.py and copied over the run_game.py file. I hope that's good enough. I wound up having to go without sound, and I don't use too many weird features, so I'm hoping it'll work just fine on Windows and Mac, even though I can't test it. (I realized at the last minute that most Mac users can't right-click, so I added a keyboard shortcut just for them.) :-D

This game makes very heavy use of alpha filtering. I imagine it would be unplayable without that feature.... But most systems should support that, right?

This isn't an announcement, just a note to myself. I wasn't sure I would be revisiting this game, but now I think it would be a good learning experience. I shan't get to it until after judging, since I'm busy enjoying the other entries now! :-)

First, I need a much better grip on inheritance in python and also python containers. The class hierarchy for buildings in the game seems ideal for inheritance, but right now it's a total mess. So I'm going to try to find a good python tutorial. I also want to work on optimizing the cellular automaton. I think it could cause lag on slower computers. I'm also learning things like separating data from code by looking at the other entries. So I'm expecting to completely rewrite the code once.

I also hope for some good anonymous feedback from the judging. As for features I already want to add or change:

I think I will not add more levels. I'm big on a game not having more levels than its variety of gameplay justifies. What I might possibly do, though, is have an Easy mode (which will pretty much bet what it is now) and a Normal mode (with the additional features).