copse (noun): a thicket of trees


7% respondents marked the game as not working.
Respondents: 13

"Cops" was my #5 theme choice. I'm not inclined to make a game about police right now.

"Copse" is a homophone that means a small cluster of trees, so that's what I'll make a game about! I'm expecting the possibility of comments saying I used the theme wrong, but I'll live. As long as it's clear I didn't ignore the theme. Here's some stock image inspiration: 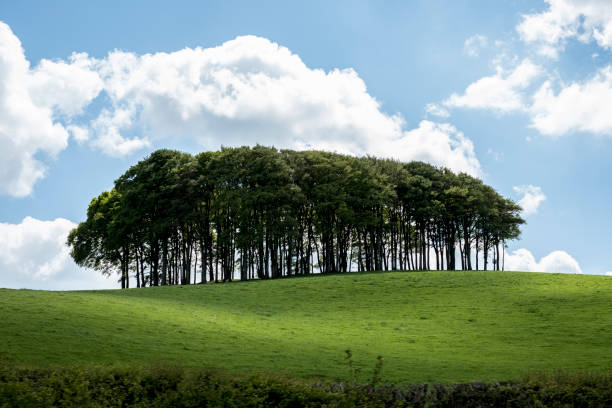 I had one issue with uploading a tgz, but switching to zip format worked fine. I think the upload should be working now. I'm still running Python 3.6 so and Pygame 1.9, so if anyone with a more up to date setup wants to test the game, I'd be very appreciative!

Bugs or issues running the game? Follow this link and post them under the earlier diary entry.

I don't have too much to say about this entry. I wanted to take it a little easy, so I didn't try for anything too groundbreaking or unfamiliar, and I think it worked out all right.

My first idea involved using a copse to conceal something, and you have to place the trees so that there's no line of sight from the outside to the thing in the middle. This led to a sort of tower defense idea with creatures coming in from the outside and you have to plant trees to divert them back out, and that led into collecting them instead. I went with a hex grid instead of a square grid, because I wanted there to be plenty of crisscrossing paths, so more ways to travel through a tile is better.

A few years ago I made a game for the Zero Hour Game Jam that has some strong similarities. I was also inspired by my vague memory of the game Gondola from PyWeek 7. Building something that sorts items into groups can be a really satisfying mechanic.

The puzzles turned out harder than I expected them to be at first. I started by designing what I thought would be the final level, which I think is often a good place to start. My initial sketch had 21 rings, but I cut that down to 12, and it still took me much longer to complete than I wanted. I decided to leave it in as a bonus level after beating the game, and I made a smaller level with 6 rings to serve as the actual finale. I originally envisioned several more complicated mechanics, but these ideas did not last once I had a prototype and saw how complicated the basic mechanics already were.

I always have at least a couple graphical effects that require some work, and this is often one of my favorite parts, even though it doesn't actually add to the gameplay. I tried really hard to put that off until the end, to make all the levels and gameplay first, and then just use the last couple days for polish. But I got too excited thinking about it, and on Wednesday night I broke down and started working on the graphics. This turned out to be lucky, because the graphics took some work. Not the special effects, actually, but the basic images. It turns out that it's really hard to visually distinguish different types of trees when all you see is a cross section of their trunk. It also took a surprisingly long time to think of using a flower with six petals to indicate spawners. I think I need to remember that graphics involve design challenges as well, so it's not a waste to get started on them early.

As always, thank you very much to the organizers, and thank you to everyone who tries the game!