Animals flying hovercraft, why not. It worked for Star Fox.


5% respondents marked the game as not working.
Respondents: 16

This is not a 3d game, but I'm making some of the assets in Blender. Here's the first one:

I'll post more about it later, but in the meantime if you try the game and run into any issues, please let me know. Thanks! I made a video of the gameplay! Check it out here: 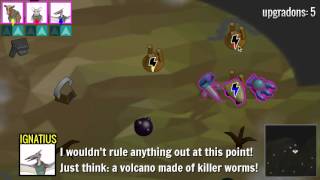 If you haven't played our game Shattered World yet, you may be surprised to know that it has 118 dialogue clips. We got an email asking about our process for creating dialogue. Hopefully this will be useful to anyone else wanting to record dialogue for their next PyWeek game!

Basically I put out a "casting call" by posting on Facebook. Our voice actors range in experience from high (Randy as the voice of Mel and Pax) to low (me as the narrator). Experience and talent obviously count for a lot, but patience and quick turnaround time are really important for PyWeek, so I favored people I knew could get it done in time.

Because of the nature of PyWeek (a lot of the game doesn't exist until the last minute), your actors will have a very incomplete picture of the game. Try to give them as much as you can. For instance, I failed to mention at any point that the characters are in ships talking to each other over radio, and some of the lines don't make sense without that context, so the actors had a harder time delivering those lines than they should have.

It's helpful to write a couple of sentences about the overall mindset or attitude of the character, and 1-2 words for each line about the emotional state of the character during that line. Think of some famous characters from Star Wars or The Simpsons that are similar to your character. Still, your actors will probably have questions on delivery, so expect this to take some time.

I recommend asking your actors to use their regular voice unless they have a lot of experience. Accents, or pretending to be a different gender or age, are harder than you think to pull off.

Here's a great comparison between a $36 USB microphone and a $500 condenser mic + interface setup. A professional would obviously consider the more expensive setup to be worth it, but I think for PyWeek the cheaper one is still pretty good. Audio quality varies a lot among cheaper mics. If you're in the market for one, we recommend Samson Go.

Our audio producer (marybee) loaded all the data into a program called Ableton Live, either by directly recording, or importing WAV files. Each character was loaded onto a separate track, which lets you easily adjust the volume or apply effects to all of that character's clips. Overall volumes were adjusted so that all characters are roughly the same volume, and background noise was removed from the spaces between phrases by zeroing out the waveform. The workflow looks like this (click to view full size): She also selected takes and chose the start and end time of each clip to avoid too much dead air between lines. Each clip (in the red boxes) starts with a fade in and ends with a fade out. Once all the effects are done, the clips can be bounced (exported) one at a time to individual WAV files.

Finally, she applied special effects to some of the characters. Live has a ton of possible filters and we looked at some of them, but in the end we just went with raising and lowering the pitch. I have trouble finding anything that sounds good with the more exotic filters.

If you're looking for a free alternative to Live, Audacity and Garage Band can do the same things. At any rate, you should expect it to take some time to get familiar with the software.

No matter what microphone and software you're using, there are some things you can do to improve the audio quality.

EnigmaticArcher, who did most of the 3-D modeling for Shattered World, just got a new 3-D printer and decided to test it out with a couple assets that might be familiar if you've played the game: