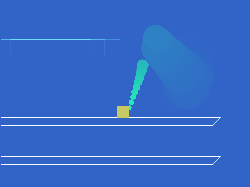 A game with no sounds, sprites, or fonts. Fun eh?

Hi I'm eugene am new to just about everything. I only just started learning python and I've never made much of any games. As a result I'm gonna do something crazy: No sprites, No sounds, No fonts.

This way I can focus everything on learning and coding instead of trying to get the right sounds and pictures and getting ttf loading to work for me. If I have time at the end of making my dismally simple game I might add sound effects.

I'm sure it's too late but a reallyu cool feature would be an rss feed so I can just check it for updates and posts instead of the site.

Ok I've uploaded my current version. I've been trying to fix this stupid problem and I cannot figure out the source of the problem. If you run it as is the yellow block works as it should but if you comment the lines that are noted as such then it starts jittering. I split it into two blocks to figure out why it might be jittering but to no avail.

Anyone mind giving it a run.

I'm interested to see what people think about my current version. I also want to know how well it runs on a mac. I've got the steam, player, powerups and platforms working on a basic level so far. All that is required to play is pygame.

Download link is here : here
Even though there is no current objective it's sooo much fun to just steer the guy around.

It's starting to look like I've got a chance of winning. I've got quite a bit done but have a ways to go.

Let me know if I should keep the green steam. I still need to add enemies, a way to win, a persistent level system and some other goodies.
Also, I've had one problem I just can't solve to far. Give a list of points which a block of the class platform is supposed to move at some arbitrary speed every time platform.update() is called towards the next point on the pointlist.

Given the position of the first node(or point or whatever), the second node, the center of the block and the wanted speed what do I send to platform.moverel() ?

Moverel(x,y) is a simple function I made that moves the object right by x pixels and down by y pixels relative to it's current position.

Basically it adds the arguments to all the points.

I was wondering, How many of you will be able to make use of multiplayer features and with what limitations? Can you play something using the same keyboard? Only over the network? All your friends are a mile a way so it has to work over the internet?

Finally I'm done. Well, kinda. You can take a look at the latest version on my entry page.

I've pretty much all the featuresI intend to have so tomorrow will consist mostly of polish and content. The things I might still add are a few more powerup types, a score bar, and maybe if anyone wants and time permits an endurance mode where each level get harder and harder for eternity or till you die.

I need to start working on making a ton of levels especially if I want to get a high score for fun.

I made two kinds of enemies: pathers and steamfeeders. Pathers just follow a pointlist and trod there way along. If you bump into them you get hurt. The steam feeders are far more interesting. They are attacted to the stream of fresh water coming from your behind and if there isn't any to drink they get restless and will attack you like a swarm of bees.

Both enemies can be killed by releasing smoke or death steam or something. Press x or ctrl while moving around. Of course using the stuff uses up your steam faster.

Unfortunately I only have three levels available but they have everything currently available in the game.


I was also wondering what I should do with this script after pyweek. Should I maintain and improve upon it? This is my first game so it probably a bit messy and poorly done.

Well technically I was done in time.....

Editing a game ofver vnc and trying to test it by closing the game winodow everytime I needed to change direction made it a bit hard to finish up my game.

I had to leave my relatives house a bit sooner than expected so even though I had a version I thought was uploadable it actually wasn't because my copying left out some braces and such.

Mirror is available until richard makes that torrent. You can tell it's the same because of the poorly done levels. Of course since I may have made secret improvements you shouldn't trust me.

However if your bored try to kill the mega blob at the last level completely.

Thanks again so richard for being to understanding.

Oh and if a few people are actually interested I'll keep on improving it and adding stuff. I just don't want to maintain the game if nobody will play it.