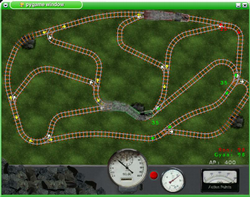 Having taken PyWeek #1 and had great fun, we return to take PyWeek #2 too. Have been waiting for this long ago :)

Aww.. we progress slowly. However, we have nice graphics and music by now, thanks to Goss and Syl.

The game logic is quite OK, if we are lucky, we can play a minute without an exception :)

There are still many to do (especially to unlag the network code.. I don't know how will we do that..)

The past days flew away fast.. It was exciting to see how the code, the stage editor, the graphics , and the music come together slowly..

Now I'm almost up for a whole day (greetings mates! :), and things seem to be working quite all right (more than expected..). Coding some intro screen and menu is still back though..

All right, a little teaser about the game: It's a multi(2-3)player networked game (no AI support yet.. maybe sometimes later), mainly for LAN/stable net connection usage (heh, mostly because the initalizer UDP packets' arrival is not verified :d .. bandwidth usage is quite small)

The goal is to gather a specified score, faster than the others do. A player controls a train, and receives score based on the number of carriages he pulls. You can 'steal' carriages of other trains by bumping into their back, or in a frontal meeting, beeing the faster one.

Of course, having more carriages makes life difficult: it's harder to accelerate. You have to input coal to the engine to maintain a steam pressure, and keep acceleration high (if you want). Coal can be picked up on specified locations of the railway, and can be piled up for a limited amount.

Switches can be controlled by 'bidding' for them. The player, who gives the most action point for a switch, when any train comes near it, determines it's position.

Well, sounds complex, but it's straighter when you play it (at least we hope). I'll post a screen-shot, and return coding..

I'm happy to see that so many games made it to final state. Ours is also finished, as it's primary goal was to be a multi-player game, but I'm also a bit disappointed, that we couldn't implement a machine opponent.. there is no time for anything like that now.

Python source packed, manual included. Ask if anything is ambigous.

This week was a big rush competing with the clock. I really liked working on this idea and it was fun to play against each other. However we didn't have much time to test the game in mupltiplayer. Most of my time was consumed by creating the level editor which is currently in a half finished state. It contains one bug for sure and it lacks many features. Initially I didn't want to release it (it's source is a big-big mess :)but Ron included it in the final package so I said let it be. However I didn't created documentation for it (at least not in english). So here is a very-very brief doc for it.

Well, well it's over. I would really like to thank everyone who found our game worth playing nevertheless it's a bit incomplete and lacks many features we would have liked to implement.
However the developement won't stop at this phase. We would like to create a complete game and fix those annoying bugs. Ron rewrote the net code not so long ago avoiding the three player hangup bug. I just have finished rewriting the level editor so it's more or less stable and suitable for creating more complex levels. If Ron gets back to the dormitory we'll release a patch including all the modifications. We are planning to create a single player AI, so stay tuned! :)