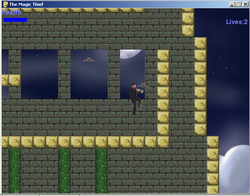 Disgruntled-Defense-Industry-Geeks that would rather be gaming.


6% of respondents wished to disqualify the entry.
Respondents: 30

Can't wait! This will take my mind off of the 11 hour work-days! At least it did for the pygame.draw competition :)

Toads in a toaster

I don't feel like I've gotten much done, but I've thought a lot and I'm confident that we'll make some progress shortly.

I'm going to be working on a Resource Editor, then move on to a Level Editor.

While I'm mucking about with the utilities, Skaro will be engineering us a game engine. Once those tasks are finished, we'll figure out where we are and where we need to go.

My current task is figuring out pgu. Always picking new libs to learn at crunch time.

After hitting a glitch with pgu's FileDialog (whether the glitch is with me or with pgu, I am not readily sure), I am scrapping its use (FileDialog, still using pgu) and moving to a cludge, why pick what you can hard code. This is a specific use utility, not general purpose, so hardcoding, though icky, is perfectly reasonable given the time frame. Maybe I'll have time to revisit the issue when time is not so fleeting.

Other than that, I have heard good things from Skaro about our game engine, so I figure we are making good progress. It's only Monday. I'll panic Wednesday, then think we're doing amazingly well on Thursday. Then it will be a full out fit of activity until the deadline.

It is officially Thursday.

And, as I said previously.

Why am I not further? I have so much to do!

Ok, I have made leaps and bounds and half the slow was learning pgu , but still. We need to start creating game resources!

Pfew, things are finally starting to gel a bit.. My insistance on rolling a new collision/sprite alignment system rather than using pygame's might be part of it ;)... although a good deal of concept is borrowed from Donal and I's last pygame adventure TrashVacHeroX.
Very little graphics so far... engine first, gameplay tuning, then resources...
time will tell if that's the right order.
Well.. some resources are in, our sound-man (and player sprite actor) came through in grand style, and the proof-of-concept player sprite is about half fleshed out.
so much more fun left though ;)

I just found a problem in main.py. It tries to import psyco.. If you don't have psyco, just comment out import psyco and psyco.full() bleh I was sure I had try/except blocs around that...

ohwell, not toooo bad for never testing on the platform.