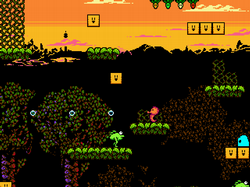 Get The Deluxe Version Here!

When you play - make sure to check out all 3 phases - Jungle, Volcano, and Moon!


1% of respondents wished to disqualify the entry.
Respondents: 45

Hey, My team is wanting to build a Mario3 style game this time-around. We've got our coded and music/sfx covered quite well at this point - but we could use as many people as possible on tiles/sprites/levels. Reply here if interested. Or maybe I'll be in #pyweek. Phil

I haven't released a new update of pgu in ages, but there are a handful of minor bug fixes in svn:

There is a bug in it that makes it not work with python 2.5 while using tilevid, etc. If you plan on using tilevid .. if you have a moment, please send me a patch. (The bug is, I use the keyword "as" as a variable. Easy to fix, but I'm pretty busy right now!) And I can put it in for you.

I'm working on a game - sort of a Mario 3 clone. It's going to be all oldschool and low-res and using just a few colors. And I need artists to help make the game! I've already got a few people helping, but the more the merrier. Once the tile graphics are made, I'll also need level designers to put together levels.

The basic plot of the game is "Oh no, the evil overlord stole the galaxy crystal, we must fly up to the moon to get it!" In more concrete terms - first few levels are in a jungle. The next 3 levels are flying up an exploding volcano. The last 3 levels are going to be on the moon.

Also, if you like to do spirite art, that'd be great too! This is all for the pyweek game development competition this week, and should be lots of fun. Join us on #toba on irc.freenode.net to talk if you're interested in helping out!

Our game is progressing nicely. We've got some graphics now, and I'm tweaking the gameplay elements. There's still a lot to do, but fear not, the game will be super fun and a massive spectacular platforming adventure experience like never seen before!

gerry / trick went on a huge rally today and got loads of tiles done. We've got a number of folks helping out with sprites and stuff.

Got in nifty tile behaviours today as well as lots of magic codes to control how things happen. It's starting to feel like a game now.

Other code is generally getting cleaned up, bugs getting fixed, music getting made, etc.

New goodies: If you're interesting in having a part in building this game, join us in #toba and volunteer to help build some levels. We'll use the best ones for the game!

It was a great pyweek!

My team is likely to do some updates in the future, and we'll be hosting those on my website. In the meantime - check out that link for more Bubble Kong screenshots!

Apparently our game Bubble Kong crashes eventually if you start it with run_game.pyw, because the game prints out debug messages that we didn't have time to remove before the challenge deadline.
Please start the game with run_game.py instead.

I'm working on polishing up Bubble Kong for a deluxe release sometime next week. The main thing our team wants to get into the deluxe version is really nice levels. If anyone wants to help out and design some new levels for the game: Sometime next week we'll vote on which are our favorite levels and then do final bug testing and cleanup of those levels. I'll also put together win32 and macosx binaries once it's all done :)

... Actually, we re-named it back to the original name it had "Barbie Seahorse Adventures" ..

Check it out here.

It's got a bazillion bug fixes and about 10 new levels and all the lousy levels were removed. So have fun!

add your game to pygame.org

Make sure to add your game to pygame.org (even if it doesn't use pygame) - I'll update the website in a couple of days to have the "featured games" be the top few entries that are added.