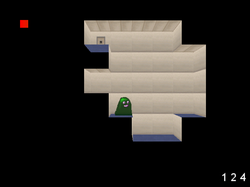 Two artists and programmers from sweden


2% of respondents wished to disqualify the entry.
Respondents: 31

There's a version of the game up now. You need pyOpenGL and pygame to run it.

You can now climb stairs and walk around, and the level is saved in a file. The game has joystick support and other cool stuff, so try it out.

We got collision working, basically... not all parts, but I figure it won't be too hard. Last day will be for enemies, puzzles, levels, music, SFX, intro, AI, and stuff. Well, we will be working all day though, hopefully around 14+ hours each, counting eating too. Now the character is a liquid blob. He can resize at will (to solve puzzles later). We also got a tile system well started and working.

At last it seems like something is happening here. Skalle's internet-connection was down a couple of days, so it was a bit problematic to communicate and share code. But now things seems to be back to normal.

Now we have set up a subversion repository and are working at full speed, but we still haven't barely begun on the real game-code. Friday and saturday will be pretty stressful, but i think we will make it.

I just added a screenshot of the game. It will be playable with a gamepad (which would have been nice to see in the hardware poll by the way).

I stayed up last night until the theme was decided, then I went to bed, still with no idea. Today we've decided what game we will make. I've made some concept sketches and joypad support for the game while Teppic is making the framework, sprite classes and stuff.

The game will be 2.5D (we use sprites in a side-scroller manner, but backgrounds may be 3-dimensional). The game will most probably be about an alien that had been captured by humans, and now has to escape (or disappear) out of their base. The one thing that the humans didn't know when they put him in the cage is that he has a special power: if he gets in touch with liquid, he can turn liquid himself. To win the game you must escape through sewers, air vents, toilets and more, taking on the shape of water, glue or coffee etc.

As of now we think the game will be a puzzle game with several or many levels, every level a part of the human base.

No pictures yet though.