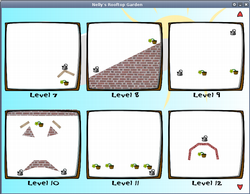 A Pyweek 2 entry by alex

Have made suitably beatiful steam, but no ideas for a game...

Steam now collides and diverts around polygons, causing condensation to form and water droplets to run down the polygon and off the screen.

Steam rises, hits a cold surface and condenses, forming a water droplet which runs along the surface until it falls, bounces, and hits the hot plate, vaporising instantly into steam, which rises... Conservation of energy!

The collision code did not scale at all well to dealing with lots of collision objects, so wrote a uniform grid check on top of it. Debugging this took a lot longer than expected. Still will need tweaking, depending on the game scenarios, but seems to handle about 1000 particles with any number of colliders now at around 20 fps. Anyone know a good Python profiler? Also added mouse-picking code.

Whee.. now we can place objects and move them around and see how the steam and water react. Don't worry, the gaminess is not too far away now!

Have a play: rushed.tar.gz (requires pygame & pyopengl). Click to place an object, click&drag to reposition it, and click and drag the rotation handles (shown below) to rotate it. Easy eh?

Lots of work done today but not so much to show for it. Most of it was spent rearranging code, refactoring and optimising. Moving the collision, response, game-logic and drawing code all into separate components not only saves my sanity, it boosts framerate from 10fps to around 20 for a typical scenario.

A more robust user interface is in place now, so selecting a tool, dragging & rotating it and having all the collision models update is working pretty solidly. Getting the rest of the tools in should be a snap. The screenshot here shows the level editor (the blue collision boundaries are editable).

Also in the screenshot is a flower, somewhat droopy.. indicating it's not receiving quite enough water.

Still a mammoth amount of work to be done.. hopefully a tad under 24 hours' worth :-)

Most of Friday was coding and drawing, then 5 hours sleep, then 22 hours straight coding since then until now. But it paid off! I honestly didn't think I'd get a playable game out of this idea, but I did, and you can play it.

There are only 8 levels so far, plus the sandbox free-for-all, I will see how many more levels I can add before the deadline.

You get value for money:

Nelly has had a couple of bugs fixed, some UI tweaks to make it a bit more mouse-friendly and, by popular demand, a level-selection screen. You can download the update here nelly-1.0.tar.gz or admire her new permanent web page: http://www.partiallydisassembled.net/nelly.

I had lotsa fun during the competition, so many thanks to you all and Richard especially for making it all work. I wrote a little more introspection stuff in my blog.

See you all in six months!