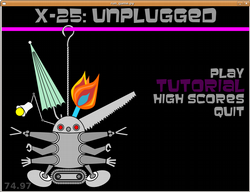 Another regular platformer. Almost. You have to hotwire this multifunctional droid to get it through some puzzle levels while collecting flowers. Our 4th time in PyWeek, this time with a smaller team (one coder + one artist).

I saw Richard's post about disqualification of games using libraries released just before or during the competition. I've noticed some time ago that for some reason pyglet1.1 won't work ok with my video card (and have of course reported an issue, which Alex has promptly answered each time I add new information). So, I find myself in a situation in which I can't make the game work (because of pyglet1.1), so I'd go for rating anything, and clicking "game does not work" (which would turn the rating meaningless) *but* if I want to go and disqualify anyone using pyglet1.1, it says the rating still means anything.
So, what happens when I click both DNW and disqualify? Is the rating taken to account or not?

I just tried to download 1stPlayer entry and the link seems to be broken... anyone else had the same problem?

Just in case, I leave this here for the record :)

(I know I have to email, and I did. But you can never be too careful)

Talking in #pyweek about how some games are great but are never packaged/finished, I suggested about implemented a "post-week challenge".

It would be a challenge with similar rules to pyweek but one or two months after it. Instead of starting from scratch and following a theme, you have to pick a game from any old pyweek, and work improving it...

What do you think?

OK, we now have kind of a closed package... I would like to have added sound+music, and a few extra features and levels, but I don't think we'll make it, and it works as it is :)

Hope you guys find it fun

640mb is not enough either

So, after a long time working in a cutscene for the winners, I ran out of RAM and my computer decided to kill inkscape instead of any other silly program running on my machine. So bad I hadn't been saving :( A bit upset, I shall keep on drawing. And saving money to update my machine for the next pyweek :)

After a few drawings for the intro cutscenes I've come to realize I'm not good at perspective at all. So bad. I hope you enjoy the drawings nevertheless :)

I saw this new today, and thought of sharing it: http://radar.oreilly.com/archives/2008/04/roblocks-simple-blocks-to-make.html It seems a cool toy to have at home for fooling around :)

I thought I'd be so happy using my brand new recently acquired LCD 19'' wide screen, but it remains small for drawing with inkscape. Just when I thought I was in heaven, I realized that using the full screen mode doesn't allow you to see all the auxiliar windows (such as text properties, exporting bitmap dialog, fill and stroke, etc).

I wish I had the money right now to go and pick up a new video card with double output so I could use my two screens! Maybe after I become famous thanks to this game :P

After a couple of days of catching a very strong flu, I'm back to coding (and re-studying my physics...) So most of the engine seems to be working now.