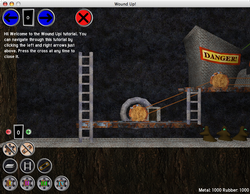 
17% respondents marked the game as not working.
Respondents: 23 A member of our team has sustained two injuries today in the course of our efforts. Fortunately they were minor and she seems confident that she can continue work tomorrow. I will be sure to file a full injury report and an updated risk assessment with our safety advisor before then.

Well, it's the start of Day 2 and time to get back to work. Unfortunately, one of my fellow team members is asleep on the sofa and the other two are nowhere to be found.

While we had two major successes again today, only one was technically our own work, so we only have one to show you. We took most of the evening off today, so there's only one real success to report I haven't tried it myself, but I'm told this was very successful. We haven't been updating much here, but that's because we've been hard at work! Here's some representative pictures from Thursday and Friday: Well, the final submission has been uploaded, and we've successfully managed to not use this diary for anything other than pictures of food and costumes.

Anyone who wants to see some evidence that we've been doing something other than eating and drinking all week is welcome to try out our game: Wound Up! version 1.0.2 is available from the entry listing page. We'd especially like to hear from people playing using Python 2.4, or on systems with slower graphics cards, as these were two of the situations in which it had the least testing. Also, let us know your high scores!

Finally, just in case you thought we'd forgotten, some photos of pie. The title isn't a euphemism, this is actually an undocumented feature:
Right clicking will leave the current building mode if you are in one and will cancel tasks if you aren't.

Two people independently complained about the lack of such a feature and I realised that it should have been somewhere in the instructions.

Time for our victory pie parade?

Reply to comments for Wound Up!

Whew. It's over and we won. Definitely an unexpected outcome, especially for our first time out. I've already congratulated Tigga on his win in the individual category, but I'd like to take the opportunity to do so again. Go play Disk Field. It's way more fun than reading this. Anyway, on to the comments. I'm sure my teammates will have more to say, but they're busy at the moment with other commitments, so I'll have to do for now.

These look to be fairly similar problems, and seem to be happening within PyOpenGL (specifically GLUT initialisation). Which OS/versions was this from? Were you able to run other GL-based games? I'd like to fix this, but I'm worried that it may be an internal OpenGL problem.

I couldn't even complete the first tutorial level. I moved all my elfs into the cog(?) and it started to turn.. but nothing happned! However, the 3d-graphics looks nice, especially for a weeks job! :)

Wow, so far, this is a winner entry for me. Very fun building those twisted setups, and very nice presentation. Of course, the tutorial was not quite good enough for me, I needed #pyweek to have the quadratic rubber cost and how to cancel rubber orders explained to me. But then.. played it for hours. I blame this for not being able to rate all the other games :P

Yes, sorry, the instructions were quite weak, as they were written in a hurry on the last day, while the interface was still being finalised. I hope that you'll try again on the hopefully improved post-competition version.

Some problems scrolling around the viewport... to scroll right the mouse has to be in the upper half of the window (I'm playing windowed because fullscreen borks with dual-head). Couldn't figure out how to complete first level in "First steps".

Oops. Silly bug. It's fixed now, so it won't be in the post-competition release. And I'm sorry to say that I never even considered dual-head displays. My bad.

Pies, plus a great game. Nice work. :) Unfortunately, it has locked up my computer a few times, but I really enjoyed what I was able to play

Crashed on me w/ python 2.5 (on amd64 ubuntu linux) be nice if the camera could be moved w/ keys, since if you play windowed it's tough to hover near the edge of the screen. The sounds (both sound effects and music) are excelent. Well done.

Oh dear. I'd really like some more info on these crashes. OS, versions of Python/Pygame/PyOpenGL, what you were doing when it crashed, etc. Oh, and the keyboard camera control thing is noted. It'll be in the post-competition release.

A really great game. One complaint: it's not obvious that there are three levels in each page of the menu. Some feedback when hovering over each one is needed. Please keep on working on this game!

We never even considered that might be a problem, but the menu was another thing which was added very late in the project. We'll see what we can do to improve things.

Was unplayably slow on my system. It took about 20 seconds to draw a single frame. Something must have been causing software rendering. Debian Linux, ATI Radeon Xpress 200.

So bad responsiveness that wasn't playable; even the menu was painful to use because of slow interaction (and my machine is pretty new)).

Ran too slowly for me.

This sounds like a serious problem. What versions of PyOpenGL were you using, and on what OS? Did you have similar problems with any of the other GL entries in PyWeek? Did you try running with particles disabled, or at a lower resolution? (e.g. python run_game.py -w -r 640x480 --no-particles)

Great game. Great concept. Great graphics. Great sound. There were three problems that kept you from higher marks. Firstly - there seemed to be quite a flicker occasionally, which started to hurt after a while. This is why production isn't 5. Secondly, the levels did tend to get dull after a while. I'd prefer it if perhaps you spent less time on 5% efficiency, and had a more steady production rate. Thirdly the interface click positioning didn't seem quite right. It was very easy to connect the wrong two cogs.

This is great! I can see lots of potential. With some more levels and variety it could be an excellent game. Some way of removing pending constructions would be useful. Odd things happen to the lighting as the mouse is moved around. It looks like there's supposed to be a spotlight following the mouse, but it doesn't quite seem to work properly.

The lighting problem is a "known issue", which we don't fully understand (or understand at all, for that matter). It seems to be related to dropping frames, so it can be reduced by going to a lower resolution. However, it doesn't happen on every machine. If anyone has any ideas, I'd love to hear them. As for removing pending construction, you can do that by right-clicking (Option-click on Mac). Sorry it wasn't in the instructions.

It's boring! Very boring I don't understand, where is twisted? plataform and starcaise?

I'm sorry, we realised that it wouldn't be to everyone's tastes, but we went with what we enjoyed. The "twisted" part is supposed to be about twisting the spring, which I don't think came across as strongly as it could have done.

This is really great stuff. The idea is not that originally but therefor your implementation and concept are exceptional!

Awesome game. Keep adding to it. :)

excellent! one of the few entries I really played longer than I had to :-) Unbelievable that you guys pulled this off in one week. I'm not DQing you because the setting is very twisted and the turning-things sort of twist, so well.

*blushes*. Thanks everyone. It's been great, and I still can't believe we won. Look out for the post-competition release in a week or two, and start practising to put us in our place in six months' time.