Game about mushroom picking on the Moon.

Known issues:
Some people (actually just one person) have difficulties of running this game with provided pyglet package. You can try to remove it and use system default one.

The most Bloody Mushroom
Presented by maral


4% respondents marked the game as not working.
Respondents: 22

I will probably ganna call my game: "Logical mushroom hunting on the Moon" or something.

I am from Lithuania. There is quite popular to go gathering mushrooms. And there is old wisdom (or superstitious thinking) not to go picking mushroom under the full moon, because mushrooms will be wormy. So that is where my idea came from. 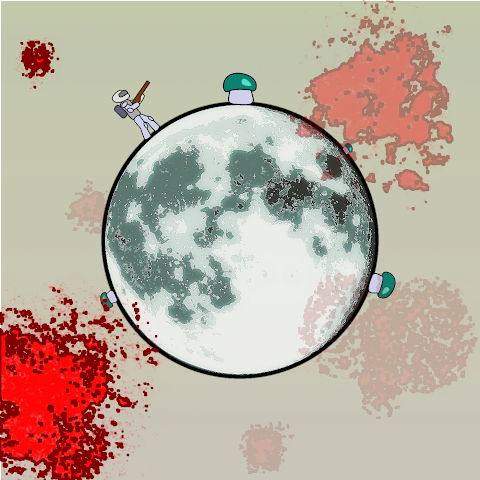 I am programmer and I am not artist, but still I am not happy with it. I think the moon has too many details. And I am particularly not happy with the astronaut and it's gun. I am thinking about repainting him. But for now it will do, because this is gamejam and time is everything. Anyway, game mechanics (just concept -- nothing is implemented yet):

- Player controls astronaut with keys (LEFT, RIGHT or A, D) and with mouse.
- Astronaut can walk around the moon
- By walking through the mushroom he release it free
- Mushroom strarts flying into the cosmos.
- Player must shoot mushroom with shotgun.
- There will be blood for some reasons and/or for some actions I have not decided yet. It does not make sense, but there will be blood.
- I am not thinking about wining/losing conditions. First, I will try to implement this simple mechanic and then I will see.

P.S. Some inspiration has been taken from (http://www.ridiculousfishing.com/).

Day 2 was not very productive. I've scene with moon and one mushroom just flying up. And that is it. I hope tomorrow I will be able to code something more significant.

Day #3: At least some progress

Finally, I have something interactive. You can move player around and pick up mushrooms.

Base mechanics is here. I've no idea how it is going to become a game. You know, like winning, losing an stuff.

And it needs a lot of tweaking and fixing. For example: collision detection changes, when mushroom starts flying; no shooting through moon; astronaut animation and thousand more.

I have almost no time to do something. Around one hour. So, I have done some small tweaks and that is all. Biggest change: now shotgun actually shoots several bullets.

So, I have finished this pyweek's game.

Not very fancy one. It is mushroom hunting game. You go around moon and pick up mushrooms. They start flying up and You shoot them with shotgun. Makes perfect sense.

The biggest problem I've met during this gamejam was me. I've decided to draw everything myself. And I've too much time on working with graphic. I am no artist. Period. I am programmer. So, something like 70% of time was spent on art and 30% on programming.

Result? Result is that game does not have a lot of functionality (But astronaut has small fires coming from gist backpack and boots...).

Thanks everybody for playing, rating and commenting for my game. My game's ranking is low. But it is good thing. I've learned important lesson because of that: gameplay is the king.

During the development week I have spent most of the time drawing art. And somehow I can draw. I think it is the most beautiful thing I've ever done. But it does not matter. Because my game has almost no gameplay. Yes -- it has some interaction. But that is it. Because of bad priorities and because of fulltime job I had not enough time to do actual programming.

So. In this gamejam I've forgot the most important rule of game creation. Gameplay goes first. Gameplay is the king. Other stuff can help gameplay -- but they are not as important as gameplay itself.

Thanks Pyweek and all participants for teaching me this lesson.

P.S. For anyone who were confused with my game's strange endings and strange achievements. Both are random. You need to play it three times to get message explaining it:
https://bitbucket.org/petraszd/pyweek-17-shrooms/src/4912d32de97aa120daceb4ddc1c600ca028c93da/shrooms/cfg.py?at=default#cl-84

It was inside joke. Just for me. I thought it was funny. I still do and I do not care that actually it is not funny at all.