LEFT - to add electron; RIGHT - to add proton; SPACE - to shoot You need to kill as many red squares as You can. P.S. Please, do not hack my highscores server. I know that it has no security at all.

Earlier this day I was walking down the room, flexing my biceps and half-screaming: "I am god of python!"... Because for a while I was co-winner of this pyweek... Thanks for misunderstanding in calculations...

Realization that I am at third place was best ego reducing therapy in last year, I think...

And third place is wonderful too. I remember playing "Mechanism" or "The FInal Huzzah" and thinking: "damn -- my game sucks...".


Things I have learned:

- I not am a god of python...
- Art is important
- The only things I can paint are simple geometric figures
- Music is important
- Do not fear to erase all progress and start over (Dinosaurs and Santa Clauses...)
- It is sad but it is safer (less DNW) to make game with pygame than with pyglet
- pyglet is still awesome
- I have trick you (players) with best scores to think my game is better than it is...

I need to go mobile for sure. Controls are perfect for touch screen. I need to port this game to android and maybe HTML5. I have no mac or idevice -- so no iOS port.

Yeah! My game is working.

It is all over. It was nice trip this pyweek. I hope my game will not crash and all of You will going to find none of bugs I probably have left in my code.

I am starting to think that my game could become enjoyable...

One day to go. Another coding during the night session... Warm rain outside really helps to feel the melancholic vibe...

I need to add music, sound fx, menus, scores etc. In short: it needs polishing, but it looks that I will manage to make something of it. It feels that it may become half-decent small game.

I have added free subparticles (Electrons (-) and Protons (+)) - it somehow makes gameplay more chaotic (mad?) and more fun (at least for me).

Enemies. And You can kill them.

I have added enemies. I need to slow every movement and reduce enemy generation rate.

Currently gameplay and game feel sucks... But I believe I can fix it (at least a little bit) just with reducing speed. I think It could introduce some tactical gameplay aspect.

I will try to test this hypothesis tomorrow, because tonight my eyes are closing down as I write this.

You can make stuff fly away...

... It renders some graphics and it has some interaction (via keyboard), so by definition it is a game. Very, very, very bad game, but game nonetheless...
Video: http://www.youtube.com/watch?v=fnnT01pHrjU
Repository: https://bitbucket.org/petraszd/pyweek-14

I was planing to do this entry with kivy. The main problem - I have never tried kivy before...
So, today I have wasted a lot of time and finally jump ship to pyglet.
What is done:
- pyglet + pymunk

No ninjas and santa clauses this time...

I was half-drunk of thought about me being such a genius last night. Idea about ninjas and Santa Clauses was epic - nobody can argue that. But today while I was trying to paint characters and I understood that I there is no way am not going to make it in time. So goodby my dear robotized dinosaurs...

Art is almost ready (I don't like the color of electrons): 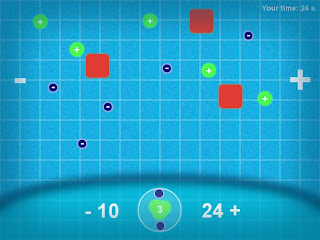 I spent half-day trying to think of idea for this challenge. Below is what I have managed to think of. It is going to be RTS.

Angry Ninjas and Santa Clauses suddenly came from another dimension. They attacked our planet. These sneaky killers... It must be stopped!

The most respective scientists have been summoned to solve unsolvable puzzle: "How to stop this madness?". After a lot lot calculations only one solutions was proposed.

The only hope for humanity is to construct robotized army of dinosaurs. You will be general who will lead this army to defend our planet. You are our only hope!