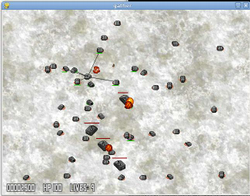 Who can say how it happened? Stray gamma rays, broken neurotronics.... swizzled turbo encabulator? Suffice to say, one droid has gained intelligence and must now reprogram its brethren to destroy the evil overlords.

Gather your fellow workers from across the frozen desert and unite against the big tank like things that shoot rockets!

Robot must DESTROY
Presented by richard


10% respondents marked the game as not working.
Respondents: 26

Energized: The Game (is not a name that any other game uses)

This is my first entry to PyWeek and really (what I hope will be) my first complete game. You have to start somewhere...

I'll probably be hosting the code somewhere at code.google.com or through a bzr repository on my site (adambachman.org). My development platform is an Ubuntu box with a 1 GHz AMD proc and 256MB of ram, so I plan to run light and fast. Here's to hoping...

EDIT: I wasn't aware this would be posted to the main pyweek feed. Feel free to ignore it.

done, checked in, time to make the coffee.

I'm super intimidated by the work of some folks here, but 'tis all in good fun and I made a game I like, so there :)

It's not everything I hoped, a lot of laziness went into making this one (the good kind). No hand created art, no self recorded sound, just a lot of bleary eyed coding sessions trying to make eight direction geometry work in a trigonometry world. It's fun enough that I come back and play it, and my QA team (three-year old son) agrees that it's a "good game daddy".

Top-down 2D shooter with a twist. Think Asteroids, except the asteroids shoot back. Better soundtrack, too.

Good luck to all, I look forward to playing every game (even the DNFs) once I've had enough sleep and/or coffee to be rational.

Next time: a team (perhaps); better adherence to the "eugman challenge" or equivalent constraint subcategory; start with gameplay, finish with graphics; and actually write a few warmup games before the week begins.

Wow, I'm honored and humbled by the responses to "gather". I had fun and will be back for sure. The pyweek upload system is giving me trouble, so if you want the most recent versions of the game (the post-pyweek release) at my personal site. There really aren't many changes. I fixed the level-end crash bug and added survival mode and a conversion animation so the moment of conversion is a little more obvious.

On with the postmortem...

What I think went right:

All in all, I enjoyed it making and playing the game, and I'm glad some other folks did too. I hope to do a small set of tutorials while pulling the game apart and re-writing most of it. At this point I can't imagine adding features without coming at it fresh. I think there's potential here, but I don't envision turning this into a power-up heavy 2D action shooter. I like the design constraints of a five-minute casual shooter, so I think whatever changes, it'll still be pretty much the same game.

Huge thanks to Richard and everyone else involved for keeping pyweek rolling, I look forward to 7!