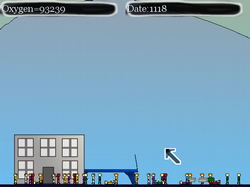 I didn't work much today, not a lot of time and don blake wasn't here, but here is a shot showing the carriers carrying supplies to the ship construction site. It also shows the now-visible headquarters.

Century of the Fruitbat Moving Picture Publishing Company - with 1000 elephants


2% respondents marked the game as not working.
Respondents: 39

To a network cable near you

Experience the likes of which you may have experienced many times before, and yet will never have experienced in nearly exactly the way you will soon be experiencing, in April, when the 4th pyweek kicks off and then ends...

Century of the Fruit Bat is proud to present...

A preview of the preview that is to come...

Amaze yourself, when 1000 elephants will soon fill your screen!

When the dark heart of betrayal strikes you in your gut...

When everything you know has been turned on its head, making you spin into a dizzy nightmarish trance of despair...

When everyone you care for kicks you to the curb like a world-class soccer player going for the winning goal...

This, is when you know you've hit rock bottom. Your one solace is the realization that it can't possibly get any worse. And so you steel yourself against all odds and resign to survive the ordeal. Because you know that at this point, the only way is up!

(ad paid for by Harga's House of Ribs - if you miss out on Harga's juicy ultimate rib platter (tm), you may as well go hungry)

Century of the fruitbat rolls along like a train going at 3 mph. Ok, so we have no game, only a vague idea of what we are making, and are days behind the other teams. But I can assure you, the quality will win out in the end. I think. Anyway, feast your eyes upon the amazingness that explodes from our work so far, culminating in this stupendous visual reflection of the begining moments of our wonderous game, which has thus been titled, "Up Up and Away".

Amazing, huh? If you don't beleive me, then just remember, 1000 elephants. What more could you want?

Our version of "wow, we have a title screen"

You can download the entry here: http://media.pyweek.org/dl/4/cent_of_fb/upupaway-0.1.zip although why would you want to? It just fades up and isn't all that interesting. The graphics engine is mostly complete, but there is nothing to prove this point. So you'll just have to imagine a million sprites running around and pretend that there isn't a framerate hit.

This is Century of the Fruitbat signing out.

Century of the fruitbat is proud to announce the moment you have all been waiting for - the very first super special early release trial of our wonderous crowning acheivement "Up Up and Away," starring the stickmen performance troupe and paid for by your favorite restaurant in the multiverse: "Harga's House of Ribs". You know you want some.

The link for this amazing masterpiece is located below, but as this is a special early preview version, we ask that you keep it secret - we don't want to build up hype too much yet.

secret link, don't click unless you belong to the fruitbat secret society

Friday night - possible final entry of UP UP AND AWAY

Final (beta)
After much work and much laughter at all the silly aspects of the game, we have put together something that can actually be played and completed - if you are extremely lucky AND know exactly what you are doing. The readme gives a good description of the strategy to win. Bandits are the most annoying feature ever, but they are funny the first few times they wipe you out.

Many more features we want to add, but will probably be cut - we'll see what we can do tomorrow.

Before voting on the game, please either download the one-line fixed version here: cenf_of_fb_0.99.zip
or make sure not to click the launch button while people are on/waiting to go on a mission.

We had a pretty good time with developing this game, but not nearly enough time to do all that we had wanted to! There will certainly be future versions to come.

IF THE LONG TUTORIAL SCARES YOU OFF:
The game isn't as complex as it seems, you should be able to figure out how to play from trying stuff, and the people are pretty fun to watch for a bit as well. The general idea is: make units on the left screen, send units in groups to find resources on the headquarters screen, and wait until you have enough resources to launch the ship. It's much simpler than the somewhat clunky interface makes it appear.
In fact, it's hardly a game at all!

I'm impressed with a lot of the other entries, so impressed that I'm going to hold off on voting until I've played through a lot of them till the end. It would be very easy to distribute the top score to too many games and not have a good enough range of scores.

Good job everyone, I hope you can get over the scary tutorial and enjoy "Up Up and Away" for what it is: a fun little toy simulation that only gives you as a player a minor effect on what's going on.