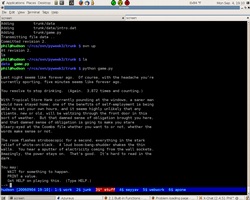 Screenshot of the start of "The World Dissolved".

A Pyweek 3 entry by Phil

An interactive novel about the disappearance of a young girl. Warning: adult language and situations.

Some of you may be familiar with NaNoWriMo. The idea behind that particular form of insanity is to write a novel in thirty days. Having started (and never finished) a rather loathsome number of novels in my life, I decided to try NaNo two years ago. I managed to write a 110,000-word novel. A first draft, but still.

In both cases, the feeling was ... almost indescribable. To be able to look at a finished work, unpolished (or crap) though it may be, and say, "Hey. I did this. This is from me." ... Something about the creative process, the completion of the creative process, makes something primal in my brain do the brainial equivalent of rockin' out. (I'd say that maybe it's just me, but looking at the list of repeat offenders in the entries both here and at NaNo I have to believe that at least a few others have experienced this.)

I've also been starting (and never finishing) videogames ever since I was 6 and received an Apple //c for Christmas.

Perhaps the pressure of PyWeek will be the motivation to get off my butt and finish one for real.

I don't plan on having any graphics in the game. And the code is already horrid, barely an hour or two into my starting. Ah, well. I've been meaning to write some form of IF for ages, and it looks like this is going to be where I do it.

Another plus: I suspect that there will be very low system requirements to play the game.

I just uploaded the current release of "The World Dissolved," which just contains Act 0. Which is, of course, just setup and the like. Not that there's going to be a whole lot of interactivity in the end, mind you. But this will give you a taste.

Thanks to richard's help, I have a much cleaner organization for the code here. That may seem like a dumb thing to do during a time-pressure contest, but previously everything was in one single massive source file. As the world grew, that got worse and worse to dig through.

I've cut a new release, available here, although it has very little in the way of additional text. The entire 'marsh' scene is implemented, though you don't really learn anything from it (unless you're psychic and can intuit the storyline from the minimal list of actions).

I've also added hooks for running things when you enter and leave rooms, which actually allows for more game-like things (randomly providing exits, having actions change depending on the direction from which you enter, etc.) Not sure how much of this stuff is going to get used, but I think with a little more work this framework could actually be used for a minimalistic 'interactive novel' engine. I am using it to determine whether or not certain actions are available, depending upon what you've done before, so there's actually a game-like quality to this that wasn't there in release 0. That's a plus, even if most people might not notice it.

I just cut release 0.02 of my Pyweek entry. It has two major new features: The last was amazingly similar, thanks to cPickle. Python rocks.

A release candidate for "The World Dissolved" can be found here. I'm going to try and get some testing done to make sure it works to everyone's satisfaction.

There are two endings, just in case you're wondering if the game is completely linear. It's not. Honest.

Pyweek's been fun, but also very stressful. That said, I look forward to next time. Perhaps working on a team would be easier ... I have no idea, to be honest. It was nice to get some writing done before the coming NaNo, though.

Thanks for hosting and running this, richard!

This is v0.10 of "The World Dissolved." A friend tested it for me (thanks, Mandos!) and found that you could redo something you shouldn't be able to. It came from a change in the plot when I was writing it. Anyhoo, fixed. Enjoy!

End of "The World Dissolved" in Windows

For those of you running Windows, you may want to run it from a command line before finishing the last area (the return to the marsh). If not, you'll miss the breakdown of how you did at the end. Sorry about that; I totally forgot that Windows automagically closes the window after the application finishes running.

Thanks, everyone. I ranked about where I expected--lower than I wished, higher than I feared. I know that "Dissolved" was barely a game; there are very few choices throughout Act 1, although a lot more were planned. I blame the time constraints of writing a working text-based engine and oodles of text to go with it in a week.

To my utter shock, I realized when looking over the scores that my game had the highest Fun ranking of any of the single-player entries! That gives me a serious warm-and-fuzzy. Perhaps if I team up with someone next time and do the story... not to mention actually giving people real choices. (Although there are some; did you have Pearce with you at the end?) The low Innovation and Production scores are totally justified. I'm surprised I didn't get more 1s across the board.

I found that stupid "still dark when the lights are on" bug, and it's fixed in the SVN repo. Thanks, and sorry about that!

I hope to see many of you doing NaNoWriMo this year. It's like Pyweek for novels. I'm Phil there (surprise!) ... drop me a note. And I'll be back here next time around too.

(For those who are wondering why I didn't do colour and the like, there's a simple explanation: It doesn't work in Windows. The ncurses library ain't there. Sure, I could have written some sort of Pygame/sdl_ttf based engine or something, but ... ugh.)