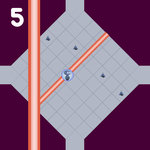 A Pyweek 21 entry by Tee

As the last awakened robot, you witness the aftermath of your peers trying to escape the laser-trapped rooms of the Facility. Can you achieve freedom?

Thanks for rating my game up to first place in the solo category! This was surprising: I meant this game to be just a short experiment given the little time that I had. I'm glad most of you enjoyed it!

The previous iteration was actually 2D. I decided to take away one dimension because the laser would end up forcing you to run the shortest distance anyway, and I wouldn't have time to implement obstacles (which was in the original plan). That's also why the room is rotated 45 degrees. :)


"I wish it was a little more forgiving. I died on level 8 and had to start all the way back over like 15 times. Finally beat it, though! :D"

"Honestly, I gave up trying to beat it."

"a bit annoying but it's the point of the game"

"It's a little frustrating. When there's enough debris it's indeterminate where the beams are. And you're reset back to the beginning when you guess incorrectly. The isometric nature the player sprite makes it really hard to tell where you are in terms of the beam grid."

"The game's fairly frustrating. [...] I understand the reasoning behind the reset-to-start aspect of death, but the punishment was more frustrating than anything. Maybe have checkpoints every 3 levels or so and increase the number of levels, so the challenge doesn't drop from 100 to 0 with each death. [...] Maybe a bit unfair in the later stages, but I suppose that's the point."

"It's quite hard to beat this game, I gave up after a few tries."

Ok, I see that the game is clearly too difficult. Sorry about that. But hey, some people beat it, so kudos to those who did. :)

I was in the last hour of the challenge when I playtested it, and I wanted it to be challenging but beatable. It's always hard to balance a game and I may have made it a bit too hard. I personally enjoy challenging games, so I tend to bias a bit to the hard side. My reasoning was that in a game as simple as this one and with quick restarts, it might not be too bad, but I guess I overdid it.

There's a tiny bit of strategy to this game that might be helpful. This is both a guessing and an observation game. One piece of advice is to realize that there are 6 tiles, so 6 possibilities where the beams can hit. I also find it useful to keep in mind the number of beams per level: between 1 and 4, according to the color of the background. For example, in the levels with 4 beams, you know that likely only 2-3 tiles will be safe. And if I realize that I've already spotted the number of beams, I can speed through the rest. Or, in the later levels, if the beginning is sparse, then I know that the end will be full of lasers and I have to be more careful, and vice versa.

"at the end is playable but quite repetitive"

"Anyway after two level is starting to be boring and very hard to beat. It needs other elements to improve the game experience."

"Tends to get a bit monotonous quickly and loses replayability"

Definitely. I meant the game to give you only a few minutes of fun (hopefully), not more than that. :) Maybe if I had time I would have extended it a bit and made it more interesting.


"I wonder if the levels would have been better if they were more designed as opposed to procedural? But not convinced."

In a more complex version in this game, you're probably right. But procedural levels took much less time to implement, and also, in this simple version, I think if they were designed, it could take away the little replayability the game has. That's a good point though!


"It took me a while to understand the gameplay"

"took me a few attempts to realize how it all worked"

"But still, was unable to understand how to play."

I'm not very good at making it clear how to play my games, even simple one-button ones. Sorry!

On the other hand, I feel like it's part of this particular game dying a few times to realize how the game works. I intentionally didn't tell you how the debris relate to the laser beams because I think it's fun to figure that out.


"I think having the lasers fill the entire squares instead of that thin ambiguous line would've helped with legibility of how far I can actually sprint."

Good point. I kind of like it this way too though, because it allows some room to do tiny sprints between consecutive lasers that "expert" players can do (if there's any concept of "expert" in this game).


"The poor robot; what did he do to deserve being repeatedly lasered"

Haven't you wondered why you see no humans in the facility?


Thanks for your great comments! Congratulations to the team winners and thanks to blakeohare for organizing this Pyweek! See you next time!

Due to life, I was only able to start Friday night this Pyweek, so I went with something very simple. Beam is a one-button runner-type game where you have to avoid traps based on the aftermath of other escape attempts.

I went through three iterations of decreasing complexity to get to the game I submitted, so I started over almost from scratch twice. The first iteration was a puzzle game. I scrapped it because I felt was too difficult to generate levels in the time frame that I had. The second iteration was actually very much like the current one, except that you'd have more freedom.

It's a simple game and it should take only a few minutes to beat it, but I hope it's enjoyable.

As always, congratulations to all who have finished their games!