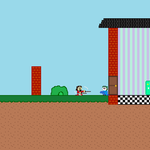 You play as a hapless custard pie enthusiast whose house is overrun by clowns. You simply can't let them in here! Protect your pie from the intruders at all cost.

Camping the pie...
Presented by gummbum

Ok, this was the theme I was least hoping for. Still, lets see what I can do...

Second day. The initial pandemonium of where to start is past. Yesterday I started on a level designer, some graphics and the basic mechanics. I might soon have something that will be worth uploading. The basic idea of the game I settled on is that you are a reclusive man trying to keep something out of your house with your swords! Naturally the thing you are trying to keep out is a clown :-) This will be a fairly straightforward plat-former puzzle game with maybe a time element.

Almost all the game-mechanics are now working. I'm slightly lacking in terms of levels, but what I have is actually playable. You are able to jump, move objects around to overcome puzzles and attack enemies. All I need now is win/lose conditions and some way to tell the (fairly simple) story.

Ok, the game is playable. Hardest part done. I got a few friends to demo it and they seemed to enjoy it. It still needs a lot of polishing and definitely at least an intro and some credits (the most important part). Let me know if you've played this bare-bones version, if you liked it.

That's it; I'm done for this pyweek. I'm fairly proud of the end product. I had a few small touches I would have liked to add, but there was not enough time between everything else. I hope you all enjoy the game as much as I enjoyed creating it. I gave it to some friends to demo and apparently it's quite hard, so good luck!