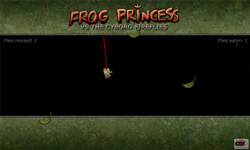 Frog dangling by its tongue, some leaves falling and stuff. Quite close to the final.

Frog Princess VS The Cyborg Fireflies

Catch the fireflies and watch out for their death rays!

Wow. I honestly wasn't expecting this theme to win. Sawn in half was my favorite. This means that I don't really have any concrete ideas for a game at this point. Maybe something to do with stealth... watch out for Metal Gear Solid Python! ;-)

I hate this. We've got a good plan for our game. I'll write about that later, but currently I'm just bumping into technical problems. Well, for a start I was planning on using a richer library than pygame to start with. Pygext looked good for this purpose... but then plans changed and I realised I'm really going to need a tile engine, so I switched to pgu... only to realise that I'll need some lighting effects... figured that sort of thing would be better to do in OpenGL, so I made my own little rendering hack for pgu... but seriously, I'm not too experienced with OpenGL and I can't figure out how to do lighting in a 2D scene. Basically I would like to assign each pixel on the screen a lighting value. Tried to blit a fullscreen alphablended "lightmap", but that's too slow... I guess I either have to find an alternate way to do that or try to optimise it to work on single tiles instead of the whole screen. Then I might get away with not updating the whole screen all the time, which would be good. I'm going to give lighting effects a rest for now and try to implement some gameplay instead. Any tips on doing 2D lighting effects, OpenGL or otherwise, would be appreciated.

I guess we're making some progress. It's a bit slow though. There's a basic platform game engine, and there's the ninja rope functionality (as seen in attached screenshot), although these two aren't very much integrated together right now. The game is supposed to become a sneaking game starring a frog who can swing by his tongue, using it as a ninja rope kind of thing. His enemies are glowing cyborg fireflies. The player needs to avoid any sources of light including of course the enemies. There's still almost two full days ahead. I think we can still make it if we make the most of the time we have. I'll try to make another diary entry with a more interesting screenshot later. If I don't, that just means I'm busy finishing the game. ;-)

We are nearing the deadline, and decided to change the game's concept to a slightly simpler one. We still have some debate about whether we'll try to include death ray weaponry for the enemies, but we agree about the overall idea of the game.

The Frog Princess is hungry.

I even did some real graphics work today, and thus, we have a new screenshot to show. The game will probably be called "Frog Princess VS The Cyborg Fireflies", or more casually just Frog Princess.

Hi, I wanted to make an update this time too :).

The music is done, maybe except for some minor changes. The style is a bit similar to Trip on the Funny Boat (if anyone remembers), but you could call it somewhat mysterious. I think I'm pretty pleased with it, though I can't say how it fits the game.

I always have the same problems when writing game music. For example, the music shouldn't have too much repetition but not too much variation either so the atmosphere doesn't break. Also it shouldn't steal the player's attention from the game but it shouldn't be boring in any way.

Another problem is that when you've listened to a song for three hours (which it took this time), you won't love it, no matter what. Actually, you get so numb that it's hard to judge what's good and what's bad. So you can only guess what other people may think of it. This time it was especially difficult because the music is somewhat repetitive, in a good way, I hope.

Bad news is that Hectigo has become ill. Because I'm not a coder in this project, I can only hope everything will be fine (the game isn't very playable yet) and help with testing and game design.

The end is drawing near, and I think my head will explode any moment now. Placing really well last year has created some pressure, and I don't know if our game meets expectations. I can say that I like the music though, and am pretty pleased with the overall feel of the game. I just hope we'll get everything ready in time. One can do wonders in one hour.

We finished the game on time. The last couple of hours were pretty hectic. We managed to add highscores and death rays (actually paralysis rays, but "death ray" sounds cooler) during that time. Most of the game was made in the last two days. We weren't making a lot of progress earlier in the week, so we realised that we can't make the game that we set out to make. We changed our plans and finished in time.

Frog Princess VS The Cyborg Fireflies is a game where you play the role of the Frog Princess, and you are hungry. You must catch the cyborg fireflies with your tongue. The fireflies are clever though, and they disappear from sight very quickly, so you must use your ears to catch them. You have to be quick though, because the fireflies are cyborgs armed with death rays! (which paralyse you for a couple of seconds... kinda like death) You can manouver yourself using your tongue as a grappling hook. Don't spend all the time dangling around though, because you can only afford to miss 5 fireflies before the princess starves (she's very hungry). Catch 12 or more flies to enter the prestigous Princess List.

It seems like a lot of people miss out on a feature in our game that makes it a little easier. When you're trying to catch a fly, you only see it for a second and you might lose track of where it is. That's where you need to use your ears! You will hear the firefly buzzing when it flies closer to you, and you should hear the sound move from side to side. I recommend using headphones for the best stereo effect. This should help you locate the fly and catch it. One method is to wait until the fly is almost right above you and then shoot your tongue straight up.
I hope this makes our game a little easier to play. :-)