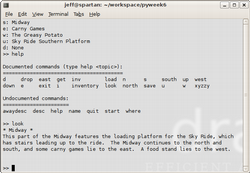 This time I plan to be a bit more ambitious. Try some new libraries, learn a few things, and make a sweet game! Love the PyWeek!


12% respondents marked the game as not working.
0% of respondents wished to disqualify the entry.
Respondents: 14

I wanted to try to make a point-and-click adventure for this pyweek, but I think I found out by the end of the first 24 hours that the graphics necessary were just too difficult for me to even attempt. But I decided I could put together a nice text adventure that would be just as fun (maybe more fun). And besides, I've really been into using Python's cmd module lately (command lines are hot!).

I have a lot of the game logic complete, but it's mostly the basic text adventure stuff (movement, inventory and object handling). I still need to create the game and write the logic for non-player characters and object interactions. The whole game is stored in an sqlite database.

I think I'm also going to include a walkthrough for people who want to play through the game, but don't want to invest the time. Seem reasonable?

Today I finally got the game editor (and game, actually) functional enough to start entering rooms into the text adventure. The editor actually is the same as the text adventure game, but adds a few commands, like name and desc, to allow the entering of rooms into the game database. Also, if you move in a direction where a room wasn't already present, a new room is whipped up for editing.

There's still going to be some nasty SQL work to insert a few more details, like non-player characters. Also, since the game isn't necessarily a grid, some rooms will need to be manually connected in the database.

A little behind schedule, but definitely moving forward.

I finally got loading and saving to work. I have the most inefficient but foolproof saving system. The game is stored in an SQLite database, and the database is modified during play. For example, if you pick up an item, it creates an entry in the Inventory table and deletes the entry from RoomContents. So to save the game, the system creates a complete copy of the working game database wherever the user wants. The system essentially copies the entire game to a new location. This is obviously inefficient, but the game db measures less than 100kB and the trouble of saving the states of multiple objects is completely eliminated.

Now I just need to finish interaction with two characters, write the ending and intro, and package it up! Hurry, hurry!