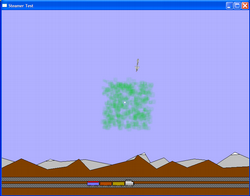 we have trains now!

A small group of people from israel trying to build a little game with steam-shaping action.

Rating and comments - Thank you!

After the results have arrived, i am really happy that i found time to rate every other game:

It is true that i didn't get the score that i could have get if i did certain things differently.
BUT - The comments that i got were very very helpful and now i learned what was missing for other people to understand this game more quickly.

Now (as in "a week or two from now, when i find time") i can and will fix the game according to the comments i got here and the things i wanted to do but didn't have the time.

I hope my ratings of the other games will benefit them as well, and (again): Thanks for spending time and writing those comments!

what's the game about

i don't have much time to write too much (maybe we'll have friday-saturday to write the code) so here is the idea for our game (email format, read from the end, up):

after talking to you today, i came around with the following (surprisingly it matched your questions):

1) tough question, but i thought about it a little:
for every 'pixel' in the target picture, compare it to the color that is there. while painting, the steam will move it's 'centor of mass' to the center automatically.
yes, it will be a complicated algorithm (the whole thing) and that's why it would be fun to do it.

2) i had in mind two gameplay modes. in the first, the mouse will smear the particles (like kai power goo) or something similar. in the other, the mouse will change its direction (like worms 3d. remember?) and will shoot out air (or steam) from its end (with a miniature gun barrel).
i guess the second one might be easier to implement.

also, i want the whole game + interface will be completely without text. the rules should be self-understandable.

i have a little design in my head of how the code should be separated into several different parts, but that is not important at the moment.

anyway, good night and send me more questions about important details that are not thought-through (: like how the particle simulation will be. and the shape comparison. and stuff.

sorry for the unclearness of the text..