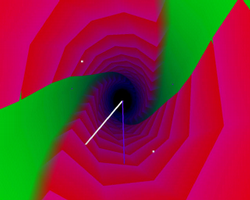 got avathar and hud. twisted!

Take a little from old good games mix it with the new and innovative game play serve with good graphics and sound. will try to use OpenGL. but we will see. never finished a game in one week though.


66% respondents marked the game as not working.
0% of respondents wished to disqualify the entry.
Respondents: 11

OK i have thought along time now. Should i Use OpenGL or should i use OGRE? OGRE has its benefits, but i don't know them. I´m familiar with scengrafs but i worked a lot now with GL and if i would want simple scengraf features i could implement them :P.

So OpenGL it is!
What i don´t got though is a good way to play 3D sounds. I think I´m striving for a 3D arcade like game with low model detail but high texture. A good feel of presence in a abstract way, no human avatar.

Do the Python comunity want it?

As my previous post shows I'm probably gonna implement a really simple scene graph that is structured close to OpenGL. The only things it will support in the beginning is Tree Structuring objects with node translation/scaling/rotating, Cameras and hopefully a util library for simple collision detection and translations between coordinate systems (spheres and cubes) .

my question is: is there any interest in a python written lib for this? or is all that already handled with libs like pyOGRE.

sometimes i feel comfort in libs written in python. wrappers are not as good in representing the language, and you can feel lost. I used once OSG (Open Scene Graph) but with wrapper in Java, that was a horrible experience. Is pyOGRE a good wrapper?

If there is interest in such a library pleas use this thread as a wish list :D.

Ho boy this is Twisted

First day in madness. A really weird day, slept eaten and programed as if there where no sign of night and day.

I have accomplished some thing at least. I can draw my polygons and create new. My collision detection is figured out but some bad programing gives recursion overflow. :(.

My game is as simple as hard. The goals are not clear at this point. But given a grooving set of convex polygons are you suppose to fill the area of a imaginary sphere, its really a warped plane swept around the sphere, by twisting and turning them around.

The area of all polygons are summed and given in energy which will be used to create new polygons and or killing badies whom are trying to destroy your polygons.

The difficulty level of the game gonna be decided by the are of the polygons, d the area of the sphere and badeis growth.

I can't sleep. Why? I don't know! But what i do know is that i will not be able to finish this game with all the work load alone. not this week at least.

So what to do? Abandon my holy quest? Not me! The hours I have been laying on my bed trying to sleep has not been in vain. I come up with a new game idea. This one don't need any heavy collision detection, which was the problem with my old one.

The new game name gonna be "Twist'n Boost", a race game in a tunnel which you almost not fit into which is twisting a lot. You control the rotation of the craft and the angel between its wings/wheels. When you think you can handle it use the boost to win some time. The boost maybe will reward in some other way to in the end ver.

Is there any way to write text on a gl pygame surface?