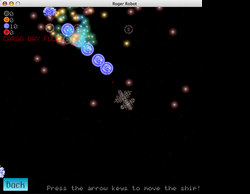 Inventory works, and when your cargo bay is full, it lets you know, and won't let you pick up any more resources.

It's not worth doing, unless you're deemed red.


7% respondents marked the game as not working.
Respondents: 26

Here's the mac version of Roger Robot Beta 5 with all dependencies included. It's supposed to be a universal binary, but I don't know if the PPC parts will actually work. http://software.cpufreak91.net/games/Roger-Robot-Beta-5.dmg.

In our scramble to get a bug-fixed version of Roger Robot up before the end of the challenge, we overlooked one bug created by fixing another bug. This bug is only present when you start the asteroids-like mini-game. There's a 1 in 7 chance you'll get a crash, so if you do, try playing it again. :)

There's also a crash that happens when you play the asteroids game and click on a planet that doesn't have any dialog set.

If you'd prefer to spend your day shooting asteroids and getting resources without the possibility of a hapenchance crash, you can get the bugfixed version from: http://software.cpufreak91.net/games/roger-robot-beta5.zip

The game also has an unfinished part, the trading screen, where you can buy stuff with 0 cash, but can't sell :D
We would have added more dialog and unlocked more planets if time allowed. :(

... on the last day of development. We've got less than 12 hours to go, and while much of our framework is done, it's going to be a rush to get all of the RPG content into the game.

So to distract you from our risk of not completing a game, please enjoy this shiny new screenshot! :)

Good news:,
We've had some great progress, and ticked off a number of our milestones!

Bad news:
These are milestones that were slated to be hit around Wednesday, and it is now Friday morning.

The (not very) ugly:
I'm thankful to have some talented artists working with us, and here's a (functional) screen that we've got going on:

I'm the guy with the gun:
Out working the asteroid fields:

Where do we go from here:
Further up and further in! We're trucking along, blessed with some very talented developers, and we're all learning and getting to know each other better. Who could ask for anything more? :)

Sorry for the vagueness about all of our features and storyline -- I hope you all will enjoy playing our entry after Saturday. We're doing our best!

And to all the other behind-schedule devs out there -- keep your chin up! We're struggling right along with you -- another day-and-a-half -- let's make 'em count! :)

Well another exciting Pyweek is coming up! We're planning out goals and throwing around vague generalities of ideas, planning roles and psyching ourselves up for the weeklong rush of caffeine and adrenaline.

Richard, thanks for putting this on again! How is the Skellington for this season's challenge? Are we aiming to have py2exe functionality working? Anything we can do to help?