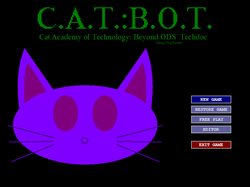 The ODS (Omega Dog Society) was able to develop Techdog, a robot designed to serve humankind and bring the "human heart" nearer to dogs than to cats. This of course is a great threat for catkind as we know it! The CAT (Cat Academy of Technology) thus developed their own robot, called C.A.T.B.O.T..

The developement of this robot is now complete and the first prototype is ready for initial tests. You were chosen as programmer to help C.A.T.B.O.T. developing it's own basic decision algorithm by monitoring how you are solving different tests.

Will you succeed in creating a C.A.T.B.O.T. with capabilities beyond ODS' Techdogs'?


5% respondents marked the game as not working.
Respondents: 33

Looking at the ratings for all of zK's Pyweek entries, I'd conclude that our games become more innovative while production goes up and down. And with each Pyweek we make less fun games! ;)

(Ok, you shouldn't compare ratings from different Pyweeks, but it's fun to speculate about the quality of our (hypothetical) next game.. Less fun, more innovation and better production?))

I guess logo-like games arent't for everyone (especially after one week of programming? ^^), so I'd say we did fine this time. Now, to summarise Pyweek 6 for us:

A new version of C.A.T.:B.O.T. (with less bugs) and a Windows .exe will be uploaded soon..... All in all, we had a lot of fun and we really enjoyed playtesting the other games, too. Mostly. ^^

I could list all the stuff we want to do/learn until next Pyweek, but that would be exactly the same as last time. Maybe we'll get around to it this time.. The only addition would be that we shouldn't do another puzzle-game next Pyweek. We already have three - it's about time to try something new. Anything.

So, thanks and hope to see you next time!
-Serval

PS: Btw, our game was indeed inspired by a mini-game in The Lost Mind of Dr.Brain.

We have a final entry with nice graphics, sound effects and music. And it's playble, too. Apart from some bugs, of course.. Zahme played through the whole game for 4 or 5 times to find the worst bugs and I had to spend most of the time fixing them (instead of making nicer music *sigh*). I really hate the code but at least it works ok. Hopefully. And if it runs on all machines (that have Python and Pygame installed) I'd be happy.

Good luck to those teams that are still working on their final submissions. Keep going! We want to play your games.. ;)

Quick wrap up - HUGE progress was made. The game is mainly complete and what we urgently need to do is TESTING a lot.

Story is complete, Levels are complete (25 in total), Functions are all implemented as expected [only one-two missing]... if all goes well we WILL finish this entry before deadline closes in - but as it looks now, we will not get all items included that are left on our list.

What is missing?:
- Sound (! - urgently need to find some good sound files..)
- Music (? - it is planned, but we need to find enough spare time to compose it)
- Implementing the written Story
- Drawing a medium sized window for text-messages
- Drawing a bigger image as "Game Over"-Screen
- Activating some functions that were implemented, but deactivated for testing

So... Good luck to the other participants - We're eager to test your games, but for now: Hopefully we get all those last tiny things done that are missing [looks like no sleep for us today ^^")

P.S. New Screenshot is up - finally the Title Screen is revealed - as per tradition there will be no more screenshots after the Title Screen, so sorry for no ingame shots ;(

We will partially skip this diary entry today, as naptime is already overdue..

Much progress was done, except for some minor things the game could be considered ready - so we will just call it past-alpha-pre-beta-version... tomorrow gameplay will be tested, last images will be generated and everything will be polished - and sound/music, maybe, ... hopefully...

Day 4 - Half of PyWeek is over

So - where do we stand now?

I was able to create two new characters with simple animation (those of you who tested our PyWeek 4 Entry might already know those two fellows). Also I generated a lot of levels today (about 17) and I will try to complete up to 13 additional levels until before naptime ;o)

Serval improved level loading, items in the interface and also added some new things to the interface. The game looks quite good now, but sadly up to now we just did limited tests on gameplay - so we will need to devote some hours in the future for testing the game to it's heart [I have the fair that the game might be too complex in it's kind)...

Left ToDo's for the rest of this week:
Art:
- Intro-Screen
- various images in various sizes (still there, maybe I do it tomorrow - I should work on it on Friday)
- help-screen(s)
- Messageboxes for Tutorial & Story

Other:
- README
- Writing Dialogues/Story
- Music (? - have to see how much time we have at the end)
- Sounds
- Some more Levels (have a good bunch, but some more would not hurt)

I will just keep this one short :)

Serval was able to implement level loading today and currently struggles with implementing different functions behind different fields, while I created some new images. From what it looks now we are performing well and it might be that we will finish this game within the challenge - but we should not overrate our current performance ;)

*was not able to prevent himself from (again) adding C.A.T.B.O.T. to his post* - let's just call it a compensation for our todays missing screenshot, k?

So, Day 2 is over; let's just wrap up the important things:

So as you can see not much has changed since yesterday - Gameplay is still completely missing, but hey: we nearly completed the whole interface and I (as non-programmer-but-artist) expect that implementing the gameplay should not be *that* hard within the next 5 days.

And after all, we still were able to create C.A.T.B.O.T. XD

Again, it's finally PyWeek time! Robot's the theme that was chosen and we can live with that (though shuffle was our #1 candidate). We will stick to our original idea for this theme [and as far as it looks now, nobody else got the same idea as us - but well, robot ist a veeeery general theme] and made some "little" progress today.. (despite that we did not come out of bed until around noon)

Art: Interface with a lot of buttons and some tiles.
Code: A lot of functions that will later be linked to the buttons were created by Serval - she also started to get this "apathic" look of a zombie programmer again o.o. She currently struggles with a subroutine we wanted to add - seems to make more problems than previously expected.

It does not seem to be a lot, but it is quite a good start - especially as the interface will be the thing the player will see all the time. Nevertheless, there are still a lot of things to do..

ToDo - Art:
- A lot of ground/item tiles which will be used for the level design
- some additional buttons (about 4-6)
- One Splash-Screen
- Title-Screen
- multiple images of various things in various sizes (very vague expression here, beware!)
- Ohter things not captured by the above


So... that's it for a first day in the new PyWeek challenge - a rather calm start and from what are the looks now, we probably will get a decent game done until the challenge ends - if it will be the whole game as planned is hard to tell, but it nevertheless will (hopefully) be enjoyable to play.

Good night and have fun in this competition! - And hopefully there are some more screenshots from your games available tomorrow [if possible more descriptive ones than our screenshot ;)].