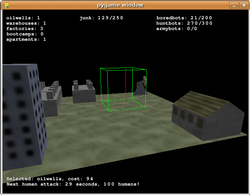 A Pyweek 6 entry by wybiral

Build your colony of rebel robots up to defeat the humans!


33% respondents marked the game as not working.
Respondents: 12

Well, this is it, my final submission! I didn't quite get to implement everything I planned, but it gives you a pretty good impression of the game. I had quite a bit of trouble tweaking the values to make it playable, so it gets a little hairy as you keep playing. I tried to explain everything I could in the README.txt, so be sure to read that first. Pressing F1 during the game will also show you the keys used to play the game.

Nothing left but gameplay and tweaking...

Well, I've got most of the hard parts worked out: a simple in-game editor, a VERY crude GUI system (it's laughable, but for a one week challenge, it's not too bad), and the basic elements of gameplay. What's left is mostly going to be refining everything and working out some of the gamelpay details (having to find the right values to make the game fun and still challenging is proving to be the hardest part). There wont be too much in terms of a battle system, but that's something that can be worked on more after the challenge (who knows, with some other tweaks and some migration to server code, this game could also be made multiplayer!)

I've spent most of my PyWeek time today writing a fast OpenGL console (mostly for testing, I'm currently shopping around for a reliable library to do this for me) and getting some of the core gameplay implemented. Now you can build factories, oil wells, and warehouses using "junk". You can hire "huntbots" to collect junk (hiring robots means turning "boredbots" into whatever type of worker you need). Factories produce "boredbots", oil wells produce "oil" which robots require (some types require more than others). The amount of "junk" you can store is dependent on the number of warehouses you have.

Unfortunately I didn't get a chance to get anything done yesterday, but hopefully I can make up for that today. My best idea as of yet is to go for an RTS-style game. My idea was inspired from an episode of Futurama where there's a colony of rebelling robots who need lug nuts.

You will be building the robot colony and managing resources (hopefully there will be some element of "war" via attacking humans, but the game won't be centered around battling but rather around building). It's not going to be a "move your troops around" type game, but more of a "manage your resources and buildings" style (like sim-city).

I hacked out most of a crude engine this morning, hopefully I'll get a chance to get something uploaded tonight. I'm using PyGame and PyOpenGL for all of my rendering and blender to model some simple buildings (using "obj" loader from the PyGame recipes to render the models).

This is my first time trying to rush a game out like this, hopefully I don't waste all of my time on support code (the engine / math routines / etc).

Here's a shot of a "stand-in" (until I get better models) robot factory!