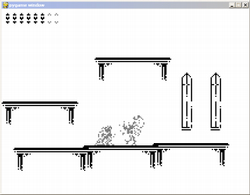 Player is in a "just slashed" frame and the enemy is dying, player health in top-left corner

Oh dear. Never touched python before this monday, entering late because I wasn't sure if I could get something working. Game is going to be a very low-fi platformer (surprise surprise).


1% of respondents wished to disqualify the entry.
Respondents: 36

Thanks for all the kind comments. I'm very much aware of the lacking gameplay elements - stupidly enough I left the actual game code/rules until I didn't have any time left at all... And the level was very much a 5-minute hack too.

I started tinkering with a post-compo version, made a longer level, then I figured I needed some music so I started fiddling with a music app I've been developing since April. I ended up putting in a LOT of code work there and now it's looking like it might finally be coming to an end.
As soon as I feel the music app is at a presentable state I'll put up a public beta (will link it here as well for anyone interested) and get started making some tunes for the game. Then I'll finish up some of the gameplay tidbits that are still missing and _finally_ start adding more enemies and levels.

There will be a post-compo version. Only thing uncertain is the scope of it and the time of delivery. Hopefully by next weekend. Stay tuned.

Phews, after tons of server trouble I managed to upload the game at 23:59... Too bad it won't let me upload a new screenshot. You can't die unfortunately, but an honest player closes the game after he reaches 0 health ;) Can't win either, just try to kill all the enemies. Controls: Arrows left/right - move Z - jump X - attack Arrow down - hold for two seconds to "vanish", where you are transported to a parallel realm... same thing to go back. There is so much missing, I'll touch it up and provide a link to the post-compo version sometime tomorrow perhaps.

Progress is a beautiful thing

Added a lot of critical elements this morning, mostly interaction between player and enemies. You can now get hurt by contacting an enemy (will cause you to get thrown back and lose health) and you can hurt them back with your sword. I will take a little break now, get some fresh air while the sun's still up. Then I'll start working on a level editor to get some more interesting scenery in there. Hopefully I'll have at least 2-3 hours left in the end for content creation.

Ok, so I've officially entered then... Got my first working python app together yesterday and have been adding basic platforming action and animation today. I'm about to get a simple enemy in there to have all the necessary components, then it's off to write a level editor. Hopefully I'll be able to focus on content creation the last day. Python is fun!