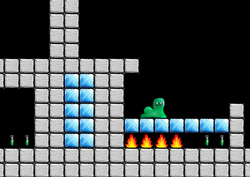 Makin' a game called "gloopy" about some kinda blob that attaches to things.


6% respondents marked the game as not working.
2% of respondents wished to disqualify the entry.
Respondents: 28

First real day has come to a close and after something like 15 solid hours of work we've come up with our concept, have an easy way to generate levels, pretty graphics, and working code. Still a lot of gameplay to work on but things are looking good. Tomorrow we hope to be able to get some monsters added, more animations, and work on environment interaction a bit.

Chris was busy in the morning and I slept all day, so we didn't get a whole lot done. I cleaned up the animation code and Chris worked on some new animation graphics and drew up our fire monster, Drakko. Hope to make some serious progress during the week though.

Change of name, and an animation

Something cool, then some lame babbling. First something cool; there's an animation for Drakko up. Uncolored and the like. Basically, I was going crazy trying to animate the walkcycle for this character, but my friend Grumbel (real name Ingo Ruhnke) made a nice animation for me. It looks good! Really good, in fact. I look forward to coloring it.

Tried making a background, but it completely, totally sucked. For some reason, I had this idea that if I had this repeating background of twisted pipes, it would really be awesome. Instead I ended up with a Windows 95-esque desktop background.

So. A bit of background on the project... Jeff (codexile) and I were brainstorming on ideas that resembled "Twisted". We thought of a game where you run up a spiral staircase and avoid falling objects, but that seemed kind like it would be difficult to code. Then we thought of a tornado rampage-esque destroying a city, and that seemed like it would be hard to make interesting.

"Maybe twisted, like gumby?" And we started to talk about twisting appendages and stuff.

Then jeff mentioned a concept I had sketched up and discarded two years ago, for a game where you have a blob that attaches to characters, and you control them. (It was a really tiny sketch, you can find it here) And we started thinking, "yeah, twisting around monsters to control them, that's the game!" So we immediately started fleshing that idea out.

And all has been going well, but then Jeff did a google search and it turns out there's already another game called Blobbit. What else to call the game? No other name seems really good. So far we're just thinking we'll call it "Globbit".

We're shooting for a playable demo on Thursday night. It'll be awesome, I promise. Think of Kirby, but more puzzle-esque, and instead of stealing the powers from the enemies, you actually take control of them.

title says it all.

Well, another day has gone by. Today we got collision detection, gravity, and some more graphics in the game. Tomorrow we're going to try and have a playable demo out. We hope to have a basic level with one monster and the ability to control that monster and break through obstacles. All that's in our way is a base monster class, a few more images, and piecing it all together! Whoo!

Wow, it's been a long night and we both have work very soon.

We did so much I hardly know where to start. Secondly we're so tired, we hardly know what we're saying. We. You. Huh? Kaleidoscope.

So, we've laid the groundwork and so it's pretty easy to generate content at this point. In this demo you can jump on Drakko, the first monster in the game, to twist around him and take control of his abilities.

Right now you can't be hurt, and you really don't have anywhere to go, but feel free to explore and have fun! We definitely have a lot more work ahead of us, the game is nowhere near complete, but we wanted to get something out there.

Some of the images are a bit off, and we seem to have some lag issues, but we hope you still find it enjoyable!

Wow, pyweek has come to a close. All I can say for us is that we had a blast!

It was a week of pizza, bawls, indian food, and chaos as we raced against time to get our (admittedly) overambitious project out the door. We both do python programming fulltime, but both came into this contest with very limited pygame knowledge.

The pinnacle of pyweek had to be those last three hours. We were running out of time and our game was very unpolished to say the least. Movement was very skippy, we had no music or sound, couldn't detatch from monsters, couldn't take damage, and so on and so on. There was a lot left to do!

Somehow, we managed to wrap things up quite nicely and then ... it happened. The last 30 minutes of pygame everything that could of went wrong, did go wrong. Still, we ended up submitting our md5 at 0:00UTC on the dot. Sadly, we didn't have time to fix a few bugs that cropped up at the last minute. One bug is that the level stops scrolling after a certain point, which sort of puts the kaibosh on our first level.

All in all we consider our project to be successful. We don't have a full level and the code can still be buggy at times, but we pulled things together into what we consider a pretty polished game for never having worked in pygame before. We're both really proud of what we did manage to accomplish, and frankly, neither of us thought we would make it nearly as far as we did. We both learned a lot during this competition and plan on continuing development on this game post pyweek.

Anyway, hope you all enjoy what's up there. We anxiously await the next pyweek!

There is a bug in our final release that prevents the full level from being displayed on screen. We had some revision control snafu's and we ended up releasing an old version of the code. If you care to see the rest of it please edit lib/levelparse.py:66 self.engine.level.rightmost_pixel = gotx to self.engine.level.rightmost_pixel = goty thanks! jgib